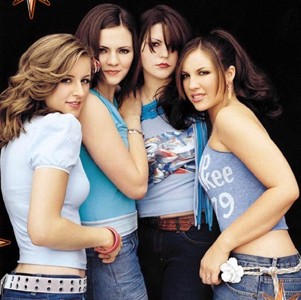 The Donnas take ‘Gold Medal’ to the county fair

When the Donnas made their 2002 CD Spend the Night, the band had a specific motive for making it a fast and hard-rocking record from start to finish.

“It was our first major-label record, and we had a really big goal with that one,” says Torry Castellano, drummer for the all-female band. “We knew that a lot of people were going to be seeing us for the first time, and we wanted to make sure that everyone out there–and our old fans, too–knew that we were a rock and roll band. So we wanted to play loud and at 10 the whole time and kind of make it our ‘c–t rock’ kind of thing.”

But for the band’s follow-up CD, Gold Medal (Atlantic), the Donnas put themselves under no restrictions. The resulting record may very well redefine the musical image of the group, which includes singer Brett Anderson, bassist Maya Ford, guitarist Allison Robertson and Castellano.

Aptly named considering the county fair tour they’re on this year, including a stop at the Napa Town and Country Fair on Aug. 11, Gold Medal is easily the most diverse Donnas’ record yet. The CD definitely rocks–in fact, it’s tougher sounding than any of the band’s other releases–but this time the band moves away from the punky hyped-up tempos that have long been a Donnas trademark.

“Don’t Break Me Down,” for instance, verges on metal, with its trudging guitar riffs and deliberate, pounding beat. Other songs, such as “Fall Behind Me” and “Is That All You’ve Got for Me” also downshift the tempos and, as a result, sound more spacious and dynamic. On the title song, the Donnas settle into a rollicking folkish feel that is an entirely new direction for the group.

Gold Medal also stands as a departure lyrically. Up to now, the Donnas have been known for writing funny and sarcastic songs, many about guys, both the dreamboats and the losers, and some that target snobby girls and knock them down a few pegs. Many songs here take a turn in a more serious, thoughtful and personal direction. For example, “Friends Like Mine” examines the fickle nature of friendship, while “Revolver” touches on the “what comes around goes around” nature of deceit.

According to Castellano, the Donnas wanted to stretch in order to avoid feeling like they were writing to a formula or being typecast as musical and lyrical one-trick ponies.

The Donnas’ fear of typecasting is understandable given perceptions that have surrounded the group over the years. Anderson, Ford, Robertson and Castellano first got together to play as band in 1993 at a school talent show in their Palo Alto hometown. They were 14 at the time.

Billing themselves as the Electrocutes, the group originally pursued a harsher, more complex sound. That musical direction began to change when they met local musician and aspiring band manager Darrin Raffaelli. He had the idea to rename the group the Donnas and convinced the girls to all use the first name “Donna” and the first initial of their last names as stage names.

Raffaelli played a key role in the songwriting and production for the band’s first two CDs. With the release of their third, 1999’s The Donnas Get Skintight, the band members took control of their music, parting ways with Raffaelli and taking over all songwriting. Skintight boosted the Donnas’ profile considerably, as more critics discovered the group. But it wasn’t until the release of their 2001 disc, The Donnas Turn 21, that the press really began to take notice, setting the stage for the group’s move from indie pop-punk label Lookout Records to Atlantic. Spend the Night followed very much in the vein of the preceding two records with its rapid-fire, sugar-sweet rock songs.

The Donnas live set figures to showcase a good chunk of Gold Medal‘s material. Castellano says that about a half-dozen new songs have been included in the set. But she also said the show has a few treats for longtime fans as well.

“We decided to bring back a few songs from the first three records that we haven’t done in a really long time,” Castellano says, joking that it took the band some effort to relearn the older tunes.

“We were listening to our iPods trying to figure them out,” she laughs. “We used to play them so fast I can’t even believe it. It’s like, how did I used to do that? But I think people who know those records will be excited.”