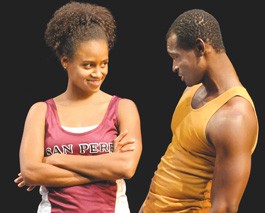 It won’t be easy to describe Tarell Alvin McCraney’s remarkable and truly original trilogy The Brother/Sister Plays. Though constructed from familiar theatrical elements, and filled with stories and characters borrowed from Spanish literature and African mythology, the resulting three-play mashup is almost certainly unlike anything you’ve ever seen onstage before.

Over the last few years, McCraney, who will turn 30 in October, has become a serious international sensation, winning awards and commissions around the world. He is a member of the D Projects Theater Company in Miami and Steppenwolf in Chicago, and in 2008, at the age of 27, was playwright-in-residence with the Royal Shakespeare Company.

In a first-time-ever collaboration between three award-winning theater groups—Marin Theatre Company, Magic Theatre and A.C.T.— McCraney’s full trilogy is being staged over the next several weeks, giving Bay Area audiences a rare opportunity to catch the playwright’s fully realized vision.

First out of the gate is In the Red and Brown Water, running through Oct. 3 at MTC and directed by Ryan Rilette. On a deceptively simple set, a square platform at the center of a bare stage, nine actors stomp, clap, sigh, breathe, laugh, sing-—and watch, as McCraney’s bittersweet story unfolds in what he poetically describes as “the distant present.”

Oya (played with gradually evaporating dignity by Lakisha May) lives with her mother in a housing project in the fictional Louisiana town of San Pere. Known for her speed as a high school track runner, Oya dreams of escape from the poverty and low expectations that define her community. Fate has other plans for Oya, as we guess when her childhood friend Elegba (a mesmerizing Jared McNeill) recounts a haunting dream in which he is baptized in red and brown water—brown from the river mud, red from Oya’s blood—as the young woman floats by to the music of skeletal “bone people.”

When her mother (Nicol Foster) grows ill, Oya is forced to make a decision that forever changes the course of her life, threatening to doom her to a fate as someone’s wife, mistress or mother. It is Oya’s growing desire to have a child of her own—with McCraney borrowing elements of Lorca’s Yerma—that sets up the primary conflicts of the play.

The entire cast is excellent, fulfilling the demanding requirements of the script with energy, passion and physical grace. The fusion of McCraney’s vision, director Rilette’s sensitive staging and the actors’ commitment, adds up to an experience that is wholly one-of-a-kind, from the first ominous breath to the beautiful and devastating final images.