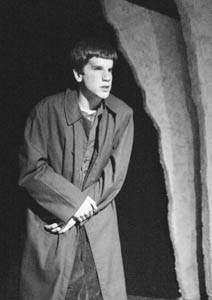 ‘The Cripple of Inishmaan’

THE CRIPPLE of Inishmaan, now playing at Actors Theatre, is set in 1934 on an island off the west coast of Ireland, where the big news among the locals is the recent arrival of an American film crew on the neighboring island of Inishmore. The film being made is Robert Flaherty’s Man of Aran, one of the first Hollywood “documentary-dramas.” (Actors Theatre shows a videotape of the film in the lobby during intermission.) Its depiction of rural life portrayed the islanders as a harmonious community of people “untainted by the corruption of the outside world.”

This idealized view had a great influence on American perceptions of the Irish, although–as playwright Martin McDonagh suggests–the reality of life on the Aran Islands was probably a good deal less than romantic.

The social circle on this island is downright vicious, thanks in no small part to the efforts of Johnnypateenmike, the local “news man,” whose occupation in life is the spreading of malicious gossip in exchange for free food. Brian Shears looks every inch the part of the irascible Johnnypateen and, despite being occasionally tongue-tied by the brogue, gives a credible, slyly subversive performance.

“Ireland mustn’t be such a bad place, sure,” Johnnypateen says, “if Hollywood film crews want to come there.” This is a refrain echoed by most of the other islanders, who are partial to refrains in general. The two aunties Eileen (Phoebe Moyer) and Kate (Coralie Persse), regulars on Johnnypateen’s route, repeat themselves so often that their dialogue begins to sound ridiculously existential. McDonagh is tweaking the lucky-charms Irish stereotype, turning up the quaintness factor, the better to disturb us with the offhand cruelty of his characters.

Johnnypateen, for example, encourages his 90-year-old Mammy (Beverly Bartels, under plenty of makeup) to drink herself to death; this is both funny and horrible. Slippy Helen (Laura Odeh), a local girl, throws raw eggs at anyone she dislikes, particularly her simpleminded brother, Bartley (Brendan Ryan). And everyone mocks the ugliness of Cripple Billy, the most vulnerable inhabitant of the island. “Do you like me?” Billy asks Helen, and she responds tartly: “Would you like you if you weren’t you?”

Cripple Billy is played by Aidan O’Reilly in one of the most striking, seamless performances in local theater this year. O’Reilly heaves himself around the stage with the left side of his body twisted and immobilized, using the awkward efficiency of someone who’s been doing it all his life. (So convincing is his body language that it is actually startling to see him stand upright for the curtain call.) With a flawless accent and a seriocomic approach that is spot-on, the performance of this very talented young actor anchors the whole ensemble.

Brian Bartlett’s set design is also perfectly suited to the barbed-tongue-in-cheek tone of the play. The rough trapezoids of wall, door, and shelf are absurdly off-kilter, like something out of The Flintstones. It is the visual equivalent of blarney, which is McDonagh’s theme.

The way of life on Inishmaan is eccentric, no doubt, but how much of it is truthful and how much is colorful exaggeration? Again and again, the audience is set up for an “appropriate” emotional response, then surprised into uncertainty. The Cripple of Inishmaan is a prickly valentine to a part of the world where life is harsh, but never hopeless. Ireland mustn’t be such a bad place, sure, if plays like this are written about it.