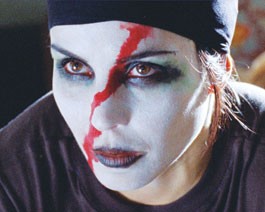 Lisbeth Salander is back. That matter may be more important than the sometimes eyebrow-raising plot of The Girl Who Played with Fire. At a certain point, Hitchcock’s excuse (“Nobody calls the police because it wouldn’t be fun if they did”) can only go so far.

This second installment brings Salander back, played by Noomi Rapace as a ratty but invincible urchin: 80 pounds, five feet tall, black-dyed hair, wardrobe by CBGB. She’s been sorting out the people who have wronged her since she was age 12. (The film’s sick-joke title refers to the crime that sent her up the river: barbecuing her abusive father with a can of gasoline and a match.) She’s armed with brilliant computer-hacking skills, a pistol and a stun gun, the latter of which is used on many pairs of deserving bollocks. That this movie has a tendency toward bollockisms isn’t quite her fault.

Meanwhile, investigative journalist Mikael (Michael Nyqvist) meets a new young writer working for Millennium magazine. He and his sociologist girlfriend are trying to expose the sex-slave trade conducted out of the former Soviet Union, apparently abetted by the Säpo, the Swedish secret police. Both are soon liquidated. Lisbeth is suspected of the killings and has to go on the run to find the real culprits.

It all comes together with help from the ever-clutching Hand of Coincidence. Director Daniel Alfredson is trying to create a Euro answer to Americanized thrillers by gentling them with humanism; we pause to see Mikael shaking his heavy head over every dead body, stoutly maintaining that Lisbeth is not a killer. Match this with the kind of sexual politics unseen since the 1970s in film.

Lisbeth is an old-fashioned pulp heroine in a pulp plot. Her opponents are thoroughly dirty and include a hulking, muscley henchman whose strange medical condition makes him analogous to one of the minor 007 villains (hint: The World Is Not Enough). The muscleman’s boss is a scarfaced head villain “who speaks six languages fluently,” even if he should have smarter hiring practices. When you try to dispatch a pair of heroes by locking them in a barn and setting it on fire, it’s not because that’s an efficient way of killing someone; it’s because everyone wants to see a barn burning.

No one can say they haven’t seen this movie before; they just haven’t seen it in Swedish before. And while this series is about the stodginess of Sweden, it is also a feature-length postcard for the country. Maybe Sweden wouldn’t be attractive to tourists unless it seemed a little dangerous?

Yet Peter Mokrosinski’s cinematography exemplifies a current trend, what Todd Miro’s Into the Abyss blog describes as “that color-grading virus that is teal and orange.” We probably can’t stop them from digitally intermediating every film until it’s almost duotone blue and gold, but at least we can make them self-conscious about it.