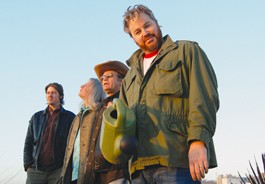 That Much Further West

Being twangfully high on I See Hawks in L.A.

No area of the country has produced what’s commonly called “cosmic American music” with such frequency and authenticity as Southern California, that strange, hot land that feels to us in NorCal like a different planet, let alone a different state. I See Hawks in L.A. are quite simply one of the finest exports from the land of contradiction—concrete and flowers, asphalt and palms, tanning salons and beaches—and their vision of life down south is one that’s as much influenced by their rugged neighborhood of Echo Park as it is Nashville twang. An added psychedelic element is key to the band’s sound, emanating from bassist Paul Mitchell’s time spent playing with Strawberry Alarm Clock—that’s him singing in Russ Meyer’s Roger Ebert&–penned camp classic Beyond the Valley of the Dolls—and evidenced by the band’s swirly ode to their northern neighbors, “Humboldt.”