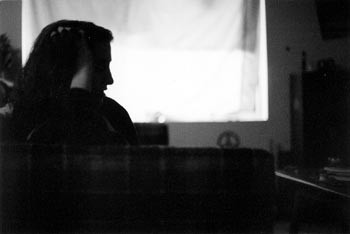 Cry for Help: “I thought I was the only one who feels this way,” says Heather, a Santa Rosa teen who has struggled with intense feelings of alienation, “but that’s so untrue.”

With suicide rate soaring among local teens, forum will search for solution

THINGS FINALLY SNAPPED a couple of days after New Year’s for Heather Cartwright, a bright and sensitive 18-year-old Santa Rosa Junior College student. Family issues, trying to cope with the holidays, and the difficult breakup with her boyfriend earlier that morning were suddenly intolerable.

“I completely lost it,” she confides. “I couldn’t deal with the pain.”

In desperation and under cloudy skies. Heather drove to the Golden Gate Bridge where, for several hours, she wandered back and forth across the chilly span contemplating the jump into the freezing bay more than 249 feet below. All afternoon she stood there crying, but no one stopped.

“I was leaning over the edge and suddenly I got really scared–scared that it would be so final,” she recalls in a shaky voice.

Heather got back into her car and drove home.

It’s been a scary pattern for the Santa Rosa teen, who is an engaging girl with wavy red hair and a sweetly shy smile, and whose goal is to become a teacher with a degree in child psychology. Curled up on a plaid sofa in her cozy sitting room with her ginger cat, Sid, while the rain beats monotonously outside, Heather says that looking back through old journals reveals that she’s had suicidal thoughts since the age of 15. Two months before the Golden Gate Bridge incident, Heather had overdosed on pills and alcohol. “I took everything I could find,” she says. Before that, she had halfheartedly tried to slit her wrists. “Partly for attention or as a cry for help and partly to feel physical pain instead of emotional pain,” she explains.

“And I thought I was the only one who feels this way, but that’s so untrue.”

She is right. Every year, thousands of youths die in North America, not from cancer or heart disease, but by their own hand. Statistics show that, in most U.S. states, suicide is the third leading cause of death among 15- to 25-year-olds (after homicide and automobile accidents), and it’s the second most frequent reason teens are hospitalized. The adolescent suicide rate has tripled since 1960–the only age group for which an increase has occurred over the last three decades.

Pickar will co-host a workshop on comprehensive treatment of suicidal adolescents, at an upcoming three-day conference in Santa Rosa and Sonoma called “The Crisis of Youth Suicide: Identifying and Helping Teens at Risk.”

“The goal [of the conference] is to reduce adolescent suicide in Sonoma County,” says conference coordinator Natalie Beck of the Sonoma County Academic Foundation for Excellence in Medicine. “Our feeling is that suicide is preventable and many people are interested in the issue, but there has to be a cohesive way to bring people together.

“We see this as a first step to get the county mobilized on the issue.”

The conference will include six workshops taught by a range of experts, as well as discussions by a panel composed of adolescents who have attempted suicide and parents whose kids have either attempted or committed suicide. The event is geared to those who work professionally with adolescents but also is open to community members.

According to Pickar, in Sonoma County there were three teen suicides in 1993; two in 1994; three in 1995; seven in 1996; and six in 1997. He adds that a national survey taken in the past year indicates that one out of every four high school-aged teens has considered suicide. One out of 10 has attempted it.

While girls attempt suicide two to three times more often than boys, males commit suicide at a rate of about three to one. In Sonoma County in 1996, five out of the seven suicides were males and two were females; and in 1997, all six were males. In addition, males use more lethal means. Five of the six suicides last year were from self-inflicted gunshots, and one was a hanging. Pickar says females tend toward overdose or self-cutting.

Experts also point out that there’s a disproportionate number of suicide attempts and completions by gay teens. “Thirty-five percent of all attempts and actual suicides committed by youths between 14 and 21 are gay, lesbian, bisexual, transgendered, or questioning individuals,” says Jim Foster, a counselor with Positive Images, a local support group for teens struggling with these issues. “It’s because of internalized homophobia, sexual-identity issues, and isolation. These kids don’t dare open up to anyone. They may think it’s acceptable in society to come out, but it’s not safe. Then they get into despair, and gay teen depression is lethal.”

THE PROBLEM OF teen suicide needs to come out of the shade,” says Susan, a Petaluma mother whose daughter Megan, 15, gulped down 200 painkillers on July 4 while her mom worked in the garden. Fortunately, the teen was found in time and rushed to the hospital. “People do have suicidal thoughts, and the more the public and health-care officials realize it’s a common human feeling and we shouldn’t be taught to hide it, the better.

“Teens have so much more on their plate now–it’s double and triple the pressure.”

The reasons for the rise in teen suicides are considerable and complex–from the influence of peer pressure and what’s happening in the school environment, particularly regarding sexual-identity and ethnic issues (young African-American men also commit a disproportionate number of attempted and completed suicides, says Foster); to parents being less available, high rates of divorce, and the breakup of the nuclear family.

Common motivational factors that play into teen suicide are self-punishment and retaliatory abandonment. In both cases emotional pain and resultant anger are clear contributors. “Some teens have an overpowering sense of self-blame and exaggerate their own shortcomings,” says Pickar. “A number of high-achieving kids do poorly and can’t handle it.”

For the individual who feels the pain of chronic emotional abandonment by his or her parents, the act of suicide may be the only way the teen can convey his or her pain. Plus, adolescents tend to respond more quickly and more dramatically to a situation than do adults.

There’s also pressure on teens to grow up too quickly in a harsh culture that does not support them, experts say. “They have sexuality thrust in their face by the media, the movies, and everything else,” says Pickar, adding that gothic rock groups glorifying violence, self-mutilation, death, and suicide may attract a segment of vulnerable kids who are struggling with alienation from society and with depression.

Indeed, the father of a 15-year-old Burlington, N.D., boy claims his son shot himself in 1996 after listening to fright-rocker Marilyn Manson’s lyrics, including a song he called his son’s favorite, “The Reflecting God”: “One shot and the world gets smaller./ Let’s jump upon the sharp swords and cut away our smiles./ Without the threat of death, there’s no reason to live at all./ My world is unaffected, there is an exit here.”

But Heather disagrees that music could cause someone to pull the trigger on oneself. “Depression is an illness and anyone can get it. It’s not caused by songs or movies,” she says. “I want people to understand that, and I want them to know the only thing that saved me was when I reached out my hand and begged for help and trusted the people around me to do what’s best for me.”