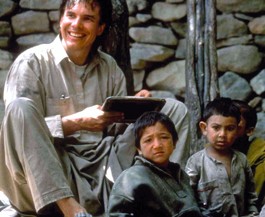 Teach One, Each One

Greg Mortenson didn’t start out to change the world. All he wanted to do was to climb K2 and honor the memory of a sister who had recently passed away. But as his days spent trying to top one of the world’s toughest mountains grew to number in the 70s, Mortenson realized he was beat. Retreating back down to ground level, he spent several weeks recuperating in a Pakistan village. There he saw children learning to write by using sticks to draw in the dirt. And there he saw how uneducated women suffered.

Mortenson’s efforts to educate children, particularly girls, in Pakistan and Afghanistan resulted in the bestselling book Three Cups of Tea. Now required reading for all top U.S. military leaders, Tea tells most Americans more than they would ever know about the tribal politics and indigenous ways of people Machiavelli never heard of but would greatly admire.

Mortenson returns with Stones into Schools: Promoting Peace with Books, Not Bombs, in Afghanistan and Pakistan, picking up where Tea left off as he further recounts his efforts to build schools, reach out to illiterate women and succor those injured and bereaved after the great 2005 earthquake decimated Kashmir and parts of Pakistan. Nominated for a Nobel Peace Prize this year, Mortenson is the cofounder of the Central Asia Institute and of Pennies for Peace, for which U.S. children have raised millions to build Central Asian schools just one penny at a time.