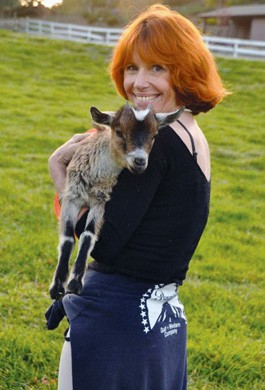 Kathleen White didn’t need words to prove to the managers at Shelton’s Natural Foods Market that her cheesecakes deserved a place on their shelves. She simply walked into the Healdsburg store with a written introduction and plenty of samples.

White didn’t always plan on being a baker. She’d had a 25-year career as a professional dancer and actress in Los Angeles and on Broadway. But in 1990, White contracted viral meningoencephalitis on a weekend trip and fell into an 11-day coma. When she woke up, she was unable to speak. Though some of her speech slowly returned, she lives now with what she calls a speech difference.

Not that she needed to talk up her goat cheese, pistachio crust cheesecakes to the market. The taste said it all, and they’re now available in bite-size dozens ($25) at Shelton’s.

It’s a new career that fits the energetic redhead well. White was thrilled by the local food and wine bounty of Healdsburg when she moved here in 2008, and after formally trying goat cheese for the first time, she knew she had to find a way to use the product. Speechless Cakes is her one-woman mail order business, the name in homage to her own experiences and how she hopes people feel after tasting a slice.

“The name Speechless . . . is strong in so many levels,” writes White in an email. “Moreover, it is that good!”

White bakes at Healdsburg’s Costeaux French Bakery, which allows her use of its kitchen, and runs the business from her Blackberry. For the current holiday season, sales are brisk, but White strives to keep every aspect of her enterprise grounded. “The cakes are made from local ingredients, baked in a local kitchen,” she explains, and “the look of the cheesecake is homemade.” White’s cheesecakes are available in just one variety, though special ingredients and lactose- and gluten-free cakes are possible by request. Lime zest and kiwi coulis add a touch of high-end flavor. Along with the small bites, customers can also order four- and seven-inch rounds online ($25&–$40).

Rather than succumb to circumstances, White returned to school after her illness, earning a master’s degree in theater arts in 1999 and a bachelor’s degree in law studies in 2004. Throughout it all, White says, she’s “rediscovered hope.” And White isn’t done performing, either—though the stage is now smaller and smells slightly of livestock. In her spare time, she dances with Lulu, her sponsored Nigerian dwarf goat at a farm in Penngrove.