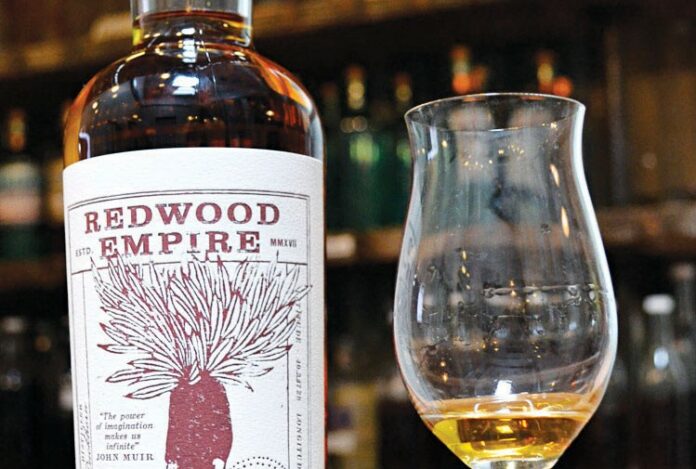 What’s this about American whiskey not having the same good reputation as Scotch whisky, Irish whiskey or even Canadian whisky? Sad to say, it’s true, according to Jeff Duckhorn, head distiller at Redwood Empire Distilling in Graton. But what about the currently unquenchable consumer thirst for American spirits like bourbon and rye? It’s all in a name.

Pipe Dream is the name of Redwood Empire’s newest product, which joins a lineup that includes a rye named Emerald Giant and a blend of straight whiskeys named Lost Monarch. Duckhorn explains that the category “American whiskey” is seen by consumers as somewhat downmarket, even if it contains the very same blend of whiskeys distilled across America in Indiana, Kentucky, Tennessee and California. It’s all more or less the same stuff—except now there’s more of that California stuff.

When I toured this cellar two years ago, it was creaking with crusty, old casks that’d spent years in rickhouses back East. This time, it’s brimming with new oak barrels that Duckhorn and team have filled in batches, four at a time. Selecting the oak makes a difference in the glass, says Duckhorn. He likes oak staves that are aged for 36 months before they’re made into a barrel, for a softer whiskey, and he’s even experimenting with Oregon oak. But before we get lost in the woods, Hey, aren’t those whiskeys named after famous North Coast sequoias? Yes, and the labels bear quotes from naturalist John Muir. The distillery connects the themes by partnering with Trees for the Future, which pledges to plant one tree, mainly in tropical areas facing deforestation, for each bottle sold.

While building up stocks for a “bottled in bond” whiskey, which must be distilled in Graton and aged there for four years, Duckhorn blends up to 10 percent of his own “grain to glass” whiskey with the purchased spirit.

Redwood Empire Pipe Dream bourbon ($44.99) has a warm, spicy character, and while dough and caramel round out the palate, it isn’t overly sappy or woody with oak. It’s got some earthy spice, a hint of banana peel, and cinnamon and is a big success on the rocks.

Spice fans will find something to like in the Redwood Empire Emerald Giant rye ($44.99). If not quite like cereal grains fresh-picked off the stalk, crushed between fingers and inhaled, that’s where the spicy grain aroma is going. Dry on the palate, it’s backed up by woody, caramel flavor. Softer yet, with juicy grain flavor and herbal overtones, a small flask of Redwood Empire Lost Monarch blended straight whiskey ($44.99) will make a fine companion on my next walk with nature.