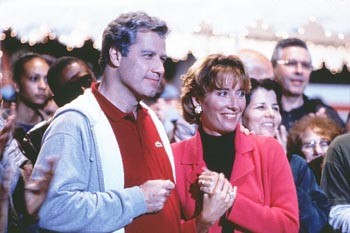 In his ongoing quest for the ultimate post-film conversation, David Templeton calls up infamous political satirist and publisher Paul Krassner to gauge his reaction to the much-hyped film version of Joe Klein’s insider novel Primary Colors.

LAST WEEK IN VENICE, Calif., renowned comedian/ publisher/prankster/counterculture hero Paul Krassner was in a playful, spontaneous, court-jester kind of mood. He’d just seen –the much-hyped political satire about a Clinton-like governor (John Travolta) running a rough-and-tumble race for the presidency. Upon leaving the theater, he was inspired to see a long line of filmgoers waiting to see the movie.

After a short burst of laughter, Krassner adds, “Though it’s not like I really ruined anything for anyone. Everyone knows the film is based on Clinton. And everyone knows Clinton got elected!”

Since 1958, when Krassner first began publishing the legendary satire magazine The Realist, he has been gleefully working the line of the American consciousness, irreverently daring to point out the truth as he sees it, in spite of the consequences. Unapologetically progressive, Krassner holds the happy distinction of once being labeled “a raving, unconfined nut” by the literary critics at the FBI. As he prepares to discontinue The Realist at the end of the century, he’s been busy writing and performing. His most recent book, The Winner of the Slow Bicycle Race: The Satirical Writings of Paul Krassner (Seven Stories Press, 1997), is classic Krassner: sharp, funny, and outrageous. He’s just finished a non-fiction book, The Trial of Peter McWilliams, and continues to record his infamous spoken-word comedy albums such as Brain Damage Control (Mercury Records).

AS ONE SATIRIST judging the work of another–in this case, Washington columnist Joe Klein, the formerly anonymous author of Primary Colors–Krassner enjoyed the movie’s fable of a donut-chomping, hormone-driven presidential candidate willing to give up all his ideals in order to win his way to the White House. On the other hand, he suggests that the recent events in the real Washington are actually a whole lot funnier than anything in the film.

“Reality keeps nipping at the heels of satire, and in this case overtook it, I think,” Krassner says. “To me it’s anticlimactic to what’s going on in real life, which is just incredibly entertaining. It’s better than any soap opera.”

“There are those,” I remark, “who wish we’d all stop wasting so much time on the president’s sex life and turn our attention to serious matters, like the expansion of U.S. military actions.”

“Face it, we can identify with the sex stuff better,” he replies. “The public can’t identify with the incredible slaughter that’s going on in Uganda, for example. It’s just beyond our ken to think of drafting little kids into the army and killing them if they won’t cooperate. But this–this they can identify with because it’s just simple horniness.

“I just wrote, for The Realist, a sneak preview of Monica Lewinsky’s memoir,” he continues. “And of course this is an extension of my own explanation of why Clinton’s popularity remains so high–I have her write, ‘Remember when Jimmy Carter said, “I have lust in my heart,” and he won? He got the adultery vote. But Carter only had lust in his heart while Clinton is a full-fledged activist.’

“But it’s true of power,” Krassner adds. “You can be a rock star or whatever–every camp has its followers, and there are always groupies. People in power expect to get laid. It’s one of the perks.”

“As far as the film goes,” I wonder, “aren’t we putting unnecessary emphasis on the sexual aspects of the story? At the core, the main question of the film is, How can we know that a person who steps on people on the way to the presidency is necessarily going to be a bad president?”

“Yeah, that’s the basic question, isn’t it?” Krassner answers. “Nobody’s all good or all bad. We’re the only species that rationalizes. So politicians can rationalize what it takes to get into office, in order to do good things once they get there. That’s always been the case.

“I go back to the Indian guru Sri Ramakrishna, who, when one of his disciples asked, ‘Why is there evil in the world?’ said, ‘To thicken the plot.’ It’s part of the human drama that there are these imperfectionist streaks in us. And, you know, the desire to become the leader of the Western world can be a pretty strong motivation to rationalize minor infractions of ethics.”

Krassner pauses a moment, then says, “The movie did give you a flavor of that conflict, I think. You saw that people are this weird mixture of idealism and pragmatism. That the John Travolta character–and Clinton in real life–have a real desire to do good, but that they are willing to sacrifice a little of that in order to gain the power to do good.

“And that the truest idealists often end up bitterly disappointed,” he adds.

As for the national pastime that is the current White House sex scandal, Krassner feels it is reflective of our evolution as a nation.

“I think that this is all a kind of national coming of age,” he observes with a laugh. “America is a sort of adolescent country, still. Complete with an obsession on locker-room humor. I guess the theory is that we’ll someday grow out of it.”