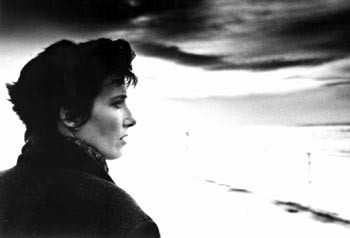 Mother Love: Emma Thompson plays opposite her mum in ‘The Winter Guest.’

W EARY AND AT THE END of a multicity publicity tour to promote his latest book, writer David Malouf, who lives part of the year in Sydney and part in rural Tuscany, has taken the afternoon off to go to the movies in San Francisco. The film is The Winter Guest, directed by Alan Rickman and starring Emma Thompson and her mother, Phyllida Law; it’s a marvelously subtle, lyrically emotional story in which almost nothing happens.

In a seaside village in Scotland, the water along the coast has frozen solid, and four pairs of characters–each in their own stage of either iciness or thaw–spend the day wandering about, talking, arguing, and complaining: two boys have skipped school to play near the ice; a pair of elderly women ride the bus to a funeral; two teenagers awkwardly play at sex; and a just-widowed photographer (Thompson) is unexpectedly visited by her outrageously independent mother (Law).

“I quite liked the film,” Malouf states enthusiastically, between bites of a fruit salad at an outdoor cafe. “It surprised me! You could not have guessed from the almost plodding realism of the early part of the film that you would get to something so mysteriously symbolic as that last scene, with the two boys venturing out onto the ocean’s ice to see where it ends. This film is very much about the crossing of boundaries, isn’t it?” he asks rhetorically. “That’s a theme I’m rather fond of.”

In fact, it’s a theme that Malouf has spent his career exploring.

In several volumes of meaty poetry and a series of acclaimed novels–including the bestsellers The Great World (Pantheon, 1990) and Remembering Babylon (Pantheon, 1994)–humanity’s numerous cultural and psychological boundaries are examined and often pushed aside. In his startling, powerfully written new book, The Conversations at Curlew Creek (Vintage, $12), a pair of displaced Irishmen–one a condemned criminal, the other a ranger sent to oversee his hanging–talk through the night, comparing lives and ideologies until their own deepest boundaries begin to blur and dissolve.

“A lot of that conversation there is interior,” Malouf says of the book. “What the narrative is creating is the inner voice of their feelings and interactions, but it’s not all something that they are actually able to say to one another.

“That’s what the film is also doing,” he points out. “It’s allowing these people to express things in words that they never would really express. They speak aloud their deepest apprehensions. Quite articulately.

“In reality, not everybody is articulate. Which doesn’t mean they’re not having feelings and apprehensions that are complex, but only that they don’t have the words to put those apprehensions into language. Therefore they remain unexpressed.”

“It’s often said,” I throw out, “that cloistered nuns and monks, those who’ve taken vows of silence, have amazing inner lives full of deep, calm thoughts that are never expressed.”

“And I’m not sure that’s true,” Malouf replies. “I would think that when you take speech away, the interior dialogue becomes quite frenetic. Just go away by yourself for 48 hours and speak to nobody, then see what’s happening in your head. It won’t be calm and quiet. I think there end up to be more and more voices in there, all shouting to be heard over one another.

“When I first took my house in Italy,” he illustrates, “I went there to write. It’s in a little village, where I knew nobody. I lived there for 10 months out of the year. I spent very, very long periods, numbers of days at a time, without talking to anyone. That kind of isolation was very good for my writing, but it’s quite painful.

“I did it for three or four years,” he laughs, “and I would not like to ever do that again.

“Something else about the movie: I liked the absolute dourness of it. That very, very dour Scot’s world–it’s everywhere in this film–in people’s fear of the body, in their denial of touch, and that very, very bleak landscape.” He pushes aside his plate. “Think about it: There was not a green leaf in the film. There’s almost the feeling that there could never be a green leaf again. Then when Emma says she’ll paint her house, ‘In the spring,’ you’re almost shocked to hear that this place has a spring.

“Some other cultures are at least determined to have a good time along the way,” he goes on. “The Italian world, for example, is very much a world in which the body is to be pleased, whether it’s by clothes, or sex, or food, or whatever. Life is mostly for pleasure. Death may cut life off, but don’t be living all the time just waiting for the last clod to fall on the coffin.”

From the January 29-February 4, 1998 issue of the Sonoma County Independent.