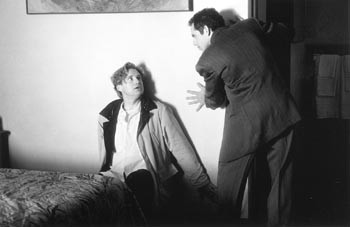 To each his own in ‘Zero Effect’

FROM THE STREET, Mickey McGowan’s tree-lined San Rafael house is surprisingly indistinct, almost invisible. It is not till you mount the front steps and come face to face with a front porch strewn with old, plastic doll heads and piles of floppy, shockingly weathered teddy bears, and a windowsill lined with weird, staring statuettes, that you realize you’ve entered the world of someone unencumbered by run-of-the-mill notions of standard home decorating.

This, in spirit at least, is the Unknown Museum, a world-renowned holding tank of odd, television-inspired memorabilia from the ’50s, ’60s, and ’70s. Although the museum is currently closed to the public, McGowan is featured along with the museum in the brand-new book Self-Made Worlds: Visionary Folk-Art Environments (Aperture, 1998). McGowan dwells happily with his wife, Finnlandia, here in this off-kilter wonderland of quirky fond remembrances and, in terms of the sheer volume of artifacts, complete sensory overload.

“If we were open, it would be far more chaotic,” says McGowan of the museum, leading the way into a kitchen cluttered with old metal lunchboxes, giant plastic hamburgers, jars containing pickled Pee-Wee Hermans, and open cabinets crammed tight with food products popular 40 years ago. “There’d be hanging mobiles of white sandwich bread, plus bathroom scales laid out like stepping stones to follow.”

I am reminded of a line in the foreword to Self-Made Worlds, describing the featured artists: “Remarkable manifestations of the idiosyncratic; the eccentric glory of the human imagination.”

Which brings us to Zero Effect.

Starring Bill Pullman as Daryl Zero, the world’s most private “private eye,” Zero Effect is a small, loopy film with original ideas and a twisted, emotionally satisfying foundation. Daryl Zero, one of the freshest characters to hit the screen for some time, is a master detective who is terrified of the world outside his heavily guarded apartment, a man whose eccentricities threaten to keep him apart from the woman he suspects is a blackmailer, and with whom he unexpectedly falls in love.

“I loved this movie,” McGowan exclaims. “Real, true, affectionate love. And Daryl! What a wounded puppy. I loved him immediately. You could tell right away that he’s mentally ill, obviously, but he’s a genius. From the moment you first see him, you know that if he didn’t just happen to have it together enough to do the private-eye thing, he’d be out on the streets or in some mental hospital somewhere, like a lot of crazy artists who get into a weird eccentric lifestyle and then can’t channel it into something productive.

“He’s a heart-on-my-sleeve, take-me-or-leave-me, I’m-messed-up, I’m-paranoid kind of a guy, standing there saying, ‘Here I am!’ Someone like me can relate to someone like Daryl Zero completely.” Laughing, he adds, “Well, not completely. Let’s just say I relate on many levels.”

For example, McGowan frequently employs a Zero-like mindset while scouring garage sales and exploring dumpsters in search of artifacts for the museum.

“I like his philosophy of ‘Why be looking for one thing when you can be looking for everything or anything?’ That’s the nutshell of his professional approach,” McGowan says, standing up to make some tea. “That’s the way I am when I go out to a garage sale or an estate sale: I’m looking for whatever happens to be in front of me. I don’t go out with something particular in my head.

“That’s conceptual shopping,” he adds, “and I certainly don’t subscribe to that.”

On the subject of eccentricity, my curator host is a practiced expert.

“Eccentricity is anything deviating from the norm, of course, whatever that norm might be,” he says, and then observes that in the book Incredibly Strange Music (ReSearch, 1993), in which he discusses his immense collection of rare, hard-to-find records, “I defined strange music like this: take Barry Manilow, who is not particularly strange in the United States. Well, all right, true, he’s strange, but he’s mainstream, or was at the time I first said that.

“But if you take a Barry Manilow record into a village in the African wilds,” he insists, “it would seem eccentric, at least certainly odd or strange.

“Eccentricity is not a bad thing,” he continues, returning to the table. “It’s actually very good. I don’t mind it when people label me an eccentric. I’d be surprised if they didn’t at this stage. I mean … ,” he opens his eyes wide and waves his arm in a sweeping circle, “… just look around you.

“There are sometimes unkind assumptions made about eccentric people, though,” he says. “I’ve been visited by reporters in the past who flat-out ask me things like, ‘Was your father as crazy as you are?’

“When the museum reopens, I plan to have a little card to hand out to reporters, with a list of questions I will no longer be bothered with. Or,” he leans forward, having a flash of inspiration, “maybe I’ll attach a pull-string to myself–like many of the great dolls of our time–with 12 standard answers to any dumb question.

“Reporters could simply pull my string and then just quote whatever comes out,” he grins, clearly warming to the idea.

And what answers would he program himself to say?