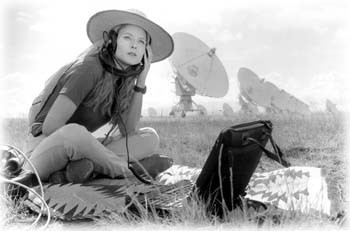 The Problem of God

Eugenie Scott and the linguistics of faith

Writer David Templeton takes interesting people to interesting movies in his ongoing quest for the ultimate post-film conversation. This time out, he takes anthropologist/educator Eugenie Scott to see Contact.

YOU KNOW WHAT I think?” asks Dr. Eugenie Scott suddenly. “I think we non-believers need to find a term other than ‘spiritual’ to describe many of our profound experiences. I wish we could find a word that means awe and wonder and excitement and love, without the supernatural twist that ‘spiritual’ has.”

As we wait for our coffee to arrive, we’ve been rehashing our favorite moments from the film Contact, a remarkably powerful drama based on the 1984 novel by the late scientist Carl Sagan. Concerning a worldwide clash between science and religion that occurs when radio signals from deep space are detected by a single-minded scientist, Contact stars Jodie Foster as Ellie, a woman whose intense empiricism becomes an issue when she volunteers to be the first emissary to the solar system from which the signals originated.

In one key scene, Foster is asked by an international selection committee if she is a ‘spiritual person,’ by which they mean, does she believe in God? She doesn’t, and, squirming uncomfortably, it is clear that she doesn’t like the ambiguity of the word spiritual.

“It must have been terribly awkward,” Dr. Scott continues. “I can certainly identify with her. How do I talk about something that is non-material yet is also non-supernatural? How do I talk about the awe that descends on me when I go to the top of a mountain? Or when I hear the Queen of the Night’s aria from The Magic Flute, and the hair goes up on the back of my neck?

“I don’t think those feelings are supernatural, but they’re not exactly material either. So I wish I could come up with a term–one that wasn’t clunky–to express that. ‘Non-material non-supernaturalist’ doesn’t exactly fall trippingly from the tongue, now does it?”

Scott, a physical anthropologist with a résumé full of distinguished teaching appointments, is the executive director of the National Center for Science Education, a non-profit watchdog group; headquartered in Berkeley, the NCSE has monitored creation/evolution skirmishes in public schools since 1982. Additionally, Scott was a recipient, in 1991, of the Public Education in Science Award from the Committee for the Scientific Investigation of Claims of the Paranormal, and serves on the National Advisory Council of Americans United for Separation of Church and State.

“I would agree with good old Thomas Henry Huxley,” says Scott, as our order lands on the table, “who said, ‘The only reasonable attitude for a scientist to take would be agnosticism, because you really cannot know if God exists, so you shouldn’t be an atheist.’

“For a scientist, ‘I don’t know’ is a perfectly acceptable answer,” she continues. “You don’t accept the first explanation that comes along. Somebody shows up and says, ‘Aunt Rosie can find water with a forked stick. She’s found it five times in the last 10 years.’

“OK. Is there another explanation? To me the best thing we can do in our society–in terms of teaching people to think–is to get children trained immediately to say, ‘Is there a better explanation?’ And of these explanations, which is the better supported when I go to nature and look for the support?

She ponders this a moment, then switches gears.

“I remember reading–when the Martian meteorite was discovered in Antarctica–about some religious leader saying, ‘Maybe God seeded the universe with the potential for life and is just waiting to see what kind of intelligent creatures arise to worship him.’ Which here turned out to be pentadactyl featherless biped–and who knows what it’s going to be on Alpha Centauri?

“That approach of God seeding the universe is a real deistic view that scares the bejeezus, so to speak, out of the conservative Christians, deism being the idea that God is the prime mover of the universe, the divine clock-maker who designed the universe, wound it up, and set it to ticking but doesn’t really give a damn. It’s the flip side of the view of a personal God who listens to all your prayers and believes in you. In deism, he’s there, but he’s off in the hinterland someplace not really paying attention.”

“I don’t have a problem with that idea of God at all,” I shrug.

“And that’s why agnosticism works!” Scott slaps the table. “You know, I saw a bumper sticker the other day,” she laughs. “It said, ‘Thank God for Evolution.’ I can appreciate that. I wish we had more people with that kind of sense of humor. It would make my job a whole lot easier.”