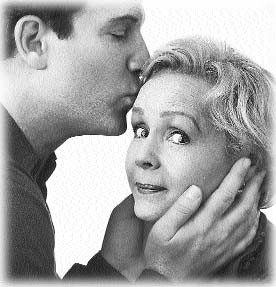 Writer David Templeton takes interesting people to interesting movies in his ongoing quest for the ultimate post-film conversation. This time out, he views the brilliant new comedy Mother, in the company of award-winning author-teacher-mom Molly Giles.

THERE IS A PIVOTAL and much-discussed scene in Albert Brooks’ new psycho-comedic satire Mother, in which a grievously blocked writer (Brooks) discovers that his sharp-witted mom (Debbie Reynolds)–whose chilly disapproval he’s been blaming for all of his problems–was once a promising writer herself.

“Now I know why you hate me,” Brooks crows merrily on screen. “You hate me because you had to give up writing to raise me!” As Reynolds begins her reply (“Well, I wouldn’t have put it that way, but on the whole I’d say yes, that’s true”), I glance over at my guest, writer Molly Giles.

With a deep and audible gasp my companion suddenly stops breathing. She then holds her breath, eyes locked on the screen, as Brooks answers, “From now on I won’t see you as my mother. From now on I’ll see you as what you are–a failure!” Still not breathing, Giles waits as Reynolds reaches up, touches her son’s face, and says, “If that will make you happy, dear.”

Only now does Giles allow herself to breathe again, jubilantly exhaling in a quiet little rush of satisfied approval.

“There is an awful definition of childhood,” Giles tells me a few moments later, taking a seat at a nearby coffeehouse. “Childhood is being locked in a room for years with a woman who hates you.” Noting my mirthful response, she leans closer and whispers, “Not everyone laughs at that, David.”

Giles, an associate professor at San Francisco State University (and, it so happens, the mother of my friend and colleague, Independent associate editor Gretchen Giles), is an acclaimed author and teacher of writers whose luminous first book, Rough Translations (University of Georgia Press, 1984), received much praise and numerous awards, including a nomination for the Pulitzer Prize. Her new collection, Creek Walk and Other Stories (Papier-Mache, 1996), seems destined to a similar fate; written beautifully, with an abundance of irony and a keenness of insight, these 14 stories tell of women in tough situations, zeroing in on the tiny, defining moments that determine their futures. Like Giles’ response to our movie today, I found myself holding my breath as each story came to a close.

“I think that was a very motherly thing to do,” Giles says of Reynolds’ retort to being labeled a failure. “She gives her son back his own sense of autonomy, and he’s able to go out into the world–as big a fool as he ever was. In the end though, this film is far more about two writers than it is about a mother and son.” She rises to get a spoon for her decaf mocha. On returning, she is ready to speak of her own mother.

“She had one book published when she was 30–and she didn’t publish any more. It was titled Cold Heaven, and was a story of a woman who finds her real self while her husband is a way fighting during World War II, and who is expected to be a wife and mother again when he comes back. It was quite an ambitious novel for its time. It had some really interesting questions, questions that later overwhelmed my mother, because she wasn’t able to write and raise a family.

“But she really did want to write,” Giles goes on. “One year she sat down and she wrote 12 short stories, one a month. She’d given herself that assignment, and she would lock us out of the house with sandwiches while she worked. All 12 stories came back rejected on the same day. I remember coming home from school one day, and she was sitting in our driveway with these manila envelopes scattered all around her.”

I ask Giles if she and her mother had ever experienced any of the writer-to-writer jealousy so deftly enacted in Brooks’ film?

“I think my mother was proud of me, as I am of my children,” she shrugs, noting that her own first book was released just a few days before her mother died. “The first story I ever had published had my mother in it,” she smiles. “It ran in Playgirl. My story was sandwiched in between ads for stay-hard cream, so I had to cut it out column by column. Then I held my breath after showing it to my mother–because I’d killed her off in it. She never recognized herself, though.”

As we finish our coffee, Giles suddenly laughs and says, “I know that my daughter is going to write a killer novel about me someday. I only hope it’s after I’m gone.

From the February 6-12, 1997 issue of the Sonoma County Independent

July 1: The Melodians at Mystic Theatre