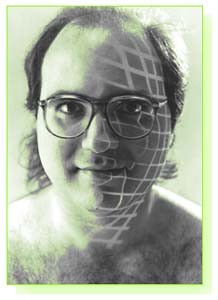 A severely blond Kenneth Branagh, in the role of , has just uttered his fiery proclamation that all his thoughts will henceforth be bloody ones. The camera pans back, the music swells, and the word Intermission float up onto the screen. Moments later, the lobby is raucously packed with people, many forming into loose-knit clusters to murmur and debate with unreserved intensity.

Josh Kornbluth, calmly munching on a bagel, is moving beelike from group to group, sampling the various verbal nectars before moving on to the next cluster. A common topic is the epic four-hour length of the film, a measure that is due to director Branagh’s decision to edit not a single line from Shakespeare’s original text.

When word is given that the film is about to resume, Kornbluth returns to his seat, commenting, “I don’t know. I’ve sat through plenty of 90-minute films that seemed a whole lot longer.”

Hamlet, lush and entertaining, energetically performed by such watchable performers as Derek Jacobi, Charlton Heston, Julie Christie, Robin Williams, and Kate Winslett, is remarkable in spite of its prodigious length. In fact, the inclusion of lines and scenes that have been excised from previous film versions only illuminate the Bard’s mastery at plot and characterization, while never diminishing his knack for thick, showy monologues.

Kornbluth, though he might blush to be compared with Shakespeare, is himself a master of the insightful single-person oratory. His sly, smart, gleefully autobiographical one-man shows have thrust this mild-mannered son of New York communists into a luminous class of performers that includes Spalding Gray, Lily Tomlin, and Eric Bogosian. His remarkable work has now been published in book form. Red Diaper Baby: 3 Comic Monologues by Josh Kornbluth (Mercury House, 1996) is wise and funny, full of language-loving riffs on human nature that demand–much like Shakespeare, only far, far different–to be read joyously aloud.

“It’s really sort of cool to hear all of the lines spoken,” Kornbluth gushes, sipping a cup of coffee after the show. “That it wasn’t reduced to those few things that have become our little cliché friends–the ‘To be or not to be’ scene, and all the different speeches we know so well–is very exciting.

He stares down at his coffee for a moment.

“I think the lives we live today, as we live them, are not generally represented in the commercial visual media with anywhere near the complexity or the richness that our experiences deserve,” he finally remarks. “But Shakespeare does that. He has an amazing grasp of the complexity of human nature. Hamlet is good, but he’s also bad. Everyone is complex.

“But in mainstream stuff,” Kornbluth goes on, shaking his head, “Obi Wan Kenobi is good and Darth Vader is evil, and that’s as complex as it gets. It’s like a binary system. It’s zero and one.

“But in Shakespeare, there are all the possible numbers. We are 0.000111, or we’re 0.001222. You know? We’re the square root of minus one! Within the human character, all numerical values are possible.

“What most movies and plays do, though, is to say the opposite. Zero and one. They say, ‘The things that you feel about yourself, the contradictions that come to you as you are falling asleep, the contradictions you see in other peoples lives, the paradoxes that cannot be reconciled–forget about those! Those are fruity phantasms. You should simply understand that you are either zero or one. You’re a superstar or you’re nobody. You are a success or a failure. You’re evil or good. You’re either a fine upstanding parent or a bad parent.’

“But why not both in conflict with each other?” Kornbluth demands. “Hamlet is all about how we are both. At least, I think that’s what it’s about. What do I know?” He laughs again, throws back the last swallow of coffee, and concludes thusly.

A web exclusive to the February 13-19, 1997 issue of the Sonoma County Independent