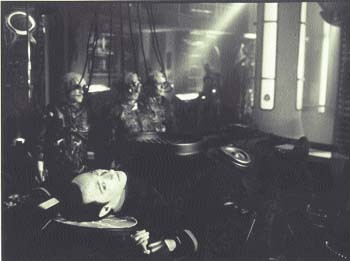 Writer David Templeton takes interesting people to interesting movies in his ongoing quest for the ultimate post-film conversation. This time out, he boldly goes to the latest Star Trek spectacular, along with the technologically savvy author and FX specialist Mark Cotta Vaz.

WE HAVE ARRIVED early at the mall and are standing around in front of the massive 15-screen theater where is playing on four separate screens. Informed that the box office will not open for another 10 minutes, we wander about the mall as custodians install giant Christmas decorations.

Pointing toward “Santa’s Magical Village,” I inform my guest, Mark Vaz, author of the splendid new book Industrial Light and Magic: Into the Digital Realm (Ballantine; $80), that at this particular mall the Jolly Old Elf does not give candy canes to the wide-eyed children sitting on his lap. He hands them a sample bag of breakfast cereals and a book of coupons.

“That’s the creepiest thing I’ve ever heard,” Vaz responds. “I guess you’re never too young to be indoctrinated into the consumer culture, but that’s so aggressive it’s almost repugnant.”

Vaz has devoted the majority of his writerly efforts to the subject of popular culture and film, and to cinematic special effects specifically. He has contributed numerous pieces to the high-tech journal Cinefex and authored books on the history of Batman and on the phenomenon of trance channeling, and an earlier book on the films of George Lucas. In his latest work, co-authored with Patricia Duignan, Vaz has assembled an all-encompassing history of the North Bay­based ILM, nicely illuminating the creative wizardry of the world’s predominant special-effects company. Included, incidentally, are details on the effects from the previous Star Trek films.

First Contact, the first Trek film to feature none of the original cast, presents instead the members of the popular Next Generation TV series. It’s a rousing adventure, with the crew battling the Borg, a frightening swarm of zombielike, cybernetic techno-punks that assimilate everything in their path and have set their sights on Earth. A subplot involves our planet’s “first contact” with aliens, an event that, in Star Trek lore, becomes the catalyst for humanity’s evolution toward peace and prosperity.

“The Borg,” Vaz laughs, sipping a pint of ale after the film. “I got the impression that they’re sort of a comment on our modern mass culture. Maybe the Borg are representative of what we feel is this impersonal culture that surrounds us–the government or the force of overpopulation. We tend to feel depersonalized by our culture, don’t we?”

Individuality versus the needs of the collective whole. This is a recurring theme in the Star Trek ideology. In this latest film, humans existing on the planet just before the extraterrestrials land are individual to a fault.

“I felt sorry for the aliens at the end,” Vaz commiserates. “Being subjected to our lousy whiskey and loud rock and roll.” When I counter that the visitors seemed willing enough to slam back a second shot of booze, Vaz bursts out laughing. “And there’s something odd about that,” he says. “We can say, ‘Oh, these aliens are just like us. They can relate. But why can’t we relate to them? Why can’t we sit and be quiet like they were doing?

“But this movie was made by humans, trained in a human viewpoint. Our culture is very loud and brash and profane. It doesn’t embrace subtlety, at least it hasn’t recently. The nature of mass media is to get out there and to catch your attention, to be loud and boisterous. To act like everyone else.

“On the whole, with marketing and commercial tie-ins and cereal samples from Santa Claus and everything, we’ve already become the Borg! ‘Oh, I’m sorry–I can’t wear those jeans. It would be uncool,'” he mocks.

He takes another sip.

“Maybe the Borg are behind all this,” Vaz laughs. “Maybe if you get Donald Trump and all these people and you pull their face off, it will reveal a bunch of Borgs.

“Back to the issue of aliens making contact, I doubt we’d share our whiskey. I think you’d see abysmal behavior on the part of the human race.

“Even me,” he grimaces. “Just the other day in my house I killed a tarantula. Somehow it got into my house, and it was so creepy I had to kill it. And I’m the kind of guy who lets spiders have their little nests in my place. But all of a sudden this tarantula crawled by–so I dropped a stack of books on it.

“That’s the classic invasion scenario, isn’t it?” he asks. “The aliens come–they look terrifying–so we blast ’em!” He smiles, adding, “And the noble humans live long and prosper.”

From the December 5-11, 1996 issue of the Sonoma Independent