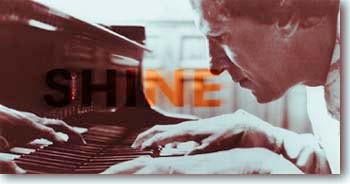 Writer David Templeton takes interesting people to interesting movies in hisongoing quest for the ultimate post-film conversation. This time out, hemeets up with esteemed pianist/conductor Jeffrey Kahane of the Santa RosaSymphony to discuss the musically savvy, critically acclaimed filmShine.

RENOWNED MUSICIAN Jeffrey Kahane is a man so desperately busy that he has notbeen out to a movie theater in days, weeks, months. Furthermore, I ampolitely informed, he probably won’t make it to a movie anytime soon.

Though intrigued by my offer to see the brilliant new film –thestory of Australian pianist David Helfgott and his roller-coasterrelationship with sanity and Rachmaninoff’s Third Piano Concerto–andadmittedly eager to see it, Kahane has expressed concerns that he would notbe able to find the spare time to go off to a show.

Fortunately, a conveniently released videocassette of the film (intended forhomebound Oscar voters; Shine is still in its initial theatricalrelease) has made its way into my timely possession, and I quickly arrange todrop the film off for Mr. Kahane’s private viewing.

“All right. I may have a moment after midnight,” he says.

The hard-working pianist and former rock musician is currently holding a postas conductor of the award-winning Santa Rosa Symphony, a choice job that hesandwiches between numerous recording projects and international tours. Lastyear, Kahane saw the release of Made in America (Sony Records), apassionate assemblage of works by Gershwin and Leonard Bernstein, on which hecollaborated with acclaimed violinist Yo Yo Ma, whom he met while playingwith the Gardner Chamber Orchestra in Boston. The duo frequently worktogether, as in last year’s successful tour of South America.

“I hope you like your coffee somewhat strong,” Kahane warns. A man ofboundless natural energy, he nevertheless clearly enjoys the extra punch of agood cup of joe; this stuff is explosive.

Of course, he was up pretty late.

“There is an extraordinary sequence in the film,” Kahane says, setting hiscup on a blank music sheet, “where the young David Helfgott performsRachmaninoff’s Third Concerto for the first time. All of a sudden–he can’thear the music, we can’t hear the music, but he’s playing. We hear thepounding of his fingers on the keys, the pounding of his heart, and when wedo hear the music, it sometimes seems out of phase with his playing.

“This really happens,” Kahane says earnestly. “Most performers experiencesomething like this at one time or another. It’s very difficult to explain.I’ve certainly had that experience–though not to the severity that Daviddoes.”

At the end of that sequence, Helfgott, soaked in sweat, finishes the concertoand promptly passes out. He is next shown receiving shock therapy in anasylum. The implication is that his attempt to master Rachmaninoff’s ThirdPiano Concerto–nicknamed “Rach 3”–has been so traumatic that it pushes thealready unstable young man over the edge. Indeed, the piece is considered oneof the most difficult works in classical music, with some pages nearly blackwith notes. The remainder of the film details the adult Helfgott’s ultimateredemption, as he rises out of a schizophrenic fog and finds his way back tomusic. The real David Helfgott could not resist returning to the Rach 3,either. His CD recording of the piece is now considered the definitiveperformance of the work.

“I love the Rachmaninoff Third,” Kahane says. “It’s a piece I’ve played alot. For me, as it is for most aspiring pianists, it’s something you have todo. Once you’ve accomplished that, it’s like climbing a greatmountain–you’ve really done something.”

And is it the kind of piece that could drive one to madness?

“Oh yes,” he affirms mildly. “It could put you right over the edge. Manypianists injure themselves, physically, trying to play it. And if you arepsychologically vulnerable, as David was–yes, I believe it could do that toyou.” Kahane himself learned the piece when he was 22, but did not perform itpublicly for several years. He has performed it frequently since.

“What I love about the movie, ultimately, is its depiction of the redemptivepower of music,” Kahane continues. “I’ve devoted myself so much to the ideathat music does have that kind of power. David was saved by the powerof music, and the power of love, of course, with the love of his wife, whosaw who David was even though everyone around him just saw a nut case.”

Asked to verify a rumor that Rachmaninoff had tremendously large hands,Kahane laughs.

“That’s true, that’s what they say,” he says. “He could reach an octave and afifth! Way beyond the reach of most pianists.”

Holding up his own hands, spreading his fingers to demonstrate his reach,Kahane adds, “My hands, however, are definitely on the smaller end of thespectrum. Interestingly, though, Rachmaninoff’s work can be played with avery small hand, unlike that of other composers: Brahms, Liszt, Bartok. Ican play Rachmaninoff, and I am eternally grateful to him for making thatpossible.

“My life,” he smiles, “has certainly been the richer for it.”