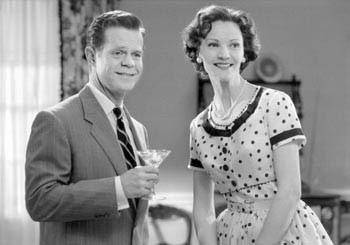 Glory days: William Macy and Joan Allen get ready for revolution in Pleasantville.

Writer David Templeton takes interesting people to interesting movies in his ongoing quest for the ultimate post-film conversation. This time out, he takes a stroll through Pleasantville with best-selling Southern author Clyde Edgerton.

IT’S A LONG WAY from North Carolina to San Francisco, and Clyde Edgerton–appearing now at the front door of a massive downtown cineplex–looks as if he’s walked the whole way on foot. His eyes are remarkably red, his unshaven, smiling face broadcasts the effort of every stifled yawn. He’s in California for a string of bookstore readings–his 1997 best-selling novel Where Trouble Sleeps has just been released in paperback–and he’s graciously agreed to go to the movies before his first appearance. Even so, I’m feeling more than a little guilty, fearing that Edgerton might be happier back at his hotel–you know, taking a nice long nap.

“Oh, I’m all right,” he says in a warm drawl, suppressing another yawn. “I may end up fallin’ asleep during the movie–but hell, if you don’t mind, I don’t mind.”

I don’t mind. And for the record, Edgerton doesn’t fall asleep.

In fact, Pleasantville proves to be a stimulating experience. You’ve seen the commercials: Two ’90s teenagers (Reese Witherspoon and Toby Maguire) are transported into the strictly black-and-white world of a ’50s television sitcom, infecting the townsfolk (including Joan Allen and William H. Macy) with a kind of Technicolor virus as the citizens’ private passions are gloriously, sometimes frighteningly, awakened.

By the end of the film, Edgerton has been temporarily energized.

“Though I wanted it to be funnier,” he points out. “It could have been one funny-ass movie.”

Pleasantville is a film about many things, but chiefly it’s a satire on modern conservative attitudes, poking holes in the right-wing’s insistence that America in the ’90s needs an infusion of ’50s values. Certainly, the colorful changes brought to the town of Pleasantville have a dark side–with shades of McCarthyism and racial segregation, erupting into book burning and ugly hate crimes. The filmmakers seem to be saying that, sure, changes can be difficult. But in the end, freedom is always worth the complications that come with it.

Edgerton’s own work explores similar territory. Walking across Egypt (soon to be made into a film itself), Killer Diller, and especially Where Trouble Sleeps, all show the conflict between old ways of thinking and new. In Trouble, a tiny ’50s Southern town–a rundown version of Pleasantville–is forever altered, for good and ill, when a mysterious stranger drives into town with larceny in his heart and a trunk full of dirty movies. The way the town ultimately deals with the stranger, and the mark he leaves behind, is unforgettable.

“We talk about the way the world was in the ’50s and the way it is now,” Edgerton says after the film, as we sit in a nearby diner. “But when we think of the ’50s, we can’t really remember what the ’50s were like. We remember the way the ’50s were in some movie or some TV show or in photographs. Politicians say that the ’50s were such a wonderful time, a time of family values and goodness. That’s true–but it’s also not true.

“In my family, especially on my father’s side of the family, he always worshiped his parents. He and his sisters stayed at home, very close to their parents. In a sense, they gave up their lives; they didn’t look for options or even think about moving away. They just stayed there, almost in a kind of psychological, emotional incest.”

“Which was bad,” I interject.

“Well, it’s good and bad,” he replies. “I think–not only in the South, but in many rural areas, especially agricultural areas, where the family lived and worked in sight of each other, from dawn to dark, every day of the year, year after year–a certain level of harmony had to happen in order to survive.”

EVER READ Robert Bly?” I ask.”Not much,” Edgerton returns. I explain the controversial assertion by the poet/men’s movement leader that one of men’s biggest problems is that we no longer grow up in sight of our fathers, are no longer trained in our father’s trade. “Bly says that a kind of spiritual food was once passed from father to son,” I sum up, “and that isn’t done much today, to the spiritual detriment of all men.”

“Well, that’s fine as long as you don’t have an asshole for a father,” Edgerton tosses back, amiably. “As soon as you have an asshole father you learn asshole ways that you pass on to your asshole son. There were plenty of people living at home and who knew their fathers in the ’50s, and in a lot of cases, because they grew up with their father, and because of that militaristic emotional bonding, they didn’t ever do anything on their own–because of their father.”

He let out a yawn again–a great big one–as I mention a recent Time magazine article. Critical of Pleasantville, the writer argued that the ’50s were far less dark than what followed; we gained sexual and artistic freedom at the cost of drug addiction, AIDS, and teen pregnancy.

“The thing is, when we talk about returning the ’50s–either literally, like in the movie, or figuratively, by regaining some sense of values–you can’t. You can’t do it. We can’t put the toothpaste back in the tube. The differences between today and the ’50s are too great. Like I said, we’ve forgotten what it was really like back then, but it wasn’t Ozzie and Harriet.

“What I’m tryin’ to say is,” he concludes, politely covering one last yawn, “we’ve covered so much ground since the ’50s–ground we don’t even remember covering–that we no longer even recognize how far we’ve come.”

Edgerton nods, smiles, and shrugs all at once: “You bet we have.”