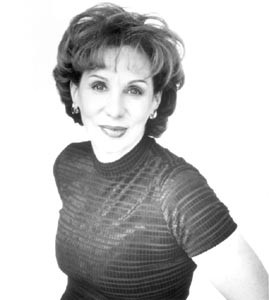 Whizzing on the Wiz

Dr. Joy Brown takes on the ‘Wizard of Oz’

Writer David Templeton takes interesting people to interesting movies in his ongoing quest for the ultimate post-film conversation. This time out, he schedules a session with Dr. Joy Browne, renowned radio psychologist and author, to discuss the imbedded messages in the classic film The Wizard of Oz.

Dr. Joy Browne–while admitting that The Wizard of Oz is a wonderful movie–boldly confesses that it gave her nightmares the first time she saw it. She was three years old at the time.

“It scared me to death,” she allows. To this day, that cackling, green-skinned Wicked Witch still makes the occasional appearance in her dreams.

But that’s not what bugs her about The Wizard of Oz.

The renowned New York-based author and syndicated radio psychologist–heard locally on KSRO–feels professionally obligated to point out a certain downside to the classic tale of Dorothy and her misfit friends on the way to the Emerald city.

“It’s such an odd combination of fantasy and reality,” Browne says. “And some of those fantasies–and the beliefs and ideas at the core of those fantasies–can be dangerous if swallowed whole. And with The Wizard of Oz, we do swallow it whole. We open up and let it dazzle us, and then we take its secret messages deep inside us–and then wonder later on why our lives are so messed up.”

The tome to which she refers is her brand new Nine Fantasies That Will Destroy Your Life–and The Nine Realities That Will Save You (Crown, 1998, $23). Part self-help book, part comedy-routine, this is an immensely readable, reasnoably insightful, occasionally quite challenging look at a number of core beliefs that many of us have based our lives upon; these fantasies include ‘Winning the Lottery Will Free Me, Men and Women are From Different Planets, Good Always Triumphs, Somewhere I Have a Soulmate”–and “There’s No Place Like Home.”

Browne’s debunking of these fantasies is given a practical spin as she makes sympathetic examples of actual phone calls and letters she’s received over the years. Her radio program, now broadcast on over 300 stations around the country, has gained Browne an ardent following–not so ardent, perhaps, as the routine listeners of that other female radio shrink–and has motivated the National Association of Talk Show Hosts to pronounce her the “Best Female Talk Show Host” for the last two years. In person, she is straight-forward and playful; she seems, in fact, to thrive on a certain level of friendly theoretical debate.

As for The Wizard of Oz–currently enjoying a national re-lease, with a spiffy new print and a gussied-up soundtrack–it seems, in Browne’s view, to be laden with unhealthy messages. That No Place Like Home bit is only the jumping off point.

” I suppose,” she laughs, “that instead of calling my book what I did, I could have called it The Wizard of Oz, and How Not To Live It. Look at Dorothy. She’s a lonely orphan who’s best friend is a dog. She can’t get along with the neighbors. She sits around wishing for a place over the rainbow instead of improving her people skills. Think about it, when she’s taken to Oz and her house lands on the witch, she says, ‘It’s not my fault, It’s not my fault.’ She won’t take any responsibility for it. It may not have been intentional, but that doesn’t mean it wasn’t her responsibility. She did, in fact, kill the witch.”

“Well, gee,” I respond, thinking this all seem a wee bit harsh (and perhaps becoming a bit defensive of Wizard, a movie that still moves me to tears after nearly 40 years of faithful viewing), “Why was it Dorothy’s responsibility?”

“Because it was her house,” Browne replies gently, sensing my dismay. “She could have said, ‘Yes I did it. It wasn’t my intent, but she is dead because of my house, and I recognize that I was indirectly involved.’ But Dorothy shows no remorse at all. She just starts yelping, “Hey. It wasn’t me,’ and immediately starts blaming the tornado and everything else–and then she takes the witch’s magic ruby slippers! What was that about?”

“Oh, Dorothy didn’t take the slippers,” I protest. “They were forced on her. They magically appeared on Dorothy’s feet after vanishing from from the shrivelling legs of the dead witch.”

“Yeah right. That’s what we all say,” Browne laughs. “The point is, David, she could have said no, and she didn’t.”

Hmmmn. Well, okay. I can see how–on a very subconscious level–Dorothy’s casual theft of the slippers might set a bad example. But what could possibly be wrong with, say, the Munchkins?

“Aren’t the munchkins a symbol of being in touch with your inner child?” I ask.

“The munchkins are adults who refuse to grow up,” Browne replies. “They were all very cheerful and grotesquely baby-ish. They have that ‘Ignorance is Bliss’ thing going, and let me tell you–ignorance ain’t bliss.” Ignorance is Bliss, by the way, is another of the nine fantasies Browne explores in her book.

“I don’t want to give the impression that The Wizard of Oz is all bad,” she kindly mentions. “There are some great realities in the film, too; the cowardly lion learns that if you face your fears you’re less frightened. The tin man without a heart learns that he doesn’t have to be afraid of crying. The wizard teaches them that everything they’ve been seeking already exists inside themselves. That’s great stuff.

“We are always looking for external solutions to our internal problems,” she continues. “The book is full of these kind of things: ‘Do I have a soul mate?’ or ‘The truth will set me free, or ‘Other people’s families are functional,’ or ‘Everybody else is perfect …’ “

“Exactly,” Browne nods. “So I get to play the wizard here and say, ‘No no no. Use your fantasy, but use it to learn what you feel your lacking, and then go get it. But know that you won’t get it by winning the lottery or by meeting the magical right person for you. You’ll get it through self knowledge. By knowing what you want, you can turn your fantasies into realities. You can, in fact, find the courage you want, you can find the ability to cry, or you can get yourself home.

“But we all still think that there’s something out there, that–once we find it and take it–will make us happy,” she goes on. “And it’s always something outside of us. It’s the magic chalice. The ruby red slippers.”

“It’s going to see the wizard,” I contribute.

“Even so,” I mumble, still feeling that the movie meeds a bit of defending, “Maybe The Wizard of Oz does have a lot of negative messages, unhealthy fantasies that run rampant through the story–but I still treasure it. I love The Wizard of Oz.”

“I have no problem with that,” Dr. Browne replies with a smile. “I’m not against fantasy. I’m against believing in fantasies, when believing in them will hurt us. That’s what I’m saying.

“Go see The Wizard of Oz. See it thirty times. Enjoy it. But don’t make the mistake of thinking you’re life should work that way. Don’t spend your life longing for something ‘over the rainbow.’ Figure out what you want, figure out what you need–and then, go get it. “

Web extra to the November 25-December 2, 1998 issue of the Sonoma County Independent.