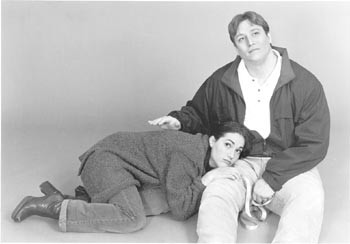 SANTA ROSA’S Summer Repertory Theatre invites local theatergoers to allay the dog days of summer with their own dog show, A. R. Gurney’s canine comedy Sylvia (marvelously directed by Irwin Appel). About a love triangle between a woman, her man, and his dog, this supremely satisfying production comes in on a Gurney but certainly doesn’t leave on a stretcher.

In it, empty-nesters and suburban refugees Greg (Gregory Joseph Allen) and Kate (Carrie Baker) have moved to Manhattan to embrace the latter halves of their lives. Greg’s career and emotional well-being flounder in the new environment, however, as his wife’s career teaching Shakespeare to inner-city kids flourishes. Yearning for emotional connection with the bustling world surrounding him, Greg impulsively adopts a stray mutt named Sylvia (Vanessa Severo).

Sylvia seems to converses with Greg as though she were human, but soon becomes a “bone of contention” between him and his wife. Threats of the pound loom as the dog, described as a “male menopausal moment,” effectively becomes “another woman.”

Vanessa Severo is the kind of actress with whom audiences (and theater reviewers) instantly fall in love. Excruciatingly beautiful (or should that be fetching?), the winsome actress bounds onstage as the breathless and blathering Labrador-poodle mix Sylvia, and the house nearly caves in from laughter and adoration.

Severo’s performance is vivacious, kinetic, and poignant–her parody of puppydom is as effortless as her wit is surefire. Beyond the exquisite emotional shading Severo brings to her canine character, the actress proves herself an adept physical comedienne. After being groomed with bows and a boa, she prances about the living-room set with her ass and nose so far in the air they’re practically airborne.

Greg Allen, as a commodities trader gone astray, provides the perfect ballast for Sylvia’s spitfire antics. More than delivering a lovable lug hung up on his pooch, Allen develops Greg’s arc such that it both sells the absurdity of his constant lovelorn doggerel (“Ahh, who’s a good girl?”) and draws a memorable portrait of a man on a fox hunt for happiness.

Throughout, Carrie Baker’s Kate, an upright, cosmopolitan schoolmarm with a penchant for quoting the bard , serves as the play’s voice of reason. Baker brings a cool sophistication and attractive mien to her exasperated character, who’s forced to choose between obliging her husband’s bestial obsessions and going solo.

Heidi Tokheim proves herself the chameleon of this stellar cast by appearing as different sounding boards for Greg and Kate. Among them are Tom, a Central Park regular whose dog Bowser is the object of Sylvia’s desire prior to her getting spayed and Leslie, the sexually ambiguous marriage counselor who explores gender issues in his/her spare time.

No bones about it: SRT’s Sylvia is more than a shaggy-dog story. It’s inspired, moving theater. Not to sound dogmatic, but audiences should sit and watch this show or have their noses rubbed in regret.