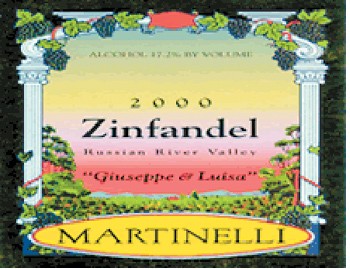 Lowdown: It’s all an elaborate ruse, you see. The big red barn, the sign hawking apples, the deftly placed jars of jams and jellies that keep the riffraff from making their way to the tasting bar. . . . Oh yes, we’re on to you, Martinelli. Just like everyone else who isn’t toting around a Parker’s Wine Guide, we blew past the River Road barn for months, assuming it was part of the Martinelli apple empire–you know, the sparkling apple juice you buy for the kids at holidays? How wrong we were.

Vibe: Actually, there’s no relation between the Sonoma Martinellis and the apple-juice Martinellis, aside from the name. The local clan has been farming in Sonoma since the late 1800s, when old grandpappy Giuseppe came over from Lucca, Italy. It wasn’t until the 1980s, however, that the family got the idea to start bottling their own grapes and make wine–pretty good wine, but not great wine. A few years ago, the family hired winemaking legend Helen Turley (once called “the Goddess of Wine”) to consult, giving her free reign over the winemaking process. Lo and behold, the wines got a whole lot better–as in “Robert Parker, the dean of wines, personally visits here once a year” better. The funny thing is that no one seems to get very torqued up about the whole thing. They still have the red barn, the squeaky wooden floors, the “how ya doin’?” attitude going on while quietly churning out some of the best wines in the state.

Mouth value: Guess what? Gewürztraminer doesn’t have to make your teeth hurt. The 2001 is an off-dry–meaning not very sweet–and leaves a yummy lingering apricot and peach flavor. The 2000 Reserve Pinot Noir is a powerhouse from 25-year-old vines further inland, while the 2001 Bondi Home Ranch Pinot Noir has a more elegant Burgundian quality. The best bet, however, is the 2001 Giuseppe and Luisa Zinfandel, with its super spicy, super zesty, super-high alcohol (15.3 percent compared to an average 11-13 percent) one-two-three knockout punch.

Five-second snob: The jewel in the Martinelli crown is its Zinfandel–most notably, the Jackass Hill Zin, which is nearly impossible to come by. Only about 500 cases are made from grapes grown on a 60-degree incline. Understandably, the steep slope makes for some challenging harvesting of the more than 100-year-old vines. A hill only a jackass would farm, according to one of the Martinelli ancestors.