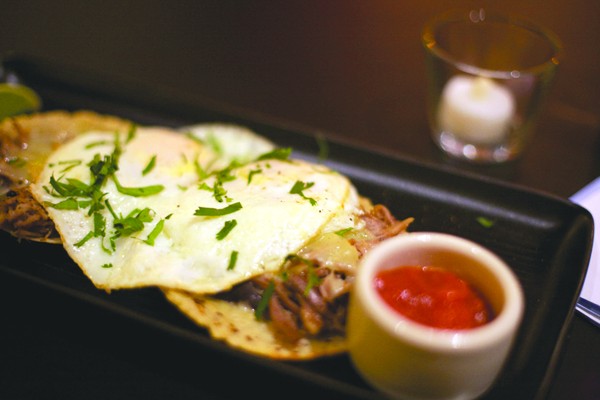 Sometimes it’s all about the atmosphere. Walking into the Sweetwater Music Hall for Sunday Brunch, one might expect a morning-after disarray of crumpled set lists, stray empty beer bottles and a lingering aroma of sweat from the show the night before. Turns out the place cleans up well, especially on Sundays, when there are fresh flowers along the bar, a nice array of tables and nary a broken highball glass in sight for the Sweetwater Cafe’s brunch. The only remnant from the weekend’s rousing nightlife, actually, is a large Anvil equipment case spraypainted with a “RATDOG” stencil and covered in stickers, the most prominent of which reads “Make Bobby Shave.” Onstage, a jazz duo plays “Star Eyes” while small children frolic about the room, and soon, they’re joined by vocalist Audrey Shimkas, who delivers cool, breezy classics—”Bye Bye Blackbird, “How About You,” “Summer Samba”—as reliable as the 100-year-old exposed rafters.

But sometimes it’s all about the food, too. Everything on the Sweetwater menu is fresh, and it shows, even in a dish as simple as huevos rancheros, made with tortillas more robust than any I’ve had. A recent menu included goat cheese blintzes with artichoke and preserved lemon ($9.75), a smoked salmon plate with crostini ($10.50) and duck hash with poached eggs ($12.25) alongside staples like brown butter and almond French toast ($8.75) and omelettes with shaved asparagus ($9.50). But don’t hold me to those options. the menu changes constantly, according to seasonal availability and what looks good at the farmers market. All of it thus far has been stellar.

The Sweetwater Cafe is open seven days a week for breakfast and lunch, Monday–Friday; brunch, Saturday–Sunday; and dinner “usually” from 4–10pm (check ahead of time). For the jazz brunch on Sunday, remember to bring quarters to Mill Valley, the city that charges for parking on Sundays.