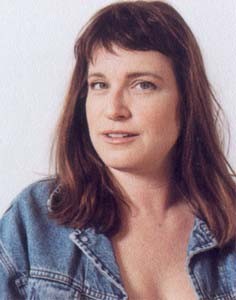 Susie Bright’s new book brings sex out of the closet

But recounting right-wing wet dreams in public is only the beginning for Bright. The Quayle experience, one of many anecdotes that she relates in her new book, Full Exposure (HarperSanFrancisco; $22), is a personal application of the prescription for candor that the sexpert-at-large wants to write for us all. Bright (whose previous books include The Sexual State of the Union) is willing to take her own medicine, and she thinks it’s time the rest of America opened its bulging closets and let long-hidden truths about sex get a nice suntan.

Titillation is the American standard: first offer a peek, then slap the hand that seeks to touch.”

In Full Exposure, Bright employs her usual conversational writing style, packed with offhand quips and casual irony. That breezy tone, combined with the book’s brevity, masks the serious goal of this 163-page volume. Bright has long defended freedom of sexual expression against all comers, from the puritanical right to the sexaphobic left. This old rogues’ gallery is given a dutiful slap on the wrist in Full Exposure, but the main villain this time out is the commodification of sex.

That might sound strange coming from a woman who began her career selling vibrators and has gone on to edit well-marketed collections of erotica, but Bright is fully aware of the ambiguities surrounding current attitudes. She’s delighted that people today feel free to write, read, and talk about sex. She’s less happy that they do it all in the language of a Madison Avenue marketing profile–what she calls the ethos of “My sexual preference is my lifestyle is my politics is my record label.”

And that may be the most heartening thing about Susie Bright. Rigid categories of all kinds–whether from the world of advertising or book publishing–come to grief at the hands of her sharp wit and irrepressible individualism. In a world that seems more standardized by the minute, it’s nice to be able to count on someone for a rational dose of old-fashioned chaos.