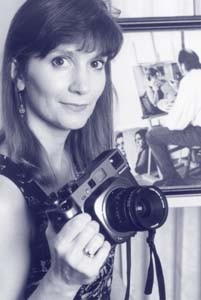 Local photogs take a shot at exposure with Camera Art 1

PHOTOGRAPHER Kathleen McCallum is up against a brick wall, camera in hand, patiently doing exactly as she’s told. “Move your head a little to the left. There. That’s good. Raise your arm slightly like . . . that. Excellent. Good. OK. Hold still. Great.”

“I don’t mind it,” she says after the snap glare fades. “It’s fun to be outside.”

But McCallum is inside her Santa Rosa studio. What she is outside of is the squint-range of the viewfinder, this time as the subject, not the photographer. As for the shooter, he has no interest in a modeling job.

“I don’t care for it,” he says, packing up his lamps and cameras and departing out the studio door with such haste as to suggest a fear that someone might force him to don a toga and laurel crown for posterity.

“I used to photograph myself a lot in college,” McCallum explains, “because I was my own most accessible model.”

The walls of her basement studio suggest that her luck in finding models has dramatically improved. So, too, have her ambitions.

Owner of the Emotionography photography business, McCallum is working to improve the careers of more than 50 Sonoma County photographers. A former labor organizer, this 41-year-old mother of two small children is now turning her considerable energy to mounting a two-day outdoor festival of photography. Titled “Camera Art 1,” this collective of local talent converges upon Santa Rosa’s Montgomery Village on Sept. 25-26.

“I do have a passion for making things happen,” she says. “I think that change is a good thing, and we obviously have to have it.”

And to hear McCallum plan, two days of the best imagery the county has to offer is only the beginning: “I would like to see some type of permanent venue,” she allows. “Perhaps with sculpture, photography, and furniture art, so that the walls could be devoted to the photos.” She’s got her sights set on establishing a permanent cooperative, possibly in the burgeoning Railroad Square area.

A muffled “Hello!” rings out from McCallum’s upstairs home. Polaroid-emulsion transfer artist Kathleen Thormod Carr has evidently been up there for some time looking for McCallum, admiring the representative works on her walls, resisting the cakes laid out on the living room table, and presumably not rifling through the bathroom cabinets.

Carr makes her way into the studio. “I’m always interested in helping to put photography on the map as a collectible art form and garnering more exposure,” she says, settling herself on the couch. “I’m delighted that [the Barry Singer Gallery] has opened in Petaluma, but in terms of venues for photography in the west county and Santa Rosa–well, there really aren’t any.”

While both artists agree that the occasional photography exhibit at such places as SMOVA and the Soundscape Gallery are clicks in the right direction, both are convinced of the need for an ongoing space. “I think that we need a venue now. Our time is here and everyone is ready,” says McCallum.

Many visions: McCallum’s own Gentle Spirit is one of a wide variety of photos that will be on display at the upcoming Camera Art 1 exhibit.

LIKE MANY good ideas, this one began with a party. During the dreariest stint of last spring’s rainy period, McCallum invited some 40 photographers to gather at a local pub, each bringing a representative sample of work. Ranging along the walls were shots by former Rolling Stone magazine photographer Baron Wolman, acclaimed photographer Sherburn Sanborn, and fantasist Ralph Chubb–who builds elaborate Maxfield Parrish-like sets before photographing his models cavorting in dreamy deco fashion.

Post-party word of mouth and flyers strategically placed at local supply stores swelled the number of applicants to over 60. Unwilling to jury the show, McCallum instead strove for balance, selecting among a wide range of subjects and styles.

“We couldn’t have everyone doing landscapes,” she explains with a laugh.

While the natural beauty of our county is abundantly represented, McCallum’s vision settles mostly on humans. Calling herself a “romantic realist” who also captures the “social landscape,” she documents both the ordinary and the fantastic. A black-and-white image of a gloriously fecund pregnant model is displayed down the wall of McCallum’s home from a creamy documentary shot of a Mexican villager.

“With rare exception, I photograph only people, and that’s because of the emotional content,” she says, adding that she is working toward a master’s degree in art therapy at Sonoma State University. “I look for emotion and interaction with people.”

CARR, on the other hand, uses the Polaroid-emulsion technique to fool with what she terms “the land of happy accidents”–those moments when the images mutate seemingly on their own, leading her willingly behind them. An artist with two well-regarded books in print who has placed her commercial work in many national magazines, Carr attains such a painterly quality with her emulsion transfers that one is compelled to ask why she doesn’t just start with brush and canvas.

“That’s one of the reasons that I started hand-coloring my black-and-white prints,” she explains. “I wanted to express my subjective feelings more than a straight photograph sometimes does. There’s something about the blank canvas and starting with nothing . . . Some people are really good at working with what’s there and composing and arranging that and creating from that–and that’s what I do best.”

With the swath of vision represented for “Camera Art 1” ranging from crystal microscope revelations to rock-star faces to the rounded curve of a tattooed back, to the lightweightedness of synchronized pregnant swimmers, to the daily domesticity of life on the farm, McCallum feels that she is organizing more than just an art fair.

“I think that as artists we have a responsibility to promote art, because it’s disappearing from the school systems,” she says. “Whether it’s our own or someone else’s, we need to keep it a vital part of the community.”