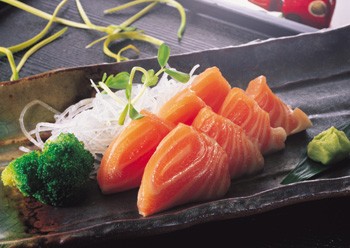 Oh, the humanity! Little boats are crashing everywhere. The Lilliputian canal before us is clogged with wreckage and no one is getting fed. With a flick of his steel blade–shwing-thump!–the chef frees the jammed ship keeled perilously close to losing its fishy load. With a gentle thrust forward, the little sushi boats are freed to continue their journey round and round and round the bar. And not a moment too soon: it’s nearly 10pm and we’re starving.

Bellying up to the mini waterway, we’re ready to start plucking nigiri from the wee boats floating by. Tiny lacquered ships circle with enticing loads of California rolls and sushi. Who knows what wonders will bob by or what romance will blossom as I nuzzle my bleary-eyed partner gingerly plucking a shrimp from a passing boat.

Though unassuming from outside, the recently opened Boathouse Sushi Japanese Bistro in Rohnert Park is beautifully appointed on the inside with large windows, a comfortable boatside sushi bar that allows patrons to enjoy à la carte sushi and an open kitchen. Boasting a hip, techno-modern pan-Asian fusion décor that’s rare north of Marin, the focus here is the massive waterway sushi bar that floats 10 to 12 tiny boats carrying different colored plates. Sitting at the bar, you can pluck various rolls and nigiri that range in price from about $3.25 to $5. Stack the plates, and your server calculates the cost.

As we enter, our host snaps to attention. We’re impressed with his affability this late. In the corner, waiters and staff are quietly discussing the canal’s obvious flow-control issues with concern. The two young sushi chefs gabbing behind the bar fail to welcome us, or even notice us, a nicety we’ve become accustomed to in our favorite sushi haunts. Though plenty of boats float by, we’re disappointed that there are only about three or four kinds of sushi onboard: California rolls, salmon salad, cucumber rolls. Not much to choose from once we’ve grabbed a couple plates.

But it’s late, nearly closing time, so we overlook the lack of selection and end-of-the-night malaise. Drink time: we order up two mango mojitos, a blend of mango, mojito mix (according to our server) and Soju sake. The presentation wows, but we’re left wondering where the booze was. While heavy on the mango, the drink is light on the sake for our $7. We remain optimistic, however.

After munching a few floating nibbles, we order the Tofu Titanic ($9.25) and Boathouse roll ($15) along with several nigiri (à la carte sushi pieces). Again, the presentation wows. The Titanic’s tofu is crispy and light with a martini glass of teriyaki sauce and a refreshing cucumber salad on the side. The Boathouse roll is filled with tuna, salmon, yellowtail, avocado, cucumber and tobiko (the orange roe of flying fish).

Maybe we’re full from all the nigiri, but this is almost too much to eat. The roll is overstuffed with rice and has too much filling inside to really pick out the unique flavors of the fish. It’s also too difficult to maneuver gracefully in one bite, a major flaw when eating sushi. The plate is garnished with swizzles of a spicy beet-colored sauce that make for interesting dipping, however.

The best bet at Boathouse Sushi is the combination lunch special. Several days later, the canal’s waterway issues seem to be resolved, and boats are speeding by with a wider variety of nigiri, including eel rolls, California rolls, salmon salad and tamago (seasoned egg). You’ll rarely find really outlandish stuff floating by, but it’s fun to grab a plate or two while you’re waiting for the main course. The chefs can also make up special-order hand rolls and sashimi if you ask.

We tried the calamari frits ($8.75), a combination lunch that included steamed rice, miso soup, sumonomo salad and a California roll. Other combination lunches include tempura, grilled salmon, teriyaki chicken and steak. The frits we ordered were described as breaded calamari steak strips with a Thai aioli sauce. They were surprisingly crisp; in fact, there was no bounce or chew to the calamari at all, which was a little disappointing. The taste was more breading than calamari, though the spicy aioli added a tangy kick.

A minor but noted flaw was that the miso soup tasted extraordinarily bland and watery. Miso is the perfect palate preparation for the salty, savory meal ahead. Done well, it is smoky, briny and even a little creamy when the miso mixes together in the bowl. When it’s good, its great. When it’s bad, well–it just sets a bad tone for the rest of the meal.

Also just opened is Sushi Tozai, which gets rice-covered thumbs up for the area’s best new sushi. The interior is small but immaculate, with neat little individual place settings that include a moist scented towel for cleaning up before the meal, a simple, but very Japanese, touch.

We loved sitting at the bar and watching the chefs work. We were greeted politely and our orders were taken by the lunch sushi chef–a woman–with a courteous “Hai!” each time. We skipped over the tempura and boxed lunches (teriyaki, katsu and tempura) in favor of maki (rolls) and nigiri (rice and raw fish). The standout winners we tasted were the maguro nigiri (tuna, $4.25), poki (ahi tuna with tobiko, $5) and the Rock and Roll ($5), a roll made with barbequed eel. All were perfectly sized and shaped. The eel was toasty and warm with sweet teriyaki sauce rolled inside. The nigiri was expertly presented and insanely fresh.

The Carburetor Roll ($11.50), a shrimp tempura roll with snow crab and avocado, was worth an extra trip. The crispiness of the tempura balanced perfectly with the flaked crab and thinly sliced avocado. The pieces were bite-sized and packed with flavor.

Tozai, though it had only been open for a week by our visit, was already packed with lunch-time diners in its somewhat hidden spot near the bakery. The restaurant offers a banquet room and takeout.

When you’re buying sushi at 7-11 (yep, you can on Santa Rosa Avenue), it’s time to admit you’ve got a problem. Save the money, not to mention the risk of some serious possible gastrointestinal issues, by making it at home. Most sushi supplies are available in the Asian aisle of any grocer. However, there are a few tricks of the trade:

* Make sure to buy toasted nori (seaweed) to get the best flavor. Otherwise, you’ll need to toast it yourself over a gas flame, and that’s just way too much trouble.

* Buy short-grain sushi rice. Using Uncle Ben’s or any other long-grain rice won’t work. Season the rice with a little rice wine vinegar and make sure to let it cool to room temperature.

* Though it goes against all food-handling techniques you learned in school, you can eat raw fish at home. Make sure to buy sushi-grade fish (this is the freshest) from a very reputable fish monger. Our favorite fish comes from the Santa Rosa farmers market, where they’ll tell you the pedigree of the fish along with when it was cut (or you can watch them cut it themselves). Keep it nice and cold and make sure to use it within a day or two.

* For rolls, get a sturdy bamboo sushi mat and wrap in plastic wrap before rolling (to keep things sanitary).