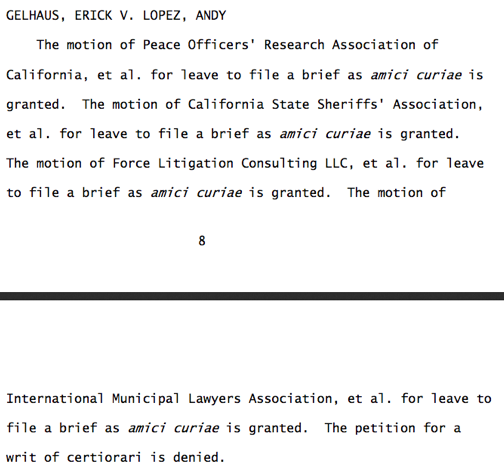 The Supreme Court this morning denied a petition that asked for a writ of certiorari from the high court to set aside a lower court ruling regarding the actions of Sonoma County Sheriff’s Office (SCSO) officer Erick Gelhaus. The police sergeant was involved in a 2013 shooting of a teenager carrying a replica AK-47 in Santa Rosa while he was a deputy on patrol in Moorland. The court’s ruling appears to indicate that the last of Sonoma County’s legal options may have been exhausted and it will either have to settle with the family of Andy Lopez in an ongoing federal civil-rights lawsuit, or participate in a trial to determine whether Gelhaus should be granted qualified immunity for his role in the incident. The county has now lost in pleadings before the U.S. District Court, the 9th Circuit Court of Appeals, and now, the Supreme Court. It’s a big blow to the county, and SCSO, given that court-watchers were increasingly convinced in recent days that the conservative court would rebuke the 9th Circuit’s ruling that there were use-of-force issues in the case that ought to be sorted out out by a jury. Here’s the ruling: