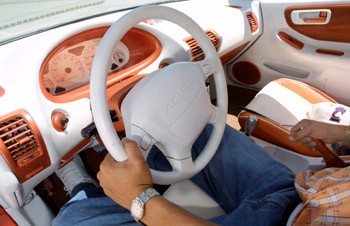 Age-old problem of street racing gets a new look

THIS IS NOT your father’s Oldsmobile. This is a sporty Toyota Supra modified with a sequential, twin-turbocharged 3.0L DOHC 24-valve EFI inline-six, an air-to-air intercooler with 720cc injectors, and a titanium cat-back exhaust.

If it had wings, it would go to the moon.

Known as “sport-compact cars” or simply “imports,” these souped-up-beyond-recognition Japanese economy cars form the basis of a fast-growing subculture in which thrill-seeking youths one-up one another with the speed and style of their “rides.” The import street-racing trend is a new, high-tech, and multicultural incarnation of America’s age-old obsession with the automobile, an eternal problem of young people pushing the throttle of their newfound independence.

At the tender age of 18, Scott already has the dubious distinction of having sped into a 360-degree spin at Santa Rosa’s Fourth and Mendo at 3 a.m.–right in front of a pack of cops. They shined a bright light in his face and gave him the Kafka treatment for four hours (at least he knew what he’d done). Scott’s thin frame supports a shaved head, dual earrings, and facial hair that doesn’t grow in evenly yet. He’s also rolled two cars. His friend Stacy (not her real name), 22, has raced her Acura Integra on the streets of Rohnert Park and says there’s a rapidly growing number of girls in the local import-racing scene.

They recount the tale of an exhaust-filled night this summer: 400 cars gathered on a Sonoma County street for some high-octane jousting. Street races, like the oldest-established, permanent floating crap game in Guys and Dolls, tend to be at different spots that are revealed only at the last moment, spread by cell-phone word of mouth. Scott has spoken to the law many times about street racing. Once, he says, a CHP officer was happy to turn the other cheek. “A lot of cops I’ve talked to say they don’t care if we race, as long as everyone’s safe about it and it’s a country road where there’s no traffic,” Scott says.

While street races ending in fatalities can make national news (in a well-publicized case recently, a Lamborghini and Corvette collided with another vehicle while racing down an East Coast street, killing three; another recent collision killed a Fremont mother who happened to drive head-on into a racer), those inside the scene say accidents are rare and most are caused by pedestrian revelers getting in the way of the cars. And today’s import fanatics are mostly interested in cultivating a cool, edgy image, not in automobile performance, contends Miles Hechtman, 23, of tuning and logo shop Epic Images in Santa Rosa. The former Southern California native says he grew up in the scene, which he traces to the Asian community in Long Beach about a decade ago. “High school punks today are doing it for the image,” says Hechtman. “Before, it was about the cars; now it’s like what jeans you’re wearing.”

JAPANESE compact cars are an obvious choice for young racers. They’re reliable, relatively inexpensive, and incredibly easy to modify. Honda Civics and Mitsubishi Eclipses are popular project cars. With a little turbocharging and “chipping” (increasing air and gas intake with computer chips), these cars can soon have Porches eating their Japanese dust. After-market parts for Japanese compact cars are now a $1.6 billion industry, up 150 percent over last year.

Import tuning has exploded in California, Texas, and Florida–states with sunny skies, open roads, and multicultural populations. The look is the street equivalent of a race car: bright colors, tail fins, and product logos standing in for sponsors’ names.

Kids in the import scene are not the only ones who jump at the chance to street-race. Middle-aged men with restored American muscle cars can easily be tempted to relive the drag days of their youth. Seventeen-year old Ian, who drives a 2000 Pontiac Trans-Am, says a balding guy in a Shelby Cobra pulled alongside him in a remote area and floored it when the light turned green. “When you get into American cars, it’s all these guys who grew up in the ’60s and have their Sunday cars,” he says. “When they see another Sunday car [the race will be] just a short little thing, and then they’ll pull over and talk about it.”

But when rival bucks pull up at a stoplight together, the race takes a different course. “[The import guys] just don’t stop racing; you stop and they go off at 100 mph. And if you meet them at the next light, they don’t want to have a friendly chat, they want to race again.”

Even on busy Santa Rosa Avenue on a weekend afternoon, any male in a sporty car can expect to hear the howling invitation of a foolhardy racer, flexing the muscles of his engine and pointing his eyes toward the red light about to change hues.

Wednesday Night Drags at Sears Point Raceway offer people a place to drag-race legally, and law enforcement and racing supply stores encourage the kids to take it to the track. However, on July 25, the track closed for remodeling, possibly launching an exodus onto the streets. Most of the kids say they’ve given up on Railroad Avenue in Cotati, long a racing hot spot for its long straightaway and remote location. Crackdowns by local law enforcement have sent the serious scurrying all the way to Ukiah or San Jose, where Silicon Valley’s empty business parks make the perfect setting for late-night drags, which can draw hundreds who scatter like mice when someone on the lookout spots a cop.

IT’S SATURDAY, June 23, the day after opening night of The Fast and the Furious, a Hollywood flick that taps into the street-racing subculture. And the Opak Racing shop in Rohnert Park looks like a bustling Cairo street market. Kids fresh from the cinema stand shoulder to shoulder all demanding one thing: NOS.

That’s Nitrous Oxide Systems, a company that makes do-it-yourself kits with which for $600 you can be cruising at 60 and in two heartbeats be going 100. Just don’t install it wrong or you’ll ruin your engine–or blow yourself up.

Nitrous oxide plays a pivotal role in this new action film. It’s the ace up everyone’s sleeve. In SCUBA-like canisters discreetly placed under the seats, operated James Bond-style by secret buttons, and monitored by laptop computers plugged into the cigarette lighter and cranking complex algorithms, NOS is what makes imports cease being automobiles and more closely resemble the Millennium Falcon making the jump to light speed.

In a summer of blockbusters that went bust, The Fast and the Furious is the biggest surprise hit of the summer. And while the film’s website strongly admonishes viewers to always drive safely, even the most staunch devotee of public transit can’t help but be seduced by the film’s adrenaline-packed depictions of high-speed driving in a bright orange, logo-splattered “rice rocket,” street slang for a modified Japanese import.

Even film critic Roger Ebert had to raise his thumb.

Opak Racing owner Edmun X–a bright, congenial man who reminds you of your high-school math teacher (the cool one)–says business has steadily risen since the movie opened. Opak is the retail face of a larger, New York-based distribution company. X, who has a background in high-tech marketing, says they might launch a chain of Opak Racing stores. He drives a Mercedes Benz sedan, by the way.

With its shiny, bright-colored products lining the shelves, X calls Opak a toy store for big boys. Here any tune-happy gearhead with a monkey wrench and a few hundred bucks can create his own “kandy-kolored, tangerine-flake streamline baby.”

“These are the new high-tech muscle cars,” says Hechtman of Epic Images. “Older guys can’t believe how you can get 800 horsepower out of four cylinders, but it’s all in the technology.”

Lt. David Frazer of the Rohnert Park Police Department says police records show that on Friday, June 22, opening night of The Fast and the Furious, police hunted for a pack of Hondas and Camaros that raced around city streets for two hours. Chalk one up for the media’s influence on society: “Sure, movies influence people,” Lt. Frazer says. “The kids were all jacked up [from the film] and wanted to race.”

Also, some imports recently pulled over have been found to have nitrous oxide hooked up to their engines.

If officers catch a pack of kids dragging on a desolate road, they are cited for “exhibition of speed.” The amount of the fine is up to the judge, but is likely to be around $100 to $300. The citation allows officers to impound the vehicles for the night, which costs several hundred dollars more. If the racing occurs over multiple streets and yellow lines are crossed and red lights violated, officers can cite for reckless driving, a misdemeanor. Bystanders at street races are not cited, though they may have their cars inspected for infractions.

But the more things change, the more they stay the same. Lt. Frazer admits that juvenile street racing goes back to the 1950s, the golden age of American car culture. The era that gave birth to cruising, drive-ins, and parking at Inspiration Point may have even been worse: In 1954’s Rebel without a Cause, the kids not only steal the cars they race; they race them off the edge of a cliff.

“Heck, I even did it,” says Lt. Frazer of street racing. “I had a ’65 Pontiac GTO with three carburetors.”

Then he accidentally lets escape, though not without a certain pride, “I got five tickets in one year when I was 17. I’m surprised they still let me drive.”

The Cost of Cool

American Graffiti     The Fast and the Furious