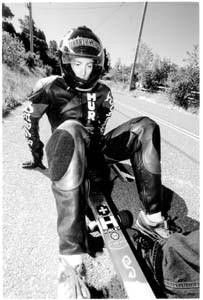 I’VE DONE ENOUGH questionable things in my life–bungee jumping, hitchhiking alone across Australia, climbing the Golden Gate Bridge–to know when something seems truly stupid. So it’s a bit of a mystery why I am standing outside the 7-Eleven in Sebastopol before 7 on a fog-cooled May morning, waiting for one of Sonoma County’s two professional street lugers to show up with a rig and a leather jump suit.

I am waiting to experience for myself what I have always considered the sheer idiocy of street luge–the extreme sport of hurling oneself down steep pavement on a high-tech flexie-flyer, knuckles and other tender body parts mere centimeters from being cheese grated to a pulp by concrete. Street luge looks like an urban cousin of European snow and ice sleds, but the sport’s true roots are in the American skateboard.

When I first saw street luge several years ago on the televised X-Games, the Olympics of the extreme sport world, I thought it was the most inane, limelight-seeking, wannabe, adrenaline junkie stunt ever. If you’re into road rash, just bicycle naked.

Others, of course, beg to differ. Kurt Hurley, owner of the Brotherhood Board Shop in Santa Rosa, has been competing in street luge events for two years, having migrated from professional distance running and skateboarding. “People have been riding skateboards on their backs down hills for a long time. This is the culmination of a lot of technology,” says Hurley, grabbing a metal rig that looks like some kind of deformed elongated guitar.

More than seven feet long and made out of aircraft aluminum, the 38-pound, $1,300 luge (pronounced “lewge”) has four wheels, faux-fur cushions for the head, back, and pelvis, and bars to hold the feet and hands at a steady 1 1/2 inches off the rushing pavement. Street luge, like many extreme sports, first gained notoriety during the 1995 ESPN X-Games. This fall, NBC is floating its own version of the increasingly popular extreme sports competition with the Gravity Games. Owing to Hurley’s zealotry, Santa Rosa will host the qualifier round over the Memorial Day weekend for the street luge and stand-up downhill skateboarding events.

With street luge coming to Santa Rosa, I figure I should take a test drive before lambasting the sport in print.

HURLEY AGREES to guide me through my luge debut, instructing me to meet him early enough to avoid traffic and to wear shoes that I don’t mind getting “a bit scuffed up.” He’ll provide a full armament of protective gear.

Hurley’s unlined face and easy manner belie his 40 years, but his waist-length balding blond coif fits the part of an aging skateboard dude. For Hurley, board riding is a way of life. Kids–including his 13-year-old son Kingsley–troop into his store after school to watch videos on one of three TVs. A young woman named Ivy brings in a plate of still-warm brownies to thank Hurley for taking her surfing. He asks several kids about school and points others toward the snowboard niche.

“I wanted a place where people could feel safe, where they didn’t feel like they have to buy anything,” he says of his shop.

Hurley’s wife, Kim, isn’t into street luge herself, but she runs the Sisterhood Board Shop next door, drives her husband to remote roads for practice, and puts up with his collection of toys, including the luge, four skateboards, and so many surfboards that Hurley has lost count.

When Hurley’s friend and race organizer Biker Sherlock mentioned that he was looking for a quality site for the Gravity Games qualifiers, Hurley knew just the place: the steep, gently winding Fountaingrove Parkway.

“Why not have something cool in Santa Rosa? Nothing really cool ever happens here,” says Hurley, adding that he was “shocked” at how receptive city officials were to the idea of closing half of the street to accommodate the race and an estimated 1,500 spectators. The Santa Rosa City Council voted unanimously to grant Hurley an event permit, although several Fountaingrove area residents voiced concerns that kids will want to copy the professionals sailing down the steep curvy one-mile course that extends from Daybreak Court to near Brush Creek Road.

“Anybody would have to be out of their mind to ride that road,” Hurley says. “It’s steep and there’s a lot of traffic.”

Not that that’s stopped Hurley, of course. He’s been clocked at more than 72 mph on Fountaingrove.

“But I don’t ride that course anymore,” he says. “You should put that in in case the cops read this.”

Street lugers, oddly enough, are considered pedestrians, and they just don’t mix well with cars, Sgt. Steen says. “They don’t have the control a vehicle does, they don’t have the braking power, and the visibility is a lot less.”

Hurley has never received a ticket, probably because of guerrilla tactics such as riding in the Sunday dawn hours and getting his luge on and off the road in less than 30 seconds. And, he says, he can easily maneuver away from traffic.

WE HEAD OUT into the west county in Hurley’s jacked-up shiny pick-up truck, the luge sticking several inches over the tailgate. We stop at the top of a steep, wide, curving road, bounded by open pasture and eucalyptus trees. Hurley zips into his heavy leather jump suit, pulls on gloves, and tucks in his long hair.

He walks his sled a few feet in front of backup driver Jeff Henderson, who is peering into the rear-view mirror for cars. At the clear sign, Hurley starts paddling, working up speed before he lies back and revs down the hill feet first, his chin tucked against his chest so he can see the road ahead. Henderson follows several yards back to protect Hurley from cars coming up from behind. It’s up to Hurley to avoid oncoming traffic, staying in his own lane and steering by leaning to either side.

Just as he starts, a beige sedan comes around the corner and veers onto the shoulder, the obviously surprised driver whipping his head around for a better look. Hurley picks up speed, clocking in at 61 mph before he sits up and puts his hands out to catch air and slow down. He drags his heels along the pavement, smoke pluming up from burning rubber soles as he comes to a stop and quickly pulls his rig off of the road.

Indeed it is–Hurley accelerating to 65 mph. Subsequent runs are a bit slower and uneventful, except for the dog that comes charging out of a driveway to chase Hurley down the road.

Then it’s my turn, and we drive to the bunny slope of street luge, a residential road just west of Sebastopol. Hurley goes to the top of the hill and tests the route, standing upright on a skateboard, cruising by at about 50 mph.

Hurley hands me his now sweat-infused leather suit, gloves, and helmet and drags the luge about 30 feet up the hill. He holds the luge still with his feet and tells me to lie down, my neck craned upward.

“OK, just keep your feet up,” Hurley says. “To steer, just lean to one side.”

Hurley lifts his foot and the luge starts moving.

The wheels rumble against the pavement picking up speed, and I feel completely out of control within seconds. My head is an ungainly bobble, the visor steamy from my nervous breath, and the luge is heading toward the center line. I see myself careening onto the gravel shoulder and around one of the mailbox posts lining the road.

I drop my right foot slightly. Nothing happens, so I lean my right shoulder and hip down. The luge corrects, heading down the middle of the lane. Relieved to be moving in a straight line, I put my heels down on the pavement, my feet bouncing me to a stop on the gentle slope. I’ve gone a few hundred feet, at less than 20 mph.

Ready to try again, I drag the rig a few feet farther up the hill this time.

“Keep your elbows up,” Hurley advises. “You were dragging on the pavement.”

I turn my arm over to discover a ragged abrasion in the suit, grateful for its heft. I get in position again and point my feet inwards as Hurley releases the rig. As I pick up speed, I find the steering easier. After about a quarter mile, the cross traffic is looking a little too close and I put my heels down, pressing harder to prevent the bounce. As I slow down, I start veering onto the shoulder, and realize that I have no idea how to brake and steer at the same time. I rumble onto the shoulder and into the grass, just missing a reflector post, before coming to a stop.

After a small taste of luge, I still think hurtling prone down pavement at 70 mph is extreme lunacy. But the appeal is obvious. As the endorphins and adrenaline kick in, I immediately start waxing enthusiastic about the merits of speed and how it increases maneuverability.

The Gravity Games skateboarding and street luge trials on the Fountaingrove Parkway will be held Saturday and Sunday, May 29 and 30, from 8 a.m. to 5 p.m. Admission is free for spectators. Parking and shuttle bus service will be available at Maria Carrillo High School. For more information, call 546-0660.