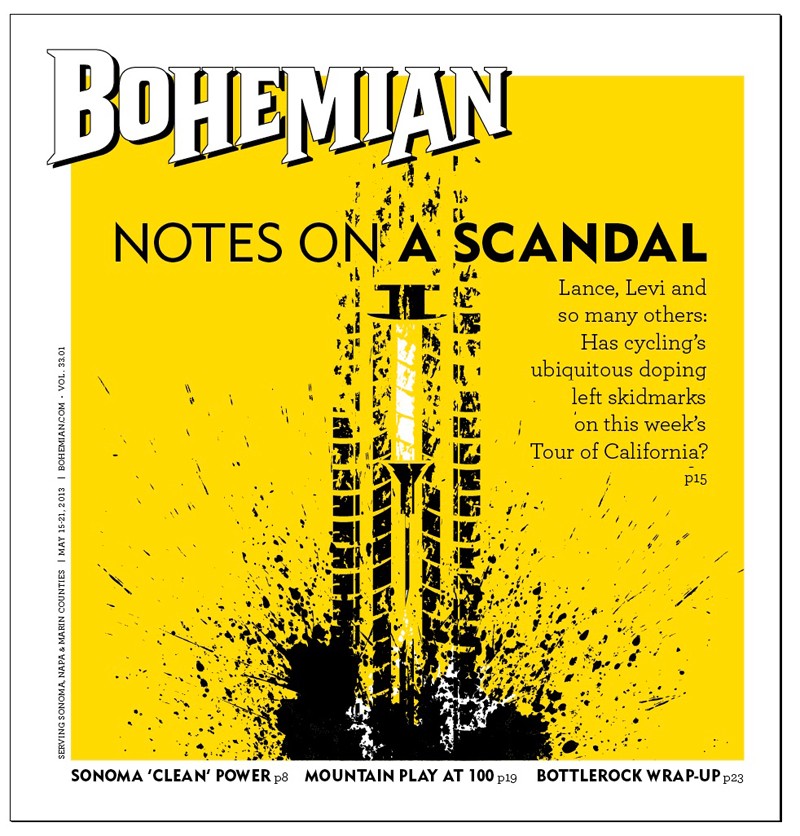 By now, we all know about the wreckage. In January, Lance Armstrong sat down and told Oprah Winfrey, and thereby the world, that he used illegal performance-enhancing substances to win a record seven consecutive Tour de France titles. Now disgraced, Armstrong had lived an elaborate lie for years, having apparently taken ethics classes from Professor Tiger Woods. Even LiveStrong, the cancer research foundation he founded after beating the disease, asked him to step down to avoid infection from public disgust over the scandal.

Alberto Contador, Tyler Hamilton, Floyd Landis, Ivan Basso—the list of cyclists who doped goes on and on. But none hurt as much for Sonoma County as Levi Leipheimer.

Just before Armstrong’s fallout, Santa Rosa’s hometown hero also admitted to years of doping—and ratted out Armstrong, his former friend, in exchange for a reduced suspension in the form of a six-month ban. (Meanwhile, Armstrong can never compete again in a professional organized race.) Leipheimer still trains in Sonoma County, taking on the hills and two-lane back roads, and his annual GranFondo ride remains a successful fundraiser—it’s raised $60,000 in each of the last two years to keep the Tour of California in Santa Rosa. But he has yet to find a team to take him in.

This year, the three-time ToC winner won’t be competing in one of cycling’s biggest races, which finishes this year in his own front yard.

With Santa Rosa hosting the final stage of the race, this could possibly mitigate any decrease in public interest resulting from the doping scandals. On May 19, racers will cross the final finish line downtown, the champion will don the yellow jersey, and thousands of cycling fans will cheer on a nationally televised broadcast, as if the sport hadn’t been tarnished by a doping scandal with a trail longer than a vine of hops. At least, that’s what race organizers are predicting.

“People who love bicycle racing are always going to love bicycle racing,” says Chris Coursey, a volunteer with the ToC organizing committee. “They may have anger or disappointment over revelations from the last few years, but the sport is still there. It’s still one guy riding 120 miles in almost 100-degree temperature.” Casual fans who might be turned off by steroid scandals still appreciate a good show, and “that’s what we do well here in Santa Rosa,” says Coursey.

But another loss for the casual fan are all the big names. Leipheimer’s six-month ban is over, but he hasn’t found a team. Minus even more stars barred from riding, or without a team—and minus Chris Horner, who’s treating a knee injury—many major household names aren’t riding in this year’s ToC.

Will it affect attendance? Already, there are fewer official team afterparties planned than in past years, but still, many cyclists seem eager to watch the grand finish. “Did Barry Bonds doping mean you stopped caring about baseball?” asks Blake Godwin, a diehard cyclist raised in Santa Rosa. “People dope in every sport, but in that era of cycling, everybody did. I’m not making excuses, but that does change the framing.”

“If you use supplemented oxygen, cocaine and Diamox to get to the top of Everest, no one would ever say you didn’t climb Everest,” says Santa Rosa cyclist Marcos Ramirez. “These are amazing athletes, and I’m proud to have bicycle culture be so alive and well in Sonoma County. So the style and politics of racing will change. This is good.”

Coursey is optimistic as well. “Levi wasn’t the first person to promote bicycling in Sonoma County,” he says, “and he won’t be the last.”

Since the scandal’s peak about six months ago, very few major bombshells have gone off in the cycling world. “I don’t know if there’s going to be additional reaction,” says Raissa de la Rosa, Santa Rosa economic development specialist and co-chair of the local organizing committee for the ToC. “It doesn’t seem to have had an effect overall on people’s enthusiasm in cycling.”

Is hosting the race still a good investment for the city? De la Rosa says yes. Santa Rosa has hosted the ToC five times, and in 2012 hosted the race’s start, with teams and ToC crewmembers calling the city home for about a week beforehand. That generated about $7 million in revenue for the city, says de la Rosa, with a total investment of about $500,000 raised through sponsorships with big companies like Ghilotti Construction and the Ratto Group, fundraising from Levi’s GranFondo, and various in-kind donations.

This year, the cost to host the ToC is approximately $300,000, and the city hopes to see $1.2 million or more in revenue. But the biggest bonus of hosting the finish is the two-hour commercial for beautiful Sonoma County, with Santa Rosa as the focal point, on NBC’s televised broadcast of the final leg of the race. “It’s huge to be the highlight city for that,” says de la Rosa. “It adds to the perception of Santa Rosa as an iconic city for the tour.”

Strategically, and not without risk, the city put in only one bid for this year’s race: hosting the final stage. Last year’s race opener took an enormous amount of work. To make the efforts put in motion pay off, says de la Rosa, “the thing that made sense to us was to do the overall finish. It’s an honor.”

Santa Rosa is home to two teams: BMC and Bissell. As Coursey explains, BMC is the perennial Tour de France contender, while Bissell has to work extra hard to be invited to compete in that race. For local fans, the absence of Leipheimer will stand out. “He’s won it three times—he’s the face of the tour,” says Coursey. “But it’s a great race without him, also.”

Santa Rosa has other riders in the race, like Jeremy Vennell and Michael Torckler, the latter of whom was informed one day before the race began that he would be riding on team Bissell. Torckler came back from a horrific injury sustained in a hit-and-run accident last year on Pine Flat Road. “It’s an incredible story that he’s even riding a bike this year, let alone in this race,” says Coursey. (BMC’s biggest name, Cadel Evans, is riding in the Giro d’Italia, which takes place the same week as the ToC.)

Despite the doping scandal and loss of big names, the ToC is pedaling on. And yet de la Rosa stops short of confirming Santa Rosa’s participation in next year’s event. “I’m more thinking about five years from now, and how we can build it up,” she says.

Indeed, this year may prove to be a barometer of the public’s ability to forgive a sport in the wake of a scandal.

Andy Schleck This 27-year-old 2010 Tour de France winner broke his sacrum in a crash in 2012 and hopes to finish strong for team RadioShack Leopard in the ToC this year.

Peter Sagan He won five stages in last year’s ToC, including Santa Rosa’s starting leg, and has won eight legs of the race in his career. The 23-year-old from Slovakia is currently hailed as the world’s No. 2 cyclist.

Jens Voigt The legendary German rider is now in his 40s but can still put the pedal to the metal—er, the foot to the pedal. This tough rider doesn’t make excuses and is always a force to be reckoned with.

Tejay van Garderen The American rider finished fifth in last year’s Tour de France, fourth in the ToC and was named the Best Young Rider of the race. He’s been called a clear favorite to win this year’s race for BMC of Santa Rosa.

Jeremy Vennell This Santa Rosa rider was honored last year as the ToC’s most aggressive rider, and reports say he has been riding well in his training courses.

Michael Torckler Another Santa Rosa local, he was seriously injured in a hit-and-run accident while riding on the notoriously steep Pine Flat Road in Geyserville. He found out the night before the ToC began that he would be riding in the 750-mile race.

Ryan Eastman A 20-year-old Petaluman on the Bontrager team, this is already his second year riding in the ToC.

Next ArticleNews Agencies Fight Back