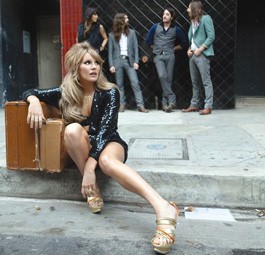 Two years ago, it looked for all the world that Grace Potter’s band, the Nocturnals, might have reached the end of the line. After two studio albums, the group was on thin ice; the bassist had left, and Potter was about to record a solo album with respected producer T-Bone Burnett.

“I think like every band in the whole world, there’s that moment of truth, where you figure out whether you’re going to make pop music or if you’re going to remain in a comfortable ether of coolness,” Potter says in an interview, explaining the key problem within the group. “And I want to be cool, but I don’t care about being cool as much as I care about making a career out of this—a long, fruitful career.”

Hence, thanks to a reshuffling of members, Grace Potter and the Nocturnals are very much a band again. Potter’s solo album with Burnett is on hold while the group releases a stirring new self-titled album showcasing an identity, focus and confidence that didn’t exist during their first five years together.

“I think it all comes down to growing up,” says Potter, who sings and plays keyboards and guitars. “I don’t think we’ve hit our prime. I think we’re just finding it. It’s like we’ve been prepubescent this whole time in our musicality and our performance and our sexuality and our comfort onstage. This is like we’ve graduated college, and now it’s time for real life.”

Leaving an opportunity with multi-Grammy winner Burnett might seem odd, but, she says, “I wasn’t ready for that. Obviously, the temptation for a woman to go break off solo, if she’s got talent and she’s got a voice, is great. But I wanted the band. I wanted to remain true to what made me the way I am, what helped me make music and make it good.”

At the helm of Grace Potter and the Nocturnals is Mark Batson, who’s worked with such heavyweights of hip-hop as Eminem, Jay-Z and Dr. Dre. Baston co-wrote six of the album’s 13 songs with Potter and also fostered an atmosphere in the studio that helped the band to tap into its primal side.

“We just wanted the spirit, the vibe and the energy as if we were onstage,” Potter said. “So what Mark would do is he would bring in 10 to 20 girls and people into the booth, so it was like we were at a live show. Everyone he was bringing into the studio, we’re talking about poets, we’re talking about artists, actresses, actors, rappers, I mean, it was really a genre-bend and a mindfuck. But it was a great time for us to experience all of these different types of people.”

The energy of the sessions translates emphatically. On “Paris (Ooh-La-La),” “Hot Summer Night” and “Only Love,” Potter exudes sensuality, sass and passion, while the Fleetwood Maclike pop of “Tiny Light” and “Colors” makes for a rich, well-rounded album. And though the band has finally come into its own, Potter is even more excited about what lies ahead.

“I do have great hopes and aspirations for the future,” she said. “I think that’s the best thing we have going for us, [that] nothing is ever good enough. We’re constantly trying to make our music more profound, more important, more realistic and more fabulous. I think that that’s it. It’s really not ever taking ‘good enough’ for good enough.”

Previous ArticleHubbub in the Cistern

Next ArticleFeb. 2-9: Across the Bridge