On the cusp of a veritable local restaurant empire, Mark and Terri Stark remain committed to the same ideals they began with 10 years ago in Sonoma County 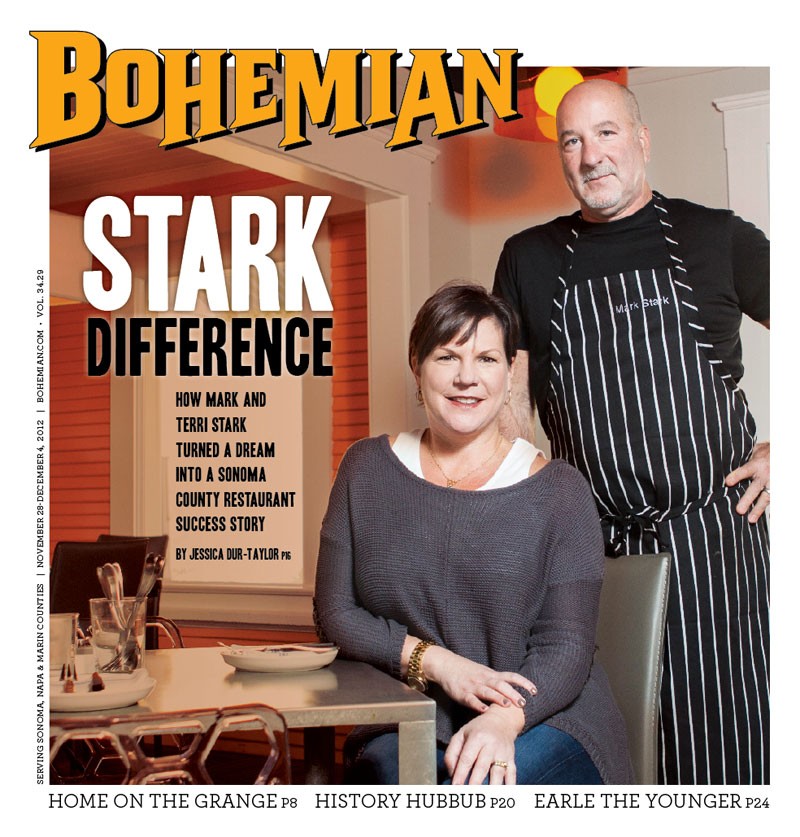 When Mark and Terri Stark opened Stark’s Steakhouse, their fourth restaurant, on New Year’s Eve of 2007, their intention was to create a fine dining experience where people could enjoy a high-quality cut of meat. But within months, as their numbers began to plummet alongside the stock market, the restaurateurs were in a panic.

On a trip to Seattle, Mark watched an empty bar fill with people enjoying the cheap eats of an afternoon happy hour. Inspired, he brought the idea home and created the “Blues Buster Happy Hour Menu with Prices Good Until the Dow Hits 10,000.” Soon the bar was packed, even overflowing into the dining room. Thanks to a traveling food blogger, Stark’s happy hour gained a reputation from Southern California to Washington state as the best afternoon nosh on the West Coast.

“The day the Dow hit 10,000,” Terri tells me, “the phone was off the hook with people begging us not to stop.” Unwilling to let their customers down, the Starks revised their promise. “We said, ‘We’ll do it until your house value is back,'” Terri says, laughing. To this day, Stark’s unchanged happy hour menu, arguably the best thing to come out of the bad economy, lives on.

Mark and Terri met at California Cafe in Palo Alto in 1995. Just a few years later, as Silicon Valley’s dot-com boom went bust, business opportunities became as scarce as Twinkies this Thanksgiving. Doors were swinging shut. “Forget about even borrowing an egg from your neighbor,” Terri laughs, “this was survival of the fittest.”

In 2001, tired of trying to keep up with the Joneses, the Starks left Menlo Park, where they’d been working in restaurants for years—Mark cooking, Terri catering—and moved to Sonoma County. They were immediately plugged into the culinary circuit, thanks to Terri’s well-connected mother, with roots in the county four generations deep. Within four days, acclaimed local chefs Michael Hirschberg and Lisa Hemenway were in their living room, chatting about possible opportunities. “The climate and the people really resonated with us,” Terri says. Doors started opening.

Literally. One afternoon, in an effort to avoid the traffic on 101, Terri stopped for a glass of wine at the Orchard Inn on Old Redwood Highway. Charmed, she mentioned the site to Mark, who liked how “it’s in the middle of nowhere, but it’s also in the middle of everywhere.” During a meeting with their real estate broker the next morning, they found out the building was for sale and immediately needed a thousand dollars to make a bid. “I wrote the check,” Terri says, “and then called the realtor to ask when it might get cashed.” Mark chimes in: “We didn’t even have a thousand dollars.”

In fact, the couple who would go on to open five successful restaurants didn’t even have a business plan—”We had something written on a napkin,” Mark quips—but they did have a vision. Since they rarely eat entrées (“Too big a commitment”), they wanted to open a restaurant that served nothing but appetizers. “That style of sharing,” says Mark, “creates a mini-party.”

And so, a year after moving to the county, the Starks opened Willi’s Wine Bar in August of 2002. “There was never any plan to open more than one place,” they tell me. But after three months of filling tables, another door swung open, and they were invited to start Willi’s Seafood & Raw Bar in Healdsburg. And thus the Starks’ vision of running a little mom-and-pop restaurant—Mark cooking, Terri managing, both of them relaxing over espresso in the afternoon—was soon supplanted by a much grander reality.

In just two years, they opened three restaurants, each time maxing out their credit cards and refinancing their house to meet the expenses. When it came time to name their third restaurant, a Mediterranean-style rotisserie and bar in Montgomery Village, they were determined to make use of the leftover coasters bearing the letter “W” from Willi’s. Turned upside down, they worked perfectly for the name Monti’s, a tribute to the kids who attend nearby Montgomery High.

Given their impressive roster of restaurants—to which their fifth, Bravas Bar de Tapas, has just recently been added—you’d be forgiven for assuming the Starks are as highfalutin’ as their cuisine. But you couldn’t be more wrong.

In stark contrast to the bottom-line approach of many restaurants, Mark and Terri are first and foremost concerned about the 245 people they employ. “We’re not here to make money,” Mark tells me. “We’re here to make friends.”

Proof can be found in the many employees, like Chris Smith, who have worked for them for nearly a decade, a lifetime in the restaurant business. Eager to learn the biz in the hopes of opening his own restaurant, Smith figured he’d stick around for about five years. Eight years later, after working up the ranks from line cook to sous chef to chef de cuisine to his current position as floor manager at Willi’s Seafood, he has no plans to leave anytime soon.

“The amazing thing about the Starks,” Smith tells me, “is how they help people reach their goals.” That and what he calls “the fringe benefits” of enjoying home-cooked meals and sampling new restaurants with his bosses, who have created one big extended family.

Smith embodies the Stark’s commitment to promoting from within, what Terri refers to as “stocking our own pond.” All of their chefs started out working for them as cooks, and, in some cases, dishwashers. Instead of stoking the flames of competition, the Starks value cooperation and mentorship. As Mark puts it, “You didn’t come out of the womb with a sauté pan and an apron. If you are a chef, someone helped to get you here, so you’re going to turn around and do the same thing for someone else.”

In a time when too many people are being devoured by vulture capitalism, the Starks’ “lift as we climb” philosophy inspires. During the worst of the economic collapse, they prioritized paying their workers over their taxes. As for the bottom line? A peek at their reservation books confirms that happy workers lead to happy customers. As Mark says, “You can’t get good food out of a miserable kitchen.”

Unlike other highly successful local restaurateurs, you won’t find the Starks opening a stadium-sized restaurant in the middle of Times Square—or anywhere outside of Sonoma County.

“In big cities, there’s a huge disconnect,” says Mark, who has worked in Seattle, Washington, D.C., and New York, where he graduated as co-valedictorian from the Culinary Institute of America. “You don’t know who you’re cooking for.” He much prefers “the huge circle” of Sonoma County, where, within the first month of opening Willi’s Wine Bar, local purveyors of food and wine—Steve Kistler, Laura Chenel and Jim Reichardt of Liberty Farms—were enjoying Mark’s culinary transformation of their own products.

In 2010, the Starks took their first trip to Europe, a place where culinary and community go together like baguettes and Brie. “We fell in love with the food in Barcelona,” says Terri. “The flavors were clean and the ingredients simplistic.” Inspiration met opportunity when a 1927 bungalow on Center Street in Healdsburg, formerly the site of Ravenous, became available for rent. “We’re never looking to open a new restaurant,” Mark and Terri insist, “but if a space opens up, we’ll look at it.”

When it comes to their restaurants, the physical space shapes the culinary experience. The moody romance of the building that once housed Santa Rosa’s oldest restaurant, Michelle’s, was, according to Mark, “screaming to be a steakhouse.” In the case of Bravas, the tiny kitchen is perfectly suited to the small plates of Spanish tapas, which include local sardines with black olive ink ($10), crispy pig ears with anchovy vinaigrette ($11), chilled octopus and chickpeas ($12), tuna belly salad ($10) and Patatas Bravas ($8), a fried potato dish from which the restaurant derives its name.

Hankering for a sliver of jamón ibérico or Idiazabal cheese? Allow the resident “Hamboner” to slice your fancy at Sonoma County’s first ham and cheese bar ($8–$18). In addition to beer, wine and several gin and tonic selections, a specialty cocktail menu makes the most of fun monikers like Ready, Willing and Hazel and the Dingo ($10).

Bravas (Spanish for “spicy” or “wild”) dazzles both the palate and the eye: vintage psychedelic Fillmore posters grace the bright orange walls, which contrast nicely with snow-white barstools and polished wood tables. The newly renovated backyard patio includes a full bar, a fire-pit and a covered deck.

“It’s like having a newborn after your other kids are grownup,” Terri says about the five-year gap between opening Starks and Bravas. Though their cheerful disposition and easy camaraderie belie the stressful nature of the job, the Starks are forthcoming about their challenges. “We forget about how hard the beginning is,” Mark says. “It takes years off your life to open a restaurant.”

“Exposure is the hardest part,” says Terri, who likens a bad review to “someone telling you your kid is ugly.” Thanks to the rise of Yelp, of course, everyone can be a critic, including a disgruntled drinker (“We had to cut him off”) or a misinformed naysayer who pooh-poohed the Dover sole, which isn’t even on their menu.

But in 10 years, the Starks have had only one significant faux pas: in September of 2005 they opened Bar Code, a sophisticated New York City–style lounge on Mendocino Avenue in downtown Santa Rosa. Perhaps because they were out of their comfort zone serving only alcohol, not food, or perhaps because the bar would start to get busy just when Mark and Terri were ready for bed, after two years Bar Code closed its doors, the very same day that Starks opened. “Everyone thinks opening restaurants is going to be really, really fun,” says Terri, “but it’s 90 percent business.”

Still, it helps to be in the biz with your family. Mark creates the menus, Terri designs the space, and both bounce ideas off the other constantly. “We’re together 24/7,” says Mark, “and we have a blast.” Even their daughter Katie, who at 18 started working in “the dish pit” just like everyone else, is now out on the floor at Bravas, serving for the first time.

If their restaurants are like children, each one is special in its own distinct way: Willi’s Wine Bar gets the most press, Willi’s Seafood stays the busiest, Monti’s is the neighborhood favorite, and, thanks to the wide appeal of happy hour, Stark’s has shown the most growth. Bravas, surely, will take on its own distinct shape. And yet the full tables are not what make Mark and Terri most proud.

“At least 20 employees who started out washing dishes and bussing tables now own their houses,” Mark tells me. “More than anything else, that is our greatest accomplishment.”

Next ArticleNov. 29: The Mickey Hart Band at the Uptown Theatre