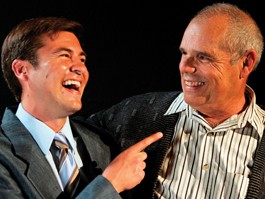 Death is not a dirty word. I’m dying&mdashand I can live with that.” So quipped the real-life professor Morrie Schwartz, whose affectionate words of wisdom and humorous observations were the heart and soul of journalist Mitch Albom’s bestselling book Tuesdays With Morrie, now adapted into a stage play by Albom and playwright Jeffrey Hatcher. Tuesdays is a month-long record of conversations that Albom had with his old sociology professor in the final weeks of his battle with Lou Gehrig’s disease, conversations that had a profound effect on Albom and how he chose to live his life.

That “death” line is a funny one, simultaneously playful and realistic, and Tuesdays with Morrie&mdashrunning through Oct. 28 at the Sonoma County Repertory Theater&mdashis crammed with similar ones. As in the book, in the play it is Morrie’s one-liners and artful questions that one is likely to remember the longest after leaving the theater&mdashthat and the performance of Joe Winkler as Morrie. Supported by the dependably excellent Dan Saski as Albom (who does a lot with what could have been a simple straight-man role), Winkler delivers what may go down as the finest North Bay stage performance of 2007. Both emotionally and technically&mdashwith all the little physical details of Morrie’s deterioration recreated with astonishing accuracy&mdashWinkler is a commanding presence, made all the more remarkable given that most of his lines have to be delivered from a sitting or lying position, with very little physical movement. Winkler does what he does with his voice, his face and his eyes. He takes every line, the juicy ones along with the simpler stuff, and mines them for depths of humor, affection, tension and pain that is often far richer than what was written on the page.

Director Jennifer King does a first-rate job of staging the most intimate moments of the play&mdashand this play has a lot of them&mdashwithout allowing the actors to either shape it too safe or jump the line into melodrama. Directing material like this is a dangerous game, and by anchoring the show with such pitch-perfect performances and finely tuned staging, it never strays into sappiness or preachiness, as could have easily happened.

I only wish the play itself were so good.

Since the book on which the play is based is essentially one long conversation between two men, whenever Saski and Winkler are engaged in debate or playful interrogation, everything remains engaging and Morrie’s delightfully philosophical musings are given the spotlight, as when Albom questions Morrie on his belief in God: “I used to be an agnostic, but now I’m not so sure.” Unfortunately, as adapted into a two-actor play&mdashit premiered Off-Broadway in 2002 has been staged by hundreds of small companies ever since&mdashthe whole structure of the thing is unwieldy and rather sloppily crafted, giving the sense that the script was thrown together in a hurry.

Especially problematic is the inconsistent way that other characters are brought to life, sometimes having Saski morph into another role (suddenly donning doctor’s garb to play Morrie’s physician giving his patient the bad news), sometimes having Saski and Winkler pantomime the presence of other people, pretending they are there when they are not. This will bother some more than others, but I found it jarring and unnecessary, the fruit of a playwright not willing to make stronger decisions toward a more coherent visual logic.

I found the set design by David R. Wright to be similarly jarring, mixing the nuts-and-bolts details of an old man’s apartment with whimsical autumn leaves (Morrie is in the autumn of his life, get it?), which dangle overhead and even protrude up from the floor, as with the enormous leaf that stands behind Morrie’s living room recliner.

In the end, the Rep’s production of Tuesdays With Morrie&mdashwhich negotiates through some of the script problems without being able to obscure them&mdashstill works well, packing a powerful emotional punch, mainly through the magnificent performances of Saski and especially Winkler. At the close, I was sorry to have to let Morrie/Winkler go, and, like Mitch Albom, was grateful for the short time I was able to spend in his presence.