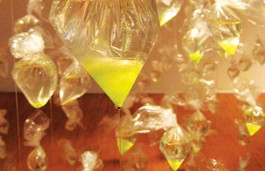 CRYSTAL WORLD: Vanessa Vobis aims to alter the environment one plastic bag filled with tap water at a time.

Vobis, whose “Science Space Species” installation with her mother, the artist Annalisa Vobis, opens April 17 from 5pm to 7pm at Santa Rosa’s Artspace404 Gallery (404 Mendocino Ave., Santa Rosa; 707.579.2787) is part of a movement to examine humankind’s effect upon and transmutation of the natural world. “A lot of our interest is in ecology and constructed environment and odd growths and new platforms in which learning can occur,” she explains.

While artists have traditionally taken inspiration from and a mimetic interest in nature, recognizing its perfection as being greater than our own, more contemporary artists are upending natural processes to reflect our modern meddling.

“The exhibit is intended to highlight American culture, their interpretation of our present environment,” explains Artspace 404 curator Nicole Lee. “It’s more about this idea of consumption, of creating an environment that’s purely synthetic, and what that says about American and global consumption.

“Everything these days is man-made.”

Intending to create an organic-synthetic installation, neither Vobis wants to be individually recognized within the “Science Space Species” exhibit, but the cheat sheet is that in addition to hermetic vivariums (“micro-ecosystems in jars,” Vanessa explains), Vanessa is creating a “crystal world” by hanging small plastic bags filled with tap water from the ceiling, while Annalisa will create a “radiolarian ooze” that mimics in 4-foot-high dimensions the infinitesimal carcasses created by deep sea crustaceans when they die. Vanessa’s bags will gradually prompt algae over the weeks. “It’s a little bit of a gamble,” she says. “We’ve tested it before in Michigan and Iowa, and the water turned bright green.”

Just the third show since the venue, supported by the Sonoma County Arts Council, changed its name and its mandate in order to show cutting-edge, idea-driven work, “Science Space Species” won’t have any pieces for sale. Lee admits it’s a risk. “For this piece, it’s about exposing the audience, submersing them in an experience,” she says. “Hopefully, with the [support of] sales that we’ve had from previous exhibits, we can pursue a concept rather than making sales.”

Able to support itself as a nonprofit and through visitor fees, the di Rosa Preserve (5200 Sonoma Highway, Napa; 707.226.5991) has recently changed its Gatehouse Gallery exhibition space from one showcasing collector Rene di Rosa’s personal holdings to being a vibrant contemporary space in the tradition of the kunsthalle. Currently on show is “(Un)Natural,” which brings together Bay Area artists Jessica Cadkin, Ross Campbell, Misako Inaoka, Carrie Lederer, Kathryn Spence, Lucrecia Troncoso and Tara Tucker to examine “what passes for” nature these days. Spence—who is known for her birds and other small creatures entirely wrought of garbage, stuffed animals, old clothes and other cast-offs—and Campbell join contributing curator Michael Schwager to discuss their work and the new dystopia on April 23 at 7pm.

Hugely conceptual but less involved with the outside world is emerging artist Daniel Glendening’s large installation at the Phantom Gallery (519 Mendocino Ave., Santa Rosa; 707.543.4512). Opening on April 24 from 6pm to 8pm, “On Memory, Loss, Growth and Regrowth: Sites” aims to impart the rich emotional connection Glendening has for four wildly disparate spots around the world: Santa Rosa’s Church of One Tree; what’s left of a Catholic Church and a hermit’s cabin near the deserted ghost mining town of Bodie, Calif.; and a rock formation in Ireland’s County Cork said to be the petrified remains of a sea goddess who occasionally reinvigorates to join her lover, the god of the sea.

“The themes are all revolving around these memories of loss and memory and regrowth, the elasticity of time and memory and the way that it informs the world around us,” Glendening says. “These four sites speak to me as being strongly spiritual and all having this sort of sense of time and cyclical growth. Those places are creating the conceptual backbone of the show.”

Glendening, 27, recently recreated an emotional rendering of his family’s home at the Artspace404, and is seemingly gripped by mid-youth nostalgia. Using sculpture, installation, drawing and video, “On Memory” seeks to express the extremely personal connection that Glendening has for his four chosen spots in a universal way that will stir even the indifferent visitor.

“I’m trying to create a sense of present absence and a sense of wonder and memory,” he says. “Whether or not the audience gets those exact specific responses isn’t really the point. I think that they’ll find their connection to it in a way that makes sense to them.”

The church in Bodie is marked by one post and a depression in the ground; the hermit’s cabin crumbles by a huge pile of old tin cans; the Church of One Tree is made of a single redwood predating Jesus; and the Irish sea goddess occasionally vacates her spot, at least in myth. “A lot of my work this past year has been examining the way that memory informs our daily life and the way that it changes,” he says. “It’s kind of this amorphous thing that we piece together on a daily basis to build our identity.”

Identity control and confusion interested even Rembrandt, whose depictions of beggars sometimes included Joseph and Mary, poorly clad and placed among ordinary citizens. A group of some 35 Rembrandt etchings of beggars, “Sordid and Sacred,” comes to the Sonoma Valley Museum of Art (551 Broadway, Sonoma; 707.939.7862) on April 18, opening for museum members on April 16 from 6:30pm to 8pm; on April 24 at 7pm, art historian Ann Wiklund will lecture on the exhibit.

These exhibits are the first to be overseen by SVMA interim executive director Kate Eilertsen. “The timing worked out to have an exhibit portraying beggars so beautifully and elegantly and respectfully at a time where there are so many homeless stories and so many people are out of work,” Eilertsen says. “The technique, the qualities, the emotional aspects—they’re all quite small—to put such power and impact into such a small image is quite amazing. People will have to take their time to look closely at the work.”

Planning to place an etching press in the museum’s glass-fronted front room with a roster of artists available on special days to show the public how the near-alchemy of etching is achieved, Eilertsen is well-known in Bay Area art circles for her innovation. At the Yerba Buena Center for the Arts, where she has been interim visual art director since 2007, she recently curated Nick Cave’s stunning “Meet Me at the Center of the Earth” exhibit featuring his exuberant Soundsuits, as well as a organizing a collection of contemporary Nordic craft art, most of which favored high form over regular function.

Formerly the administrator of exhibitions at Harvard’s University Art Museum, Eilertsen was the executive director for the Intersection for the Arts and teaches contemporary craft at the California College of the Arts. In the running for the executive director position full-time, she is currently keeping her hand on the rudder.

“I’m keeping the programs running as smoothly as possible,” she explains, “working with the board at understanding all the special things that the SVMA is and can be, and working with the staff to be a mentor.” The new ED is expected to be announced by the end of this month.

“Ansel Adams: Masterworks” opens April 17 from 5pm to 7pm at the Sonoma County Museum (425 Seventh St., Santa Rosa; 707.579.1500), drawing a connection between the great naturalist photographer and the North Bay. Composed of some 48 works, the exhibit will be enlivened by a lecture from Adams biographer and Gualala gallery owner Mary Alinder on May 7, as well as by a two-day workshop on shooting the “Land and Sea” April 19 and 26.

Meanwhile, George and Denise Rose have donated some 300 vintage wine posters, many of them prints created by the Korbel brothers before they turned their talents to the grape, that will be exhibited in conjunction with the Adams. A former rock photojournalist, Rose works with Kendall-Jackson, which is sponsoring the exhibits.

The Headlands Center for the Arts (944 Ft. Barry, Sausalito; 415.331.2787) is open to the public only three times a year, and April 19 from noon to 5pm is one of those rare occasions. Bring an adventurous appetite as the food in the Anne Hamilton–designed mess hall is a treat rarely gained. Expect to see artist-in-residence work as well as that being created by the many who rent studio space in the adjacent barracks. The gym will be used for performance and there will be readings all afternoon in the main building. This is a stellar event.