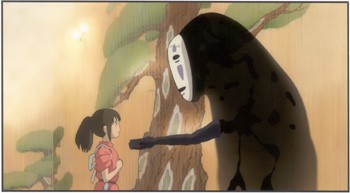 Spirit World: Chihiro meets the mysterious creature who’s been following her in ‘Spirited Away.’

‘Akiko’ creator gets ‘Spirited Away’ by the films of Hayao Miyazaki

Back in March, on Oscar Night, when Hayao Miyazaki’s animated oddity Spirited Away was awarded the Oscar for Best Animated Film–beating out Disney’s popular Lilo & Stitch and the 20th Century Fox megahit Ice Age–the majority of Oscar-watching Americans sat back and thought, “Spirited Away?” Till that moment, most Americans hadn’t heard of the film, in spite of the fact that it had already racked up worldwide grosses of over $250 million. To date, only about $8 million of that was earned by the dubbed version released in the States–and promptly rereleased in theaters immediately after the Academy Awards–and now in video stores.

One American who had heard of Spirited Away was Mark Crilley, who’d seen Miyazaki’s film in the original Japanese and who ranks himself as a major fan of the man behind such films as Princess Mononoke, Kiki’s Delivery Service, and My Neighbor Totoro.

“Hayao Miyazaki is huge in Japan!” enthuses Crilley, who lives in Detroit. “He’s like the Beatles, the guy we’re all waiting for to see what brilliant thing he comes out with next.”

Crilley, it should be said, rates as his own kind of national monument here in America–if you happen to be among the many fans of a certain loopy comic-book series about a super-smart Japanese girl who hangs out with people from the planet Smoo. Crilley is the creator of the insanely popular Akiko comic series, which just published its 50th issue, as well as the author of several bestselling spin-off novels, the latest of which is Akiko and the Alpha Centauri 5000.

I bumped into him at a book signing in California, where I promptly invited him to see the rereleased version of Spirited on the big screen. Though he prefers the Japanese-language version, Crilley was dazzled by the film all over again.

“I love the image of the subway train gliding across the surface of the water,” he says, recalling one of many memorable moments from the film. “The little flying pieces of paper–that can stalk you or cut you or just float around in air–there was such a magical quality to them.”

In the eerie and dreamlike film, a young girl named Chihiro is drawn into a magical realm of gods and spirits, where she is forced to work in a vast, spirit-world bathhouse in order to save her parents, who’ve been turned into pigs. “One of my favorite scenes in the whole movie,” says Crilley, “was when she gets to the guy with all those arms, operating the boiler that runs the bathhouse.

“The scene taps into that universal sense of being an outsider,” Crilley continues, “when you’re the new person in a school or a working environment. Chihiro is the new girl in this weird world, and she doesn’t know the rules yet. I think we all feel like that sometimes.”

Allowing that the film’s creepier aspects might be a turnoff to some viewers, Crilley says, “To anyone who sees this film and thinks, ‘Oh boy, this is not to my liking,’ I hope they won’t let this be the last Miyazaki film they see.

“If I had to pick one movie that I feel has been unjustly ignored, it would be My Neighbor Totoro. It is available on videotape, but the packaging suggests that it’s just another Japanese kids’ movie, so it’s never gotten the treatment that Mononoke and Spirited Away have gotten. I hope that people–and critics–will seek it out and reevaluate it, because I think it’s a flawless film on every level.”

Which brings Crilley to the one Miyazaki film he’d most like to see in the future.

“I’d love to see Hayao Miyazaki’s Akiko: The Movie,” he laughs. “If anyone can do my little stories right, he can.”