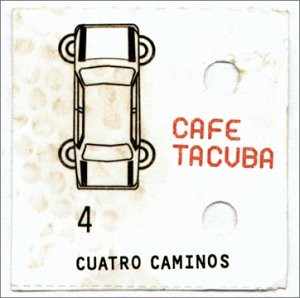 This is the surprise sleeper of the summer–a CD that deserves to be in the collection of every serious pop music fan. Café Tacuba started getting mainstream attention a few years ago after the band opened for Beck’s Midnight Vultures tour. On their fifth U.S. release since 1992, Café Tacuba continues to wow critics–now if they could just get some airplay. Or maybe an MTV reality show. How strongly do critics feel about this eclectic band, with its mix of alt-rock, ska, hip-hop, and Latin music? An Alternative Press blurb on the CD jacket proclaims that the Spanish-language Cuatro Caminos is the rock en Español Kid A. The All Music Guide goes one better, declaring that Kid A ain’t as good as this blazing Café Tacuba release. I’m inclined to agree. Certainly comparisons to Radiohead are inevitable. This Grammy-winning Mexico City band has a firm grasp on British rock, and singer Ruben Albarrán, who often barks his lyrics à la Johnny Rotten, at times sounds like Thom York on a tequila bender. But the praise hasn’t stopped there. After Café Tacuba contributed to the multiartist compilation En Sessions at West 54th Street, the New York Times declared their work as “the equivalent of the Beatles’ White Album for the rock en Español movement.” This time out, the band gets production assistance from David Friedman of the Flaming Lips and Andrew Weiss of Ween. The resulting songs are awash in postpunk sonic soundscapes, fuzz guitars, electronica sub-bass, and a sustained sense of wild abandon that makes Cuatro Camino one of the best rock albums of the year. Now if only the label would include English translations of the lyrics . . . (Greg Cahill)

Thirty years ago, buoyed by its inclusion in the Exorcist soundtrack, Mike Oldfield’s proto-New Age classic Tubular Bells hit the top of the charts and went on to become the biggest-selling instrumental album of all time. Now Oldfield has updated–for the fourth time in his career–that multi-instrumental tour de force in a new 30th anniversary edition. This time around, however, Oldfield has replayed and reproduced the entire release to take advantage of state-of-the-art recording technology (this new version also is available on the DVD-audio surround sound format). While the music has an almost quaint British gothic prog-rock charm–the track titles (“Fast Guitars,” “Basses,” “Latin,” Blues,” “Thrash,” “Ghost Bells,” etc.) reflect the wide range of styles and dominant instrumentation–there’s no denying the lingering appeal of Tubular Bells or its impact on a new generation of electronica buffs. Here are just a few quotes from the press kit: “Tubular Bells is a very hypnotic piece of music, very engaging,” says Chandrasonic, guitarist with midi warriors Asian Dub Foundation. “Tubular Bells–that’s the acoustic version of Kraftwerk’s Autobahn for me,” says Phil Hartnoll of world-conquering techno duo Orbital. “They stuck out in my mind when I was 10 years old. Being prepubescent and enjoying adult music. That daring, that novelty–what, only one song on one side of an album? Things like that showed us the way to compose instrumental music that isn’t classical music.” For Ibiza’s DJ Pippi, Tubular Bells was also a key record in his musical youth. “When I first heard it, I was very young, but I was very into this sound. It was a very important point for the development of electronic and acoustic music. And a very important point in my life–like Pink Floyd.” And if that isn’t proof enough that Oldfield’s ambient masterwork has found its way into pop culture, know that the “Tubular Bells” (Exorcist) theme is found as a ring tone on a Nokia mobile phone near you. (Greg Cahill)

He is one of the most distinctive rock guitarists ever to bend a steel string, and arguably the most wasted talent in a genre infamous for lives languished and lives lost to excess. After a six-year dry spell that ended in 1999 with the ass-kicking Who Else! this is Beck’s third album in four years. On Jeff, he reunites with producer Andy Wright, who gave Beck’s last album, You Had It Coming, its strong electronic edge. Here you’ll find plenty of patented flash and fire–the opening track, “So What,” boasts enough he’s-gotta-riff-and-he’s-gonna-use-it histrionics to fill a thousand rock-guitar websites–in short, all the instrumental tricks that put Beck on the map as a member of the legendary Yardbirds and later as a fusion pioneer. But Beck also delivers heartfelt melodic lines (the ’70s jazz-inflected “JB’s Blues,” for example) and the eloquent space jam “Bulgaria,” all reminiscent of his best work on 1974’s Blow by Blow and 1976’s Wired. He steps into Pat Metheny territory once again on the wistful “Why Lord Oh Why.” Whether shapeshifting electronics, full-throttle drum-and-guitar bashes, or techno- and funk-inflected balls-to-the-wall, unapologetic guitar rock, this is one rock icon who’s reclaimed his status as a latter-day guitar god. Crank it real loud. (Greg Cahill)

Johnnie Taylor, who died way too young three years ago, was one of the most woefully underappreciated R&B singers of the last 40 years, even though he was on a par with Otis Redding, Sam Cooke, and Al Green. Now we have this gift from the Malaco label, culling previously unreleased tracks from Taylor’s last six albums and his final 1999 sessions to help set the record straight. And, man, could he sing! Taylor started out as a gospel phenom, replacing longtime friend Sam Cooke in the legendary gospel group the Soul Stirrers after Cooke left to pursue a career in pop music. Taylor later recorded a string of marginal R&B hits on Cooke’s short-lived SAR label, and in 1968 rode to the top of the R&B charts with “Who’s Makin’ Love.” After the untimely death of soul great and Stax labelmate Otis Redding, Taylor became the biggest-selling artist on the Stax roster. But it was the smash 1976 hit “Disco Lady” that became his biggest success and in some ways branded him as less than the brilliant musical talent that he was. The best of his work can be found on the essential three-CD compilation Johnnie Taylor–Lifetime: A Retrospective of Soul, Blues, and Gospel, 1956-1999 (Fantasy/Stax), which was released three years ago and includes several tracks from the Malaco era. In addition to unissued songs, There’s No Good in Goodbye offers one track, “If You Take Your Love Away,” that, although released on his seventh album, appears here with a stripped-down mix that dispenses with strings, horns, and background vocals. The tracks were chiefly recorded at two legendary studios, Muscle Shoals Sound Studio and Malaco’s own studio. Even the overly slick production on some of the ballads, which often mars the Malaco material, can’t get in the way of Taylor’s velvety smooth delivery on an old-school soul chestnut like “If You’re Lookin’ for a Fool.” Meanwhile, “Crazy ‘Bout You Baby,” from 1986’s Lover Boy sessions, showcases Taylor’s awesome talent as a contemporary blues singer. We’re still crazy ’bout you, Johnnie. Highly recommended. (Greg Cahill)

B. B. King
Blues Kingpins: B. B. King (EMI/The Right Stuff/Capitol/Virgin) (Buy this CD)

In the only smart move they’ve made in years, the U.S. Congress proclaimed 2003 as the Year of the Blues (because it’s the 100th anniversary of blues pioneer W. C. Handy’s first encounter with the blues form, not because of the war in Iraq, rampant unemployment, or national malaise). Of course, the big story is the upcoming PBS multi-episode blues series supervised by filmmaker Martin Scorsese and enlisting a host of top film directors for an exhaustive look at the blues. Universal Music and Sony are teaming up for a massive release schedule that will include blues reissues and newly recorded material. But don’t let that media onslaught overshadow this new reissue series, featuring some of the greats of the genre captured in their most fruitful and formative period. Included in the Blues Kingpins series, six separate “best of” CDs, are B. B. King, Ike Turner, Elmore James, Fats Domino, John Lee Hooker, and Lightnin’ Hopkins from their peak ’50s Imperial/Aladdin/RPM/Flair/Sue sessions. Some of this material has never been heard on CD. Each disc contains liner notes by music writer Bill Dahl. A portion of the profits from the series will be donated to the Blues Foundation, a nonprofit corporation headquartered in Memphis that helps to preserve the blues through such programs as the Blues Hall of Fame and the W. C. Handy Blues Awards. In addition to being the first time much of the material has been released on CD, the Blues Kingpins series offers some sides which were previously unissued in the United States altogether. For instance, J. W. Walker’s “Can’t See You Baby” (he later became known as Big Moose Walker) on the Ike Turner disc has only seen the light of day on a very rare Japanese two-CD set until now. Among the tracks that have never been reissued previously in the States are the Hooker recordings cut with his Detroit road band, the Lightnin’ Hopkins sides from Modern/RPM labels, most of the Ike Turner material, some of the nonhit Fats Domino, and at least one B. B. King track (“Please Hurry Home”). And it just don’t get any better than R&B pioneer Ike Turner wailing “You’re Drivin’ Me Insane” or tickling the 88s on “Loosely.” Essential releases, one and all. (Greg Cahill)