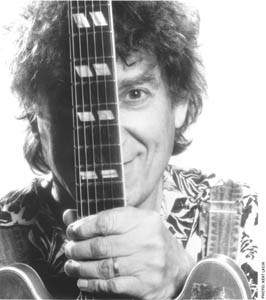 Over the years, the label has opened its doors to such North Bay artists as Roy Rogers, Norton Buffalo, and Mitch Woods & His Rocket 88s.

It’s something to squeal about.

At the ripe old age of 30, Alligator Records has helped define the often funk-laden and percussive sound of contemporary blues. Label founder and diehard blues fan Bruce Iglauer invested a small family inheritance to record his idol, the whirlwind slide electric blues guitarist Hound Dog Taylor and the Houserockers, whom Iglauer had seen performing in a Chicago storefront window. The resulting album, still among the best in the genre, helped finance the next recording (Big Walter Horton with Carey Bell) and established Iglauer as perhaps the most important blues promoter of the past three decades.

Today, Alligator Records is widely regarded as the premier blues label in the United States. The Alligator set–two CDs, one recorded in the studio and one live–is a steal at under $20.

“Iglauer has done his duty, risking everything to follow the blues god,” the Washington Post recently opined. “When he dies, he’s going straight to the roadhouse Valhalla.”

From the November 8-14, 2001 issue of the Northern California Bohemian.