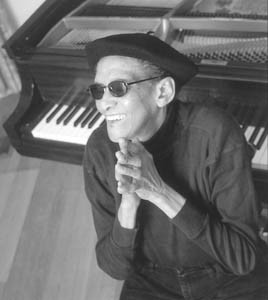 IS THIS A CASE of hackers run wild? The All Music Guide, one of the Internet’s most authoritative musical sites, describes a close encounter between jazz balladeer Jimmy Scott and the Beatles. The Web page–replete with a photo of the diminutive Scott cradling a hefty old chrome microphone–claims that during the early ’60s, and before his supposed death in 1986, Scott met a young songwriter named Paul McCartney, inspiring a tune with a favorite expression of Scott’s, ob-la-di ob-la-da. According to the website, in an effort to avoid an alleged plagiarism suit, McCartney later paid off Scott’s alimony bills and bailed the diminutive musician out of jail. But not before Scott had gone on to record the conga intro to the Rolling Stones’ “Sympathy for the Devil.”

It’s a grand tale–none of which is true, at least not the part about meeting the grim Reaper. You see, the announcement of Scott’s death was premature.

The 75-year-old Scott–who launched his career 50 years ago as a singer with Lionel Hampton’s celebrated swing band–is alive and well, working on an autobiography (set for release next year) that should help set the record straight. He can be heard on a gorgeous newly recorded CD, Over the Rainbow (Milestone), and his classic 1969 Atlantic Records album, The Source (Label M), has just been released for the first time on CD.

Indeed, there is a flurry of activity around Scott: In the past couple of years, he has toured Japan and Europe extensively, been saluted by the likes of Ray Charles and Lou Reed in a Bravo Profiles cable TV showcase, and worked as a fashion model in an Italian advertising campaign.

There is no question that Scott possesses one of the most beautiful voices in the jazz world–that is reaffirmed over and again on the lush ballads featured on Over the Rainbow–or that he has enjoyed a most unusual career. One of 10 siblings, all of whom sang at their mother’s church, Scott (like one of his brothers) never experienced puberty, the result of Kallman’s syndrome, a hereditary hormonal disorder that stunted his growth and prevented his voice from developing beyond boyhood. That left Scott with an angelic, feminized voice. While the condition is now reversible (his brother underwent hormonal therapy), Scott chose not to risk losing his distinctive style. “I fought through it,” Scott has said of his condition. “It didn’t matter. I was accepted in show business back in the early ’40s. That helped a lot, and it never bothered me like it might some others.”

His big break came in 1949, when Lionel Hampton hired him, billing the then 24-year-old singer as “Little Jimmy Scott.” The labels of some Decca sides mistakenly credited Scott’s vocals to Irma Curry, Hampton’s female vocalist at the time.

Scott scored a No. 6 hit with “Everybody’s Somebody’s Fool.” But despite some success as a Savoy records artist, Scott spent time away from the microphone, working as a hotel shipping clerk and a caretaker.

In the late ’80s, Village Music record store owner John Goddard tracked Scott down and hired him to perform at a private party–a move that helped persuade Scott to return to performing. His career took off again in 1990 when record industry bigwig Seymour Stein heard Scott singing at songwriter Doc Pomus’ funeral. Stein signed Scott to a high-profile Warner Bros. record deal. Three albums followed–one on Sire, one on Warner Bros., and a third on the smaller Artists Only! label.

Over the Rainbow includes some of Scott’s finest work.

“In the fragility of his voice,” biographer David Ritz opines in his liner notes, “there is enormous strength. His songs say that we can live with our inconsistencies; we can be fools but still survive; we can still hope for those pennies from heaven.

“We look to him for lessons in how to live out lives with patience, dignity, and a sense of wondrous beauty.”

Jazz on the River