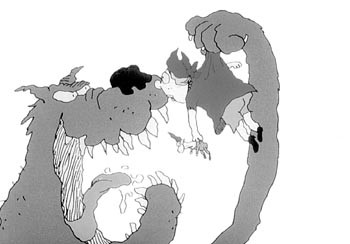 Not kids’ stuff: Adults will appreciate the new Spike and Mike’s compilation.

THE LATEST edition of Spike and Mike’s Classic Festival of Animation is their best to date. The biggest laugh you can get these days seems to come from mistreating an animal, as seen in some of the really low-humored points of the Twisted Animation Festivals over the years.

What’s surprising in this year’s fest, then, is not just the usual hilarity but also the surprising compassion for animals manifested in this selection of a dozen and a half cartoons.

Sounds drippy, I know, but there’s nothing cheaply sentimental about the best cartoon in the festival, “Panther,” by Vuk Jevremovic. It is a thoroughly serious, painstakingly animated, and bottomlessly tragic view of a large cat in a small cage.

Jevremovic scores the work with angry funk and acid-rock guitar music, implying not just the panther’s suffering but also his rage. The images are thinly painted and repainted on canvas: a black panther alive and staring. Sometimes he’s full-faced and flat-eyed as he looks at the pale distorted heads that peer at him through the bars. Sometimes he fades in a scribble of paint into the skinned carrion he will be one day, propped up for autopsy. Always there is the endless pacing. In his mind’s eye, he sees images of a tree in an African plain.

Then there’s the fantastic “When the Day Breaks.” Not since Robert Crumb have animals been used so piercingly to act out a story of urban angst. The tale of a brush with death is told without dialogue. In a gray, gray city, a middle-aged chicken is hit by a car as it crosses the road. Mrs. Pig, seeing the tragedy, goes home to her apartment to fix herself a consoling bowl of potato peels and milk.

Also noteworthy is “One Day a Man Bought a House,” which is a lovely absurdist piece of Norwegian claymation that progresses from slapstick cat-and-rat story to tender love story.

As yet more solace to hearts broken by “Panther” are two cartoons based on the Fleischer Brothers’ style of horror and jazzy comedy: the Muppetian “Graveyard Jamboree with Mysterious Moze,” from a novelty tune once recorded by the Cheap Suit Serenaders; and “The Ghost of Stephen Foster” made as a music video for the Squirrel Nut Zippers.

As the after-dinner mint, the festival serves up a reprise of last year’s “Billy’s Balloon,” a vicious comic short that depends on the sort of violent humor you dread to analyze. I think this primitive cartoon is an answer to “Panther”: the question “What kind of bastards would lock up a magnificent panther in a disgusting cage?” is rejoined by “What can you expect in a world in which even inanimate objects are scheming their revenge?”

In this case, a nice red balloon unexpectedly turns on its young master, an ugly wall-eyed toddler. The evil balloon even pauses for a moment to look innocent while a few adults walk by to smile at the kid and his plaything.