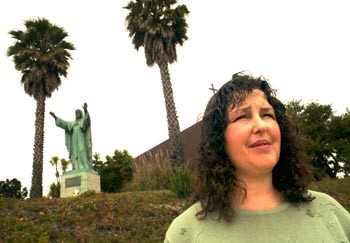 Abuse Accuser: Terrie Light, who was raped by a priest at age 7, has formed the statewide Survivors Network of Those Abused by Priests. Despite recent apologies, like the one delivered last week by newly installed Diocese of Santa Rosa Bishop Daniel Walsh, Light and other victims say the church has a long way to go to make amends.

Bay Area dioceses are ready to talk about priests, power, and pedophilia. Survivors just hope they are ready to listen, too.

FOR MOST ROMAN Catholics the period of Lent is a time of healing. Each spring the 40-day period from Ash Wednesday to Easter emphasizes penitence, encouraging the faithful to face their sins and be accountable for past wrongs. It is part of the festival of Easter, meant to celebrate rebirth and the resurrection of Jesus Christ.

But Terrie Light usually just gets ticked off. “I got to be so pissed off every Lent,” says Light, a licensed therapist and West Coast director of Survivors Network of Those Abused by Priests. “The church talks about turning away from sin, but it hasn’t been doing that itself. As an institution, it has been abusing people who go to the church to get healed.”

Light was 7 years old when she was raped by her Hayward Roman Catholic congregation’s priest. She didn’t talk to anyone about it for years, until she was in therapy in her 30s and finally found the courage to report the rape to the Roman Catholic Diocese of Oakland. Rather than receiving spiritual healing, Light found herself feeling as if she’d been violated again because the priest taking the report didn’t seem to believe her.

Light was correct in her observation. The priest who took her report told her as much and apologized for his insensitive behavior when they met again last month at a unique reconciliation between victims of clergy abuse and the Diocese of Oakland. During the service, survivors spoke of their experiences and feelings of betrayal, and church leaders apologized for a history of denial in dealing with sexual abuse.

The priest who had taken her report “came up to me after the ceremony and said, ‘I didn’t believe you. I couldn’t believe someone could do that to a child. But I believe you now.’ ” Light relates. Her normally therapist-calm voice cracks as she swallows back tears.

“That’s the change I’m working for in the church. People with good hearts getting out of that denial.”

Sins of the Fathers

Jesus’ words, spoken to his apostles during one of his earliest sermons, have long been considered gospel by the Catholic Church. But Sister Barbara Flannery, chancellor of the Diocese of Oakland, says that the church, while trying to help people in need, has for too long ignored those hurt by its own. Flannery began working with survivors of clergy abuse five years ago, so when Pope John Paul II encouraged dioceses to celebrate Jubilee 2000 by apologizing for past faults, the diocese decided to focus on clergy sexual abuse. She and Light gathered a group of survivors of sexual abuse to plan the reconciliation with Father Dan Danielson and spent eight months creating a dialogue of healing.

“We had not a clue of the media frenzy to follow,” Flannery says. “We just sort of thought that everybody was having their own apology services.”

Instead, newspapers around the country ran stories about the event, and dioceses from Florida to Oregon are seeking advice to set up similar events. Perhaps that’s because until now the church has been so hesitant to talk about priests and sexual abuse, despite ongoing reports of high-profile problems.

According to the Boston Globe, 1,000 priests in the United States have been identified as pedophiles over the past 20 years. The church has paid more than $1 billion to settle cases with victims of sexual abuse. Tom Economus, executive director of the Linkup, a national organization for victims of clergy sexual abuse, estimates that the number of pedophile priests is closer to 3,000, and that’s not even counting Protestant pastors.

“The Christian clergy ends up being a safe dating service for pedophiles,” Economus writes.

Light, Economus, and others say that the problems have endured because, in the past, pedophile priests have simply been quietly reassigned to different dioceses. For example, the Rev. Brendan O’Donoghue, a Massachusetts priest accused of multiple cases of child molestation during the mid-’90s, was reassigned 12 times during his first 15 years in the priesthood. During that time his superiors sent him to a secluded abbey to pray and make a confession, as well as checking him into the House of Affirmation, a treatment facility for priests. The center, which was run by the Rev. Thomas Kane, closed down in 1989 amid allegations of mismanagement. Kane was later sued by a man alleging that he had molested him as a child.

In Northern California, the Diocese of Santa Rosa has suffered a 10-year string of sex scandals involving five different priests, with complaints including child molestation, sexual harassment, and financial mismanagement. During that time the 14,000-member diocese paid out $6 million in claims and counseling, bringing the diocese on the brink of bankruptcy and last year toppling Bishop Patrick Ziemann after he admitted to an affair with a Ukiah priest.

Last week, the newly installed Bishop Daniel F. Walsh apologized for the “deep and painful” wound caused by the sexual misconduct. “I acknowledge the hurt, pain, and anger of many and apologize to all victims who suffered because of these failings,” he said. “I assure you that together we will strive to see that such cannot and will not happen again.”

THOMAS PLANTE, a professor of psychiatry at Stanford University School of Medicine, has worked with 40 to 50 priests facing problems with pedophilia and sexual abuse. Plante, who edited the 1999 book Bless Me Father for I Have Sinned: Perspectives on Sexual Abuse Committed by Roman Catholic Priests, says that despite the high degree of publicity, Catholic priests are no more guilty of sex crimes statistically than clergy in other faiths, including Jewish rabbis and Protestant pastors.

“There are 60,000 Catholic priests in the United States. Anytime you get that kind of group, there’s going to be trouble. But the Catholic clergy is a juicy target because the celibacy and hierarchy are weird to people outside of the faith.”

During his 12 years working with men of the cloth, he has treated priests suspected of being pedophiles, alcoholics, and drug addicts. He also works with depressed clergy and does routine psychological evaluations for different dioceses.

Plante says that 90 percent of the sexual abuse occurring within the church involves adolescent boys. Sometimes he treats the priests alone, and other times they are sent to inpatient services at St. Luke’s Hospital in Maryland. He believes the popular press fixates on the sex crimes of priests, but admits that the church has had a troubled past plagued by secrecy and denial.

He stresses the need for good screening, good training, and addressing troubles as soon as they emerge.

“Some people have risk factors. They were abused themselves, have poor boundaries or a history of inappropriate behavior,” Plante says. “These are risk factors.

“Historically, there was a lot of denial and repression in the Catholic Church,” he adds. “But I think that’s changing a lot. If somebody is accused, they immediately go into treatment these days–although it’s an individual thing and varies from diocese to diocese.”

The Diocese of San Jose has developed what it calls a “sensitive incidents team” to take reports and investigate complaints. According to Father Francis Cilia, the vicar for clergy, the team reviews the report to determine if it is grounded. If it is and involves a child, the case is turned over to police. If it involves an adult, the case is treated as an ethical breach and is usually handled internally.

“I’ve only been through that once, thanks be to God. Not for me, but for another priest,” Cilia says. “Our lawyer is part of that, because we don’t just talk in terms of church law. We have a very definite policy. Both clergy and volunteers have to sign it, go through orientations. We are supposed to be friends of those who are hurting, not victimize them further.”

TERRIE LIGHT says that getting her long-awaited apology during Lent fulfilled a dream for her. But she and Sister Flannery agree that it’s only the beginning of a dialogue that is long overdue. They hope that the national frenzy over Oakland’s reconciliation service leads to more services, but ones that don’t lose the focus on mutual healing.

“What is most important is the dialogue that goes on,” Flannery says. “We need to listen to survivors, because we don’t have a clue about how destructive this experience can be.”

“It deeply affected my relationship with God. I had no hope,” says Rita, another survivor, who was abused by her Protestant pastor. Rita received $8,500 for counseling in an out-of-court settlement with the pastor.

Light says that other services have failed to take the needs of survivors into account. For example, the Archdiocese of San Francisco hosted its service to apologize for general abuse at what is the scene of the crime for many: a church.

“Some survivors get horrible post-traumatic stress syndrome when they are surrounded by crucifixes, stained glass, Roman collars,” Light says. “It signals danger.”

Light applauds the diocese for taking a more direct stance, establishing clear rules and sending priests into therapy. But she also wants to bring the issue out of quiet talk among “sensitive incidents teams” and into the public eye. She says that she would like to see the names of problem priests published on the Web, a kind of Megan’s Law for clergy.

She says that while the Pope has recently apologized to those the church failed to help, she’s still waiting for him to apologize for the sins of the fathers.

“I cannot tell you how many survivors have written to the Pope–not only survivors, but mothers whose children have committed suicide after being molested,” Light says. “And I don’t know of anyone who’s gotten a reply.”