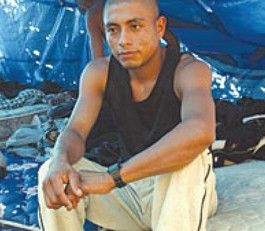 “We have stereotypes about farmworkers here. We see Mexico as one homogeneous place,” says award-winning journalist and documentary photographer David Bacon. “But there is just as much diversity in Mexico as there is here in the United States. It’s a wonder we don’t understand more about the country that lives right next to ours.”These deep-rooted stereotypes are part of the challenge Bacon faces as an artist: how to convey the issues critical to indigenous farmworkers—not as laborers, but as human beings with a story. Bacon’s work is part of the larger exhibit “Living Under the Trees,” appearing now through Oct. 10 at the Santa Rosa Junior College Art Gallery. The exhibit is a look into the lives of farmworkers whose work—bearing the fruits of our harvests right here in the North Bay and greater California—is greatly undermined. Bacon’s candid, emotionally stunning photography captures what Henri Cartier-Bresson once referred to as the “decisive moment”—recording people and life as they ebb and flow. No frills attached. Yet part of Bacon’s success in representing indigenous farmworkers through his photographs comes from his background as an activist. His project developed nine years ago when he was a farmworkers’ union organizer and began taking photos of a group from Oaxaca, who set up encampments outside Santa Rosa. They had stretched tarps from one tree to another, unable to afford housing.”I’m doing this in a way to help people win social justice here in the United States,” Bacon says. “Part of that means we have to help people in general figure out the social reality of who these immigrants and farmworkers are and the rights they deserve.”A full slate of events is planned. On Monday, Sept. 14, at noon in the SRJC Newman Auditorium, Bacon will present his lecture, “Living Under the Trees,” which speaks to the need for immigration policy reform in California.

On Saturday, Sept. 12, from 4pm to 7pm, the SRJC Art Gallery presents a community forum, “Living in Sonoma County.” On Tuesday, Sept. 15 at noon, the Art Gallery hosts a performance and poetry reading with Ballet Sonatlan and Armando Garcia-Davies, showcasing the ethnic threads of dance and language that preserve Mexican traditions. A celebration of Mexican Independence Day will take place on Sept. 16 at noon in the library quad. “Without the work of farm laborers, we wouldn’t eat,” Bacon says. “This exhibit is sort of like giving credit to them for the work they do.”