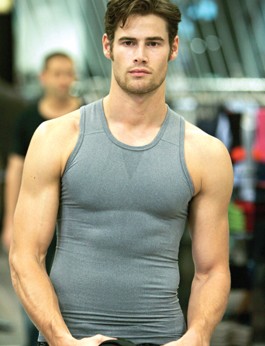 WAITING TO EXHALE: For less than $100, men can be as uncomfortable as women!

Weary, perhaps, of trying to oppress fickle, headstrong teenage girls, the fashion industry has apparently moved on to an easier target: dudes. In recent weeks, the New York Times, Time magazine, ABC News and various other media outlets have all featured enthusiastic coverage of mirdles. They eliminate inches in seconds, the coverage advises. They’re surprisingly comfortable. And they’re flying off the shelves at trend-setting retailers.What, you may be asking, is a mirdle? A mirdle is a male girdle, a constrictive garment designed to streamline a fashion-conscious man’s problem areas—his too-generous love handles, his silhouette-ruining belly. Mirdle manufacturers obviously never refer to their products as mirdles, because girdles are feminine and mirdles are anything but. Equmen describes its Core Precision™

T-shirt as a “high-performance undergarment . . . engineered with HELIX-MAPPING™ technology” to “sculpt, tone and improve body mechanics.” The makers of the RipT Fusion mirdle call their garment a “classic men’s undershirt injected with steroids.”

So if you were thinking that mirdles sound a little girly, well, relax, tough guy. Mirdles are totally masculine. They’re not girdles. They’re T-shirts with very, very firm handshakes.

The high-performance, steroid-injected verbiage is needed, one suspects, because waiflike metrosexuals who have no trouble slipping into their junkie-fit skinny jeans don’t need mirdles. Nor do gay gym bunnies who spend so much time working out they make Michelangelo’s David look like Homer Simpson. Instead, it’s the guys who spend all day glued to the sofa pounding burgers and Miller Draft with their bros as they watch the game on ESPN but still want to look good in their striped shirts when they hit the clubs at night in search of fresh flesh.

It’s ironic, isn’t it? For years, Madison Avenue has been bombarding impressionable young lunkheads with an incredibly limiting and destructive view of masculinity. To express your essential maleness, Madison Avenue insists, you must eat triple cheeseburgers laden with enough strips of bacon to reconstruct an entire pig, and spend hours perfecting the art of beating up tiny cartoon adversaries or pretending to dunk on Shaq.

To affirm your male autonomy, you must choose 12-packs of bland American beer over hot and compliant blondes whenever such decisions present themselves. But despite your beer-swilling, burger-eating, videogame-playing lifestyle, you can’t take refuge in shapeless dad jeans or sacklike Tommy Bahama camp shirts. You’ve got to look good in fitted polos and stretch twill chinos.

Thus, the recent proliferation of torso-enhancing undershirts, one-piece body trimmers, waist eliminators, high-compression singlets and extreme chest-concealer tanks. The makers of mirdles position their products as revolutionary, liberating devices: finally, men get to take advantage of the constrictive, fat-binding garments that women have been using to present an idealized image of themselves for centuries!

But will today’s dudes really fall for such rhetoric? Forty years ago, in the autumn of 1968, the members of a group called New York Radical Women protested at the Miss America pageant in Atlantic City by dumping sacrificial girdles, padded bras and high heels into a “freedom” trash can. “No more girdles, no more pain, no more trying to hold the fat in vain!” they chanted as they shed themselves of the “instruments of torture” that enslaved them to “ludicrous beauty standards.”Like the members of the New York Radical Women, men have traditionally associated underwear with cultural as well as physical constriction. The laid-back iconoclast who lives life outside the dictates of society typically favors boxers over briefs. The most autonomous, most empowered choice is to go without underwear entirely, i.e., to “free-ball” or “go commando.”

Several generations ago, most men decided that even soft cotton undershirts were somehow cramping their style, and today the planet’s archetypal dude’s dude, actor and semi-nudist Matthew McConaughey, has repeatedly demonstrated that it is possible to survive for weeks at a time, in virtually any setting, without any torso-encumbering garment whatsoever.

And yet at Saks Fifth Avenue in New York, at least, men are reportedly lining up to pay as much as $119 a pop for an Equmen Core Precision™ T-shirt. This seems like an awful lot to pay for an undershirt—especially a clingy, emotionally manipulative undershirt that squeezes itself around your stomach and intestines like a hungry boa constrictor and claims to support you while sucking the life out of your self-esteem. But whoever said that men were rational creatures?