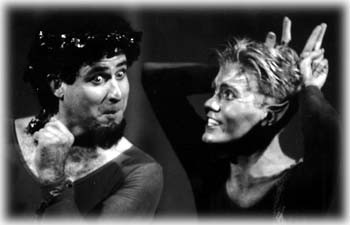 All the world’s a stage in summer

THE PLAY’S the thing in the soft gloamings of the warming season, and theatergoers come in droves when the stage is built of sweet-smelling fresh planks and the walls are, well, when there are no walls at all.

Because, by and large, in a Sonoma County summer the acts play best outside. With the exception of the outstanding season offered by Summer Repertory Theatre at the Santa Rosa Junior College and Santa Rosa High School auditoriums, it is the parks and wineries that ring out with wordplay, swordfights, and passion.

The Sonoma Valley Shakespeare Festival begins the season with a scamper and a bang, starting all three of its repertory pieces on the same weekend, June 20-22. Leading off on the 20th with A Midsummer Night’s Dream the day before the solstice proper, the fest next explores the dark-blooded wisdom of Hamlet on the 21st, and then cracks the whole thing up with the Reduced Shakespeare Company’s version of The Complete Works of William Shakespeare (Abridged) on the 22nd.

Sonoma Valley’s artistic director, Carl Hamilton, has flirted in the past with mounting non-Shakespearean plays for his annual Bard bashes. However, he plays it relatively straight this year, throwing only the Abridged zinger–which he double-zings by casting three women in the main roles. What is actually unusual is Hamilton’s choice to produce the classic Hamlet, a play best savored in deep winter moods redolent of Elsinore itself.

“This will be our fourth tragedy,” says Hamilton. “I just throw them in there.” Belying the notion that summer audiences want only laughter and cross-dressing, Hamilton is confident that a big chewy play with plenty of dead bodies strewn limply across the final scene will work for the picnic crowd, particularly since the recent release of actor Kenneth Branagh’s fine interpretation of Hamlet is still lingering on the big screen.

These three productions will chase one another through the summer, playing well through the end of September and being produced mainly on the stage abutting the graded slopes of the Gundlach-Bundschu winery (the Fieldstone Winery will also serve as a short-term venue). Wine will be available by the glass or bottle, and it’s highly recommended that you bring a hamper full of goodies to accompany it.

The Avalon Players continue to snatch food off of patrons’ plates in mid-soliloquy at the Buena Vista Winery. Players’ director Kate Kennedy ensures that plenty of tomfoolery crops up in her lively productions–they may not always be faithful to the text, but they’re always faithful to the sense of fun intended. This year they assay the shipwreck-and-separated-twins comedy of Twelfth Night, a play whose characters include one Sir Toby Belch and the venerable Sir Andrew Aguecheek, guaranteeing that there won’t be a dry eye in the house–too much laughter. The Players move off the hillside and ring their production around Buena Vista’s fountain this year, their season beginning July 19 and running through the end of September.

Over in Sebastopol, Main Street Theatre’s annual Shakespeare in Ives Park is also staging Twelfth Night. As with last year, when both Main Street and the Valley of the Moon company did The Tempest, these two productions promise to be vastly different. Main Street executive director Jim dePriest is breaking his own rules this year, restaging the play not at his Santa Rosa­based Sonoma County Repertory Theatre as in years past, but at Santa Rosa’s Finley Park for the end run to the inside season.

With his usual forthrightness, dePriest admits that his reasoning for this change is that “the run just becomes too damn long for the actors” if the Shakespeare production is restaged for a full slate of performances inside SCR.

Among dePriest’s regular stable of fine actors for Twelfth Night is Eric Thompson, who has been responsible for the smashes over at the Valley of the Moon Shakespeare company in Glen Ellen, a troupe that is bowing out of the Bard battles for this summer. Losing Thompson (who directed last year’s fine Tempest and out-Pucked the competition in A Midsummer’s Night Dream the year before) was blow enough for VOM director Kathleen Mason, but losing their space in the glorious Dunbar Meadow proved really disheartening. Finding temporary staging at the Sonoma Developmental Center, Mason and company finally decided to pack it in when providing actors for the roles proved too difficult.

Fabric Museum and Workshop in Philadelphia