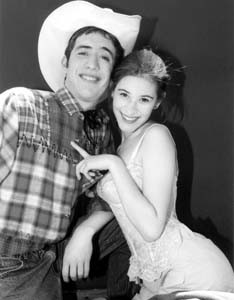 The Comedy of Errors.

The Sonoma Valley Shakespeare Festival gears up for the new millennium

FOR A GUY who’s been dead some 400 years, the late William Shakespeare is pretty damn lively. The playwright’s actual corpse is as quiet as Yorick’s skull, of course, but his enormous body of work can’t be entombed in classrooms and libraries; it keeps spilling out onto stages, turning up in novels, and creeping out into popular culture at movie theaters across the country.

Hollywood, for one, just can’t seem to get by without the old guy. The past year has seen big-screen versions of A Midsummer Night’s Dream, The Taming of the Shrew (retold in the teen flick 10 Things I Hate about You), and, most notably, the playwright’s own life in Shakespeare in Love.

Audiences of live theater can’t get enough of him either. In the United States alone there are over 100 active Shakespeare festivals, including nearly a dozen in Northern California.

Not bad for a man once dismissed by Tolstoy as “insignificant and immoral.” Criticism can’t kill the Bard, and neither can too much love–his vividly drawn characters have even survived being played by the likes of Mel Gibson and Leonardo diCaprio. Attacked or embraced, the Swan of Avon sails blithely on, preparing to greet the new millennium as the most-produced playwright in the English language.

So what’s the secret? How do 400-year-old plays about homicidal kings and suicidal princes continue to pack theaters and movie houses?

Carl Hamilton, co-founder and artistic director of the Sonoma Valley Shakespeare Festival, which kicks off its eighth season on July 2, offers one answer, but it’s got nothing to do with what your English teacher taught you about iambic pentameter. The plays continue to succeed, Hamilton says, because they have a lot in common with daytime television.

“They were the soap operas of their day,” explains Hamilton. “There’s love, there’s passion, there’s violence, sex, humor … You just sit there and say, ‘God, this guy wrote this stuff 400 years ago, and he’s saying exactly what I feel about love and hate and philosophy.”

Since 1992, without corporate sponsors or grant money, Hamilton, who is 42, and his crew of collaborators, including his wife, Jamie, have been staging Shakespeare’s work amid the rolling vineyards of the Gundlach-Bundschu Winery, pouring a considerable amount of time, energy, and cash into their endeavor (Hamilton estimates that he has put some $30,000 of his own money into his company over the years).

The result has been a modest but steady audience of tourists and locals who sprawl out in lawn chairs to enjoy the company’s low-key approach to the Bard’s work. You won’t find special effects or big-budget productions here; you will find a casual atmosphere that includes a celebratory glass of wine for the cast after performances.

“We could get much higher attendance if we wanted to be aggressive in our marketing and put some money into advertising, but we just don’t have that kind of style,” Hamilton says. “My philosophy is that we’re a local coffee-shop kind of thing. We’re not real interested in becoming this huge organization. That would really ruin it.”

This year, the festival is staging The Tempest and Rosencrantz and Guildenstern Are Dead, playwright Tom Stoppard’s absurdist take on the lives of two minor characters in Hamlet, which is the festival’s annual “Shakespeare on the Fringe” show. Hamilton, who works a day job as a counselor for troubled kids, will direct a farcical production of The Comedy of Errors set in the rough-and-tumble atmosphere of the mining town of Virginia City.

“Setting it in the West somehow makes it more accessible to people–they’re not intimidated,” Hamilton explains.

Of course, not everyone enjoys seeing new interpretations and settings for Shakespeare’s work. Hamilton recalls getting an angry letter six years ago from a staunch traditionalist from Windsor who was upset about a production of The Comedy of Errors.

“My director did it in sort of a vaudeville routine, which really worked, but [the Windsor lady] hated it,” Hamilton recalls with a laugh. “She said, ‘I brought my children to see Shakespeare, and what do I get? The Three Stooges running around onstage!’ What she didn’t understand is that The Comedy of Errors is a vaudeville routine. It’s slapstick, it’s incredible, it’s absurd.”

It’s that kind of rigidity with regard to Shakespeare that Hamilton is determined to fight. He speaks with considerable heat about what might be called the English-class approach to the playwright’s work, an attitude he often encountered while studying theater at UC Davis. The plays are meant to be performed, not read, Hamilton says, and they’re meant to be enjoyed by ordinary people, not endlessly vivisected by college professors.

“I think we have to battle those cultural snobs out there who put Shakespeare in this elitist, high-culture niche,” he says. “We’re always going to have to fight that. What I try to do with theater, both with Shakespeare and with contemporary theater, is bring it down to this level of ‘This is not brain surgery. This is theater; we’re here to entertain you, and hopefully we’ll make you think, too.’ And if we don’t, well, that’s OK.”

Of course, there are those who wonder what Shakespeare’s fate will be in the new century. Will Hollywood and the theater community run out of new ways to reinterpret the plays that have, after all, already been monkeyed around with for 400 years? Hamilton, who is already planning for next year’s millennium festival, doesn’t think so.

“The more I do Shakespeare, ” he says, “the more I realize that every time you look at it, you find something new. As old as it is, as many times as you see a production, you can come back to it over and over again. I think that’s why people keep coming out to the festival. It’s a good time.”