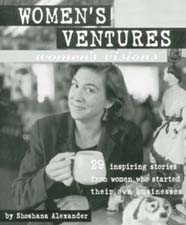 PICK UP A BOOK, grab a steaming mug of whatever, and cozy up to the fireplace . . . oh wait, you’ve been doing that all summer. Well, maybe the fall will be everything our August wasn’t, in which case you’ll need sunglasses and a pool to lounge beside while exploring the latest offerings from Sonoma County authors, who’ve been hard at work producing everything from poetry to novels to children’s books. Below you’ll find reviews of local lit by Yovanna Eileen Bieberich, Yosha Bourgea, Liesel Hofmann, Shelley Lawrence, Patrick Sullivan, and Melinda Wright.

With feminist Susan Faludi now contending that men have been “stiffed,” Sebastopol author Shoshana Alexander’s book may add fuel to the fire. Alexander offers provocative examples of the sharp, spunky women who have contributed to a revolutionary change in the once male-dominated realm of visionary entrepreneurs. The profiles, based primarily on personal conversations, focus not so much on the types of businesses as on the spirit that nurtured them. The women vary vastly in age, ethnic background, socio-economic class, and geographic location. And among them are former Sebastopol resident Rosemary Gladstar, who in 1971 founded Rosemary’s Garden; and Martha Lindt and Carol Rivendell, who run Sebastopol’s Wild Women Adventures.–L.H.

Children of Sonoma Valley Where Oaks Play Catch with the Sun Poems and art selected and introduced by Arthur Dawson (Kulupi Press; $10)

Two lines of poetry: “Give me the lightning of forever darkness” and “when the world is puddle-wonderful.” Which one is by a famous poet, and which by a grammar school student? One is from some amazing poetry by Sonoma Valley fourth- and fifth-graders who were among hundreds taking part in a two-year series of poetry workshops on the valley’s cultural and natural history. Mercifully unsaccharine, the poems’ imagery evokes such a vivid sense of place that it may transform the reader’s own perceptions of this unique region. (The first line quoted above was written by Stevie Raaka of Sonoma; the second by e. e. cummings.)–L.H. Trane DeVore series/mnemonic (Avec Books; $10)

This slender volume of quietly precise poetry could be read in 20 minutes–but should be savored for much longer. DeVore, who grew up in Petaluma and graduated from Sonoma State University, puts together words in a way that is economical but never stingy. Even his shortest poems have evocative power: “think of orbits/planets and scandal.”–P.S.

Carol Lee Flinders At the Root of this Longing: Reconciling a Spiritual Hunger and a Feminist Thirst (Harper SanFrancisco; $13)

How can a woman be truly independent if she is somewhat dependent on a higher power? With a deep understanding of feminism, mysticism, and world religions, Petaluma author Carol Flinders takes us on her personal journey as she tries to resolve this paradox in her latest book, which is just out in paperback. Drawing on experiences as a mother, academic, teacher–and even as a concerned stranger during the Polly Klaas abduction–Flinders arrives at the conclusion that both feminism and spirituality must coexist for either to be fully realized.–M.W.

Billed as “the Gary Larson of the Native American cartoon world,” artist L. Frank here assembles her idiosyncratic line drawings into book form for the first time. Hardly likely to kick up the kind of fuss that “The Far Side” enjoyed in its heyday, Frank’s one-panel cartoons are nevertheless more complex than they seem at first glance. All the writing is backward, an allusion to the artist’s dyslexia that has the effect of forcing the reader to slow down and savor each image.–Y.B.

Editor Gary Gash has compiled a set of poems–including contributions by such local authors as Joanne Kyger and Peter Levitt–that puts the Buddha within easy reach even for everyday agnostics. The poems, which range from Beat-style paragraphs to funny haikus to rhyming couplets, manage to hit the spiritual nail right on the head, leaving the reader with both a greater understanding for all things dharmic and a small sigh of contentment.–S.L.

According to some, that indelible phrase from the Declaration of Independence–“the pursuit of happiness”–is a no-brainer. For if you seek happiness, it will elude you; it comes only unbidden. Of a different mind is Santa Rosa author and teacher Michael Goddart, who aims to put you on the road to “lasting happiness,” to take you to “the source of all Bliss.” He has crafted exercises and activities to help awaken and develop your relationship with your Higher Power by expressing 33 “essential spiritual virtues,” such as discipline, positive thinking, acceptance, and gratitude. (Caveat: Not for aficionados of the writings of Krishnamurti.)–L.H.

“Moons come, and moons go. Baby Whale grows and grows.” This eloquent tale of a baby whale’s life under the waves is as educational as it is poetic. Illustrator Jon Van Zyle adds a great depth of beauty to the book with his ocean-scapes. Children will enjoy the book’s afterword, which contains fascinating information about the lives of sperm whales.

“Trrrick or trrreat, smell my feet. Give me something good to eat. If you don’t, I don’t care–I’ll pull down your underwear!” Halloween is almost here, and Froggy is hard at work deciding what costume to wear. Will he be a vampire? Will he be a ghost? This latest book in London’s popular Froggy series is a playful tale for young children. The seasonal story is colorfully illustrated by Frank Remkiewicz.

Shawn and Keeper and the Birthday Party (Dutton Children’s Books; $13.99)

It’s been said that dogs are man’s best friends, and Shawn’s best friend is indeed a lovable canine named Keeper. In this delightful story, Shawn and Keeper are both turning 6, but their birthday party takes a mysterious turn when the cake disappears. Where did it go? Hallmark card designer Renee Williams-Andriani illustrates this festive tale.

C. D. Payne, author of Youth in Revolt: The Journals of Nick Twisp, strikes again with Civic Beauties, the fictional account of 15-year-old twins whose father has been chosen as the Republican vice presidential candidate (his motto: “putting God back in religion”). The narrative maintains a wicked political wit while alternating between the perspectives of two wise-beyond-their-years middle-class teens, bad-girl Toni and angelic, accordion-playing Cara. The dysfunctional characters occasionally break into song; these absurdly intelligent commentaries are spouted by the girls, various political figures, and hormonally charged teenage boys. A must-read for anyone with a sense of humor.–S.L.

This unusual love story set in the west county focuses on the relationship between a 15-year-old boy and the narrator, a somewhat older woman (we never find out exactly how old). The boy is born under mythic circumstances in a haunted Petaluma farmhouse: “One afternoon the ghost kicked their dog, and soon after they moved to Occidental, where rent was cheaper, the ghosts were friendlier.” As the narrator falls deeply in love, she grapples with the emotional and moral issues involved. Meanwhile, the west county works its fey woodland magic, confronting the couple with unicorns and UFOs and police search helicopters. –P.S.