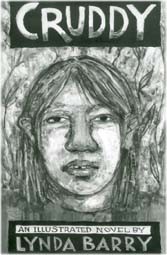 ADOLESCENCE is hell, as any teenager will tell you. It is the least forgiving time of life, combining as it does a heightened self-awareness with the presence of forces beyond our control. The natural order of things shifts, becomes unnatural and unpredictable, and warps us in ways we can’t possibly be ready for. However supportive our families may be, the metamorphosis is always a fearsome test of our being.

Out of this dark soil comes Cruddy (Simon & Schuster; $23), a shocking, grimly funny novel that tests its readers all the way from the disturbing dust jacket to the haunting final page.

The author, Lynda Barry, is best known for “Ernie Pook’s Comeek,” a nationally syndicated comic strip that runs in many an alternative newspaper. Fans of the strip already know that Barry is a master at evoking teen angst in all its awkward splendor, but even they will be taken aback by the intensity of her illustrated novel.

Cruddy, set in 1971, is the story of Roberta Rohbeson, a 16-year-old girl who lives “on a cruddy street in the cruddiest part of a crudded-out town.” After a bad acid trip that ends at the police station and leaves her grounded for a year, Roberta begins to write an account of what happened five years before on a blood-soaked road trip with her father.

Interwoven with this tale, which unfolds in a series of flashbacks, is the story of the older Roberta’s drug-modified adventures with a loose-knit group of misfits: Vicky, a fast-talking liar; her handsome brother, The Stick; and The Turtle and The Great Wesley, two eccentric escapees from the Barbara V. Herrman Home for Adolescent Rest.

In the pre-PC world of the early ’70s, there is no hint of “Just Say No” propaganda. The primary concern of these kids is getting high, as often as possible and by any means available. Considering their dysfunctional home lives, that’s hardly surprising. The adults of Cruddy are hideous creatures who heap emotional and physical abuse on their children. In an environment devoid of compassion, substance abuse is the least of sins.

Spurred on by a strange drug called Creeper, Roberta tells her friends about the journey she took with her father in search of three suitcases stuffed with inheritance money. Roberta’s father is a terrifying person, an ex-Navy meat-cutter and a violent alcoholic. He disguises his daughter as a mentally retarded boy named Clyde.

The unlikely pair leaves behind a trail of dead bodies and burned buildings as they cross the country in pursuit of the inheritance. Throughout the ordeal, Roberta struggles to maintain her sanity. Though she is subjected to death threats, brutal beatings, and the sexual predations of older men, she is never a victim.

What keeps the novel compulsively readable is Barry’s gift for idiom, her perfect ear for the language of white trash. Roberta/Clyde, the protean narrator, is a fearless observer of her world: “There are rotten porches and slamming doors and constant yelling inside the houses and constant yelling outside the houses,” she says of her neighborhood, “and two doors down there are two little fish-faced girls who just stand in the mud and do contests of who can scream the loudest.”

The subject matter of Cruddy is challenging, and in less capable hands it could have been an overwrought mess. Barry doesn’t pull her punches, but the ferocity of her narrative is never sensationalistic. Each of the 55 short chapters is a left hook driven by purpose. The cumulative effect is draining, but also exhilarating.

Cruddy is a book you have to keep putting down–and then, immediately, pick back up again.