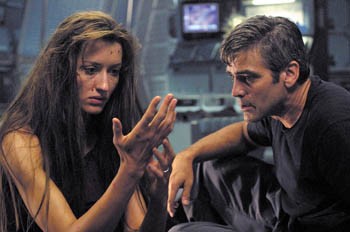 This week and next, theaters offer two serious warnings against idealized love: the highly recommended documentary Daughter from Danang, and the feature film Solaris, which I can’t urge on anyone. Both suggest that love is a fiction that we weave around someone lost or unknowable.

Solaris is Steven Soderbergh’s remake of the 1972 Russian cult classic. It features George Clooney as Kelvin, a scientist of the near future. After three bleak years grieving for his dead wife, Kelvin is ordered to space station Prometheus, in orbit around the planet Solaris, where an exploration mission has gone drastically wrong.

Kelvin hears cryptic warnings of trouble from the survivors. Solaris, a blurry, blue orb, manifests lost loved ones by reconstituting them. Shortly, Kelvin’s dead wife, Rheya (Natascha McElhone), appears at his bedside alive, happy, and simple-hearted, as she wasn’t in life. Kelvin fears a trick, a psychological weapon, as anyone might who’s read Ray Bradbury’s Mars Is Heaven or seen various knockoffs of this story on Star Trek. It’s a science-fiction plot so familiar its next destination ought to be Futurama.

In flashbacks, we see how Rheya and Kelvin found and lost each other. The couple squabbled. She was fatally depressed, her religious faith mocked by Kelvin’s cynical friends. Now that Rheya’s back, Kelvin’s uncertainty makes her question her own existence. Since Solaris–acting out of mercy or malice–can only reconstitute Rheya from Kelvin’s memories, the new creature is confused. She realizes she’s composed out of a string of incidents and has no inner life (“I’m suicidal, because you’re remembering me as suicidal”).

In Daughter from Danang, the lost woman who rematerializes is the Vietnamese birth mother of an adopted girl. Brought to America in 1975 as part of Operation Babylift, Heidi Bub grew up in Tennessee and South Carolina. Heidi’s new mother urged her adopted daughter to keep her Eurasian-ness a secret. After a seemingly permanent break with her adopted mom, Heidi travels to Vietnam to visit her real mother, Mai Thi Kim.

Bub is a chubby, guileless Southern woman who had probably never seen a spring roll in her life. Arriving in the land of her birth, Heidi can’t match her happy, vague childhood memories with the crowded city and its overwhelming heat. As we see Vietnam through Heidi’s eyes, we hear Mai Thi Kim’s tale. During the war, she had to concubine herself to survive after her husband went to fight with Ho Chi Minh.

What follows isn’t a hugfest. Mai Thi Kim is deluded too. She has an unreal vision of her daughter’s life that has sustained her during the hard years. Mother Mai makes the assumption that every American is rich. Bub certainly isn’t; she’s married and lives in Navy housing in Rhode Island.

Naturally, Mai assumes that Heidi is going to be the angel who will help her long-lost family. Since Heidi doesn’t respond to hints, the family has to get a little more insistent–you are taking Mom back to America, aren’t you? You grieve both for the hardships of Bub’s Vietnamese family and for Bub’s good-hearted American ignorance.

Solaris probably deserves a few tears of frustration too for its noble but doomed attempt to re-create director Andrei Tarkovsky’s chilly style. Clooney is one of the few actors with the old-movie confidence and handsomeness–the American-ness–to carry a romance. But it’s hard to look at Clooney and fear for his rationality, as you must for Kelvin’s.

Soderbergh uses McElhone’s Bette Davis eyes for their uncanniness, not for the usual glamour. Still, McElhone doesn’t suggest hidden reservoirs. The two leads never seem to click. Of course, this may be deliberate; just because Kelvin loves Rheya doesn’t mean she has to be profound, or even real.

Solaris and Daughter from Danang draw their power from that emotion felt in our dreams–that 3am recollection of unfinished business with the dead–with lovers or family who are out of the picture and aren’t coming back. At their most pessimistic, these films indicate that love boils down to guilt. Clooney surrenders to the gravity of guilt, in accordance to Tarkovsky’s Russian fatalism. Yet that surrender is given an upbeat, feel-good note: it’s a wonderful afterlife. Heidi Bub, in contrast, frees herself from her dreams at a painful cost, and it’s her story that seems the most jagged and authentically sad.