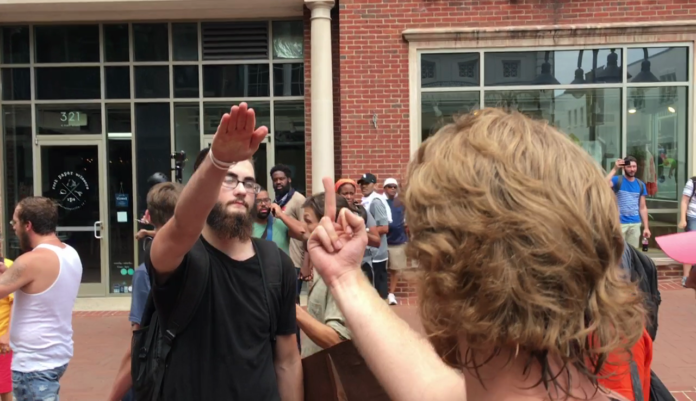 Skinhead in the Game

Confederate flags at the Petaluma July 4 parade. Racist graffiti scrawled on an RV in Healdsburg. Allegations of bias crime in gay-friendly Guerneville and a Sebastopol Road dollar store. Identity Evropa stickers at Santa Rosa Junior College and in downtown Windsor. Clearly, the North Bay hasn’t been immune to an upsurge in white nationalism, hate crimes and bias-related outbursts over the past few years.

Last July, a report from state Attorney General Xavier Becerra found a 17 percent jump in hate crimes in California between 2016 and 2017. As the AG prepares this year’s “state of hate” report, there’s a big anti-hate event at the Congregation Shomrei Torah in Santa Rosa this weekend. Saturday night starting at 7pm, the documentary White Right—Meeting the Enemy will be screened, and former white supremacist Arno Michaelis will be on hand to give a talk.

Michaelis left his skinhead past behind and in 2017 coauthored The Gift of Our Wounds with Pardeep Singh Kaleka, whose father was murdered at the Milwaukee Oak Creek Sikh Temple massacre in 2012.

Michaelis has come a very long way from his skinhead days, when he would get drunk, crack skulls, and play in a race-metal band called Centurion—while also organizing the world’s largest racist skinhead organization.

He started writing My Life After Hate in 2007 and published it in 2010; the book pulls no punches about Michaelis’ violent, hateful past and how he came to eventually knock on doors for Barack Obama’s presidential run (and form an education-and-healing nonprofit called Life After Hate). His exit from the skinhead movement came about, Michaelis writes, when he became a single parent at the age of 24 and realized that—like many of his friends—he was headed to prison or an early death if he didn’t change his ways and his perspective on his white identity.

“I know where racists are coming from, and I pity them as much as I pity their victims,” he writes. “Hate takes a terrible toll on life. Fear is indeed the mind-killer. We all have the option of living a life of love and compassion, and I’m here to say that the world really is as beautiful a place as you care to envision.”

The North Bay is, by and large, a beautiful place but there’s always room for more love and compassion, even here. In January, a Santa Rosa woman was sentenced to three months in jail and probation after being convicted by Sonoma District Attorney Jill Ravitch for racially charged hate crimes committed against a Mexican woman and her children at a dollar store in Santa Rosa.

“Fortunately, we rarely come upon hate crimes in our community,” Ravitch noted at the time of the sentencing. “But when the facts support charging a hate crime we will do so and will seek an appropriate sanction, including incarceration.”

Guerneville’s gay community has also been victimized by hate, according to the D.A. Last month, a man was sentenced to nine months for a “criminal threat constituting a hate crime” which took place in 2018 when the perpetrator hurled a homophobic slur and threatened to blow up a gay barista at Starbucks (along with Safeway and the Guerneville Sonoma County Sheriff’s Office substation).

The man had previously stolen a gay pride flag from the town flagpole. When he was sentenced, Ravitch said in a statement that “in a community known for tolerance of all sorts of people and issues, this conduct was rightly prosecuted and punished. The outcome of this case should serve as a strong message to anyone considering the use of hateful speech or conduct.”

A third alleged hate crime occurred in Santa Rosa earlier this year when a 22-year-old man beat up a 67-year-old Korean man and tried to rob him. Police scanner reports posted online reported that the assailant questioned the man’s citizenship while assaulting him—“Are you from the United States?”—leading to a hate crime charge. The alleged assailant was charged with elder abuse, battery with serious bodily injury, and robbery. He was sent to jail, and bail was set at $35,000. What’s the takeaway?

“Every minute you spend hating someone is a hole in your life,” Michaelis writes in My Life After Hate. Come hear him talk about it on Saturday.