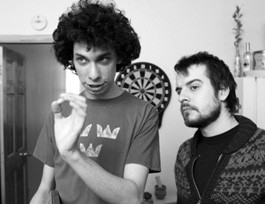 Among the best animated shorts, two are from Pixar, and both are derived from a fab-1950s style. The brilliant Day and Night, which introduced Toy Story 3, is likely this year’s winner, while Geefwee Boedoe Let’s Pollute is a UPA-Zagreb-style educational film exhorting the watcher to make the world more filthy.

Bastien Dubois’ Carnet de Voyage, Madagascar uses almost every technique of animation to tell the story of a trip to Africa. The island has been popular in animation for its cute lemurs; it’s seen in a different light during Dubois’ visit for a ritual called “the turning of the dead.”

The British CGI cartoon The Gruffalo features a top-drawer vocal cast (Robbie Coltrane, John Hurt, Helena Bonham Carter) who enliven the tale even as the film stretches out to nearly a half-hour. And most surprising is Shaun Tan and Andrew Ruhemann’s Lost Thing, wherein a young man with a cigar-shaped head discovers a 15-foot tentacled hermit crab living in a red cast-iron boiler, and takes it home to an atmosphere of despair and dystopia.

Of the live-action short films, four are matters of life and death; the best one is merely about love. Na Wewe from Belgium is clearly the front-runner, a UNESCO-approved film set in Burundi in 1994 about a massacre that can’t get started because of the problem of separating Tutsi from Hutu (some of the passengers are both, some are neither, some are frustratingly in between).

The possible upset from the inspirational genocide shoe-in is Ian Barnes’ Wish 143. Dying and 15, David (Samuel Peter Holland, an actor going places) is visited by the British version of the Make-a-Wish foundation and knows what he wants: to get laid. The newspapers pick it up (“Brave Cancer Boy Vows to Lose Virginity”), but it takes the reluctant connivance of the hip priest at the hospice to try to make it so.

Along with The Crush, an Irish comedy-drama, and The Confession, by Estonian director Tanel Toom, there’s Luke Matheny’s God of Love (above), the best of the bunch. Taking place in a Brooklyn milieu of cabaret music, Matheny stars as a singer in love with his female drummer. The fantasy has the heavens giving him a dart that for six hours makes women open to the possibility of falling in love. The black-and-white photography, the Dave Brubeck soundtrack, the enticing faces and deft acting all make this one’s coolness seem more original than merely salvaged and borrowed.