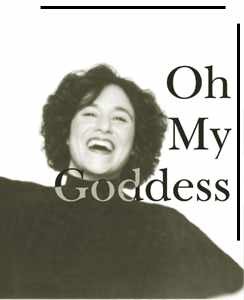 All Smiles: Sherry Glaser brings her latest effort, ‘Oh, My Goddess!,’ to Sebastopol for its second-ever performance.

PAGAN TRADITION may have begun with folks frolicking in wooded glens and wearing nothing but wine stains on their chins and scented garlands in their hair, but lately the pagans have been as serious as mud. The very term is more likely to conjure up an image of deadly intent–an Adult Child of Alcoholics smelling of musk and inexplicably shaking a feathered rattle–than of anything even remotely relating to fun (unless, of course, you are yourself a deadly intent musk-smelling ACA’er with a feathered rattle, and then we may as well be looking in the mirror).

Sherry Glaser, a pagan earth-mother goddess-loving artist with a sense of humor, is out to change all that. Sure, she used to be a lesbian (c’mon, who didn’t–in one life or another?) but is now happily married to the father of her children. Her long-running show Family Secrets recently caused the San Francisco Chronicle‘s staid critic Peter Stack to gush that she “is nothing short of amazing.” She brings her newest effort, Oh, My Goddess! An Outrageously Sacred Comedy, to the Sebastopol Veterans Auditorium on Dec. 21.

A two-character show utilizing Glaser’s unique ability to literally shift shapes (in Family Secrets she shrugged into the aspect of an aging Jewish man as deftly as she morphed into his sullen teenaged daughter), Oh, My Goddess! concerns two very disparate personages: a young Chicano man named Miguel and the Goddess herself–the familiarly named Ma.

“I think this piece is a cumulation of where all my life is going right now,” says Glaser by phone from her home in the Mendocino wilds. “And I think that it’s important comedy. I think that it’s the kind of comedy that we’re really missing–the type that affects us while it moves.”

All seriousness aside, Oh, My Goddess! has a serious touch of the sillies. “Miguel was channeling Kumbiya for a while, but now he’s come upon Ma, and this is his greatest channel to date,” she cracks. “But he’ll be making a lot more money at seminars, because people will pay a lot more money for Ma than for Kumbiya.”

Miguel will be familiar to those familiar with Family Secrets as the one who impregnated daughter Kahari, née Fern, a goddess worshiper and a lesbian until she got accidentally knocked up–is this beginning to sound familiar? The longest-running off-Broadway one-woman show ever produced, Family Secrets has spilled the guts of Glaser’s family’s secrets for the last seven years in places as far flung as South Africa and Canada. “Yes, it’s my family. They adore it,” she asserts of this piece that has won both the L.A. Drama Critics Circle Award for best solo creation and the L.A. Weekly‘s Drama Critics Award.

When Glaser created Oh, My Goddess! for the Michigan Women’s Music Festival last year, she decided to continue her exploration of the character of Miguel. “Miguel is my spiritual side,” she says. “First it was just to play this sexy macho guy that I really liked to play in my early days of improvisation. And then I thought, I don’t want to just play a stereotype, I want to break that and make him somebody really different, someone,” she laughs, “who is into colonics and vegetarianism.”

As for Ma, well, Glaser says it best. “She’s the biggest Jewish mother of us all,” she boasts. “She doesn’t have commandments, she’s got rules. She’s so full of love, and she says everything that every mother’s ever said.” Adopting a New York Yiddish accent, Glaser intones, “‘Why? Because I said so. I’m the mother.’

“Stuff like that,” she says. “She loves the children–the audience–so much and she’s appalled because of the state of things. What Our Father Who Art in Heaven has wrought. She’s not even talking to him at this point.

“She’s very upset with him,” Glaser adds, breaking back into Ma. “He didn’t even tell the kids about her. She just went off for a little while and now she’s back and look at the place! The place is a mess! The water is undrinkable, the air is unbreathable!

“See?” she continues in her own tone, “She’s a real mother. She’ll talk about the rules, like the Ten Commandments, but they’re real rules. The first rule is to love yourself, the second rule is, oh–I’m not going to tell you,” she breaks off with a laugh.

Does Glaser adhere to these rules?