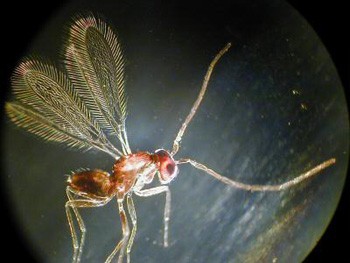 Airy Fairy: The fairy fly, shown, is the world’s smallest insect. Its relative ‘Anagrus epos’ may be a vintner’s best friend.

Controlling Pierce’s disease one pest at a time

It’s related to the world’s smallest insect, the fairy fly, but this tiny wasp, Anagrus epos, may single-handedly take down one of the wine industry’s biggest bullies: the glassy-winged sharpshooter.

A stingerless parasitic wasp, Anagrus epos has one goal in life: to lay its eggs inside sharpshooter eggs. In spring, the sharpshooter, which spreads Pierce’s disease to thousands of acres of California grapevines, lays neat rows of 12 to 20 eggs on the underside of leaves. The wasp comes along after it and inserts up to 10 of its eggs into every one of the sharpshooter’s eggs. Then, the new wasps hatch before the sharpshooter and promptly devour it.

The California Department of Food and Agriculture (CDFA) imported the wasp from Minnesota and is in the process of releasing it into 50,000 square miles of Southern California. Though this isn’t the first wasp that has been released to fight the sharpshooter, Anagrus epos has a major advantage over the others: its ability to survive the harsh Minnesota winters. Since the wasp would presumably live through the Southern California winter, it would be there to breed alongside the sharpshooter in the spring, a time when other wasps are dormant.

In addition, the fact that the wasp lays far more eggs than the sharpshooters does more than just increase its odds of survival, explains CDFA spokesperson Jay Van Rein. “It lays 10 eggs where other wasps lay only one egg per sharpshooter egg, so the multiplication table is much more aggressive with this wasp,” he says. “It will be an interesting little biology experiment.”

Officials won’t know whether or not the wasp will destroy the sharpshooter’s breeding cycle until next spring.

“In the spring, we will go out into the fields and collect sharpshooter eggs to look for the wasp’s exit holes in the egg sack‹they make very distinctive exit holes,” says Van Rein. “That’s how we will know if they survived or not.”

There is a good chance that the wasp will survive since it has already been proven to work against the sharpshooter. Not long ago, Hawaiian officials released the wasp in response to a rapid spread of sharpshooter infestation. Within a few months, traps that had previously been catching dozens or even hundreds of sharpshooters were only catching one or two.

The wasp is part of CDFA’s overall strategy to fight the sharpshooter. It was released through the Sharpshooter Biological Control Program that originally started at UC Riverside. The strategy is funded by a tax of $2 for every $1,000 worth of grapevines in California. In June, 90 percent of California grape growers voted to extend the tax through 2011 to help continue fighting the infestation.

The glassy-winged sharpshooter probably came up from Mexico on nursery plants. In the 1990s, it spread Pierce’s disease to thousands of acres of vineyards in Temecula Valley. Though infestation has not yet appeared in Sonoma and Napa counties, every year the sharpshooter seems to get a bit closer. This year, Napa’s agricultural commissioner’s office found sharpshooter eggs on four separate shipments of plants. All of the eggs were destroyed and sent to Sacramento for positive identification. Last year, a colony of sharpshooters was found in a factory outlet mall in Vacaville.

Fighting a bug from Mexico with a bug from Minnesota may seem strange, but it is the best solution considering that the sharpshooter is so spread out, hides so effectively and has few natural enemies here.

“The wasp is an important part of biological control,” says Nick Frey, executive director of the Sonoma County Grape Growers Association. “These non-native species are not likely to have natural predators, so their populations get out of control.”

Non-native species have caused hundreds of ecological problems in California. They have wiped out many native species and cause things you see every day, like mistletoe slowly taking over an oak tree or clouds of starlings swooping in on crops. As a result, when introducing a new non-native species into the state, the CDFA has an elaborate quarantine set up to ensure they are not making a bad situation worse.

“We’re confident this is a fairly safe program,” says Van Rein. “The wasp can only survive on a very narrow range of bugs‹essentially leafhoppers. There are some native leafhoppers, but not many.”

Pierce’s disease is caused by a bacterium, Xylella fastidiosa, that slowly kills grapevines, forcing growers to pull them up. That same bacterium is also responsible for diseases in almonds, peaches, plums, and alfalfa, which could mean a multicommodity, multistate problem, according to the CDFA.

Even if the wasp slows the larger threat of the glassy-winged sharpshooter, local growers will still have to continue to deal with the blue-green sharpshooter, explains Frey.

“The wasp probably won’t attack it, unfortunately,” he says. “There’s a huge difference between the size of the egg sacks of the two species.”